My experience with dance pretty much begins and ends with all the times I’ve watched Center Stage and then pranced around my house pretending to be a ballerina (most, but not all of these times were when I was young enough for it to be at least moderately acceptable). My experience as a Taylor Swift fan, however, is much more robust. Since I love Taylor and genuinely enjoy working out (unless it involves yoga), I decided to try Body by Simone, the workout class that Taylor (and other famous ladies, like Jennifer Aniston, Sarah Hyland, and Nina Dobrev) can’t get enough of.

I didn’t go in expecting to see any celebrities (I’m sure Taylor springs for private sessions), but I actually might have. Julie Benz (of Buffy the Vampire Slayer and Dexter fame) may have been in my class. Or else a lovely woman who looked a lot like Julie Benz was in my class. Either way, she was great. Everyone in the class was great. It was one of the most positive groups of people I’ve ever shed sweat around, but more on that in a bit.

What is Body by Simone? 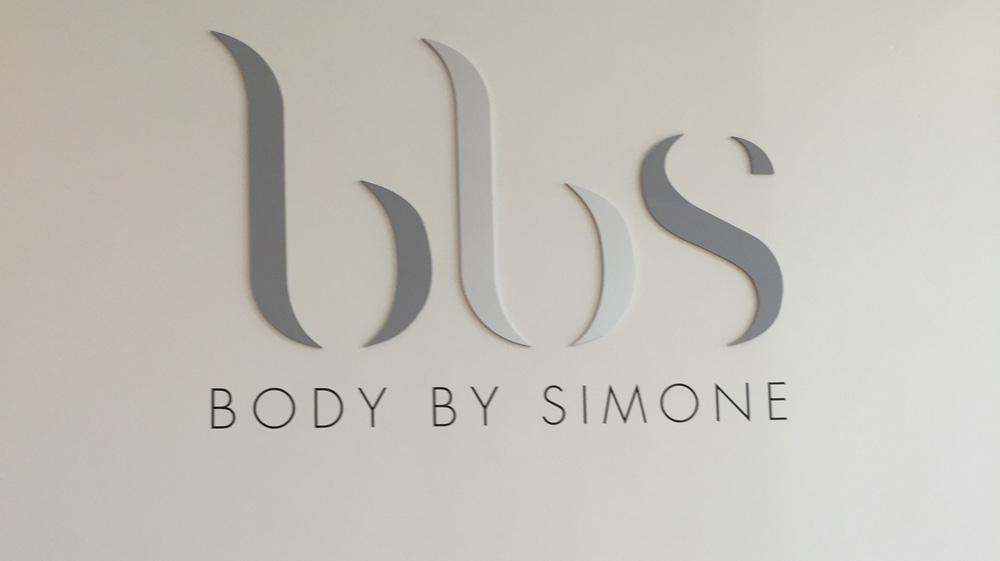 Body by Simone is an exercise program (/way of life?) created by Simone De La Rue, a dancer and personal trainer who was looking to create a program that would allow people to work out hard while avoiding injuries. The classes are heavily-influenced by Simone’s background in dance. In addition to the popular dance cardio class (which I took), other classes offered include trampoline cardio, full body, and a class focused on hips, thighs and “buns” (because Body by Simone is absolutely the kind of place where butts are “buns”).

I knew going in that I was up for a lot of dance and a lot of sweating. There is no light warm up, no slow run through of the moves. I would describe the class as dancing meets a traditional workout set to music and once the class starts, it starts and you have to keep up or just let your body spaz out and hope for the best. I went the spazzing out route — and I wasn’t alone. The class was pretty evenly split between front row wonders — people like Maybe Julie Benz, who were clearly class regulars and had committed a lot of the moves to memory — and back row spazzes, just trying to keep up. It might sound like that’s a bad thing, like it would embarrassing or uncomfortable to be spazzing about in the back of the class, but it wasn’t. Body by Simone was one of the most positive workout environments I’ve ever been in.

A few times, my fellow Back Row Spazzes and I (although, to be fair to the rest of them, I was certainly the spazziest) fell so gloriously, hilariously behind that the instructor would slow down for just a moment to review the move and try to catch us up. Failing that, she told us to not worry about getting the moves right. The goal, she made it clear, was to try our best, keep moving, and — most importantly — have fun. It was like being part of a very competitive (because the only thing I worried about was stopping — I knew I looked ridiculous, but if I kept moving, that truly felt like a win) sleepover dance party…that I’d paid almost $30 to come to.

The class is intense. If you’re a trained dancer or just more coordinated than me and able to keep up with quick moves that change every 8-count, then you will both have fun and look very cool (Maybe Julie Benz and the rest of the Front Row looked very cool). If you’re not trained in dancing and a total spaz who just likes jumping around and shaking your arms and generally embracing your inner “Shake It Off” outtake, you’ll still have a lot of fun. You won’t look cool, necessarily, but you’ll feel exuberant and that’s honestly better than looking cool any day of the week (but I imagine that the exuberant feeling extends to the Front Row, Looking-Cool people as well).

But back to how intense it is. There were definitely moments during the class when I wanted nothing more than to stop, collapse, and down as much water as I could. The vibe in the class is so upbeat and “we’re-all-in-this-together” though that I never gave in to the urge to stop. And by the end of the class, I felt amazing — accomplished, energized and simultaneously tired as hell (in the best way).

Body by Simone only has three locations — one in New York City and two in Los Angeles — meaning availability is scarce. Class prices vary by location (at the West Hollywood studio, where I took a class, a drop-in session runs $28, but at the Chelsea location in NYC, the same class would cost $35). Body by Simone also offers discounted bundles of classes and monthly unlimited plans. The unlimited plans cost $375 at the Chelsea location and $299 at both Los Angeles studios.

However, if you don’t live in NYC or L.A. (or can’t justify the steep price tag associated with working out at the BBS studios) and want to experience the workout, Body by Simone sells workout DVDs for a much more reasonable $29.95.

Overall, I can’t say I could justify the cost to workout at Body by Simone on a regular basis, but if I were in the market to spend ~$300 a month to stay in shape, I’m sure there are worse (or at least less fun) places to spend it.