It has been 17 years since the terrorist attacks that occurred on September 11th, 2001.

I can’t forget how blue the sky was when I woke up on the morning of September 11th, 2001; the color will always stay in my mind. I had just started my sophomore year of high school on Manhattan’s Upper East Side. That day, I didn’t have to be at school until second period, which meant I’d traveled from my home in Brooklyn during rush hour.

As I walked into a building on campus, I heard a student tell the elevator operator that a plane had hit the World Trade Center. I scoffed at the idea of it doing any damage:

“It was probably a Cessna; it just bounced off the building and hit the ground.”

Not long after I made that comment, another plane would hit the other tower. An hour and a half later, both towers would lay in heaps of burning rubble on the ground. Nearly 3,000 innocent people would be killed.

We wouldn’t learn the reality of the devastation until noon, and even then, we weren’t given many details.

I immediately pulled out my cellphone and called my dad.

He was supposed to be going to work at the United Nations that morning, and I was worried that the U.N. would be the terrorists’ next target. He answered; he told me what had happened, what was happening — and that he’d never even made it out of our apartment. He told me that he saw the plane hit the second tower live on television. He told me about the Pentagon getting hit, and the plane crashing in Pennsylvania. “The city’s on lockdown right now,” he said. 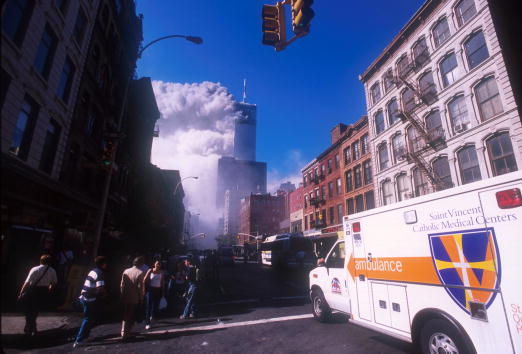 We weren’t allowed to have our cellphones on during school hours, but on that day, the rule was lifted. My dad told me to keep my phone on so that he could check in with me and come up with a contingency plan to get me home.

“Can I use your phone? a classmate asked after seeing me talk to my dad.

I called my dad back to ask for permission — my phone was prepaid because I only used it to let my parents know when I was coming home from school; I had to make sure I was allowed to use the minutes. Given the circumstances, my dad obviously gave me the go-ahead. 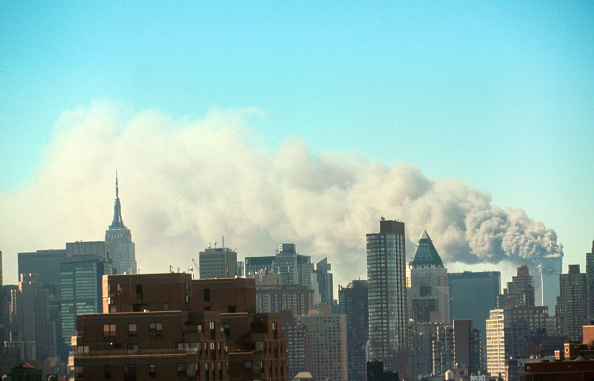 Soon I would discover that, though many of my classmates had cellphones, theirs weren’t working.

I became the go-to person for other teenagers desperately trying to reach their families.

Other kids I didn’t know at all came to me, asking if they could use my phone to call relatives and let them know they were safe and still at school. Classes had been pretty much suspended since no one could focus on learning anything, so I stayed glued to my phone — either talking to my dad or using it to help people make contact with the world outside our campus. I even received a few calls from strangers and relayed messages back to their kids.

There was a sense of camaraderie amongst the student body that day that never really existed again.

We were in this together, knowing that something scary was happening all around us, while being completely oblivious at the same time. As the day went on, the school administration still wasn’t sharing information. My dad was giving me updates via CNN and the local news: “Everything below Canal Street is closed off and they’re evacuating all of Lower Manhattan. It’s completely covered in smoke, ash, and debris.”

I’d repeat what my dad was hearing back to my classmates, and we all huddled together as we tried to figure out how we were going to make it home. 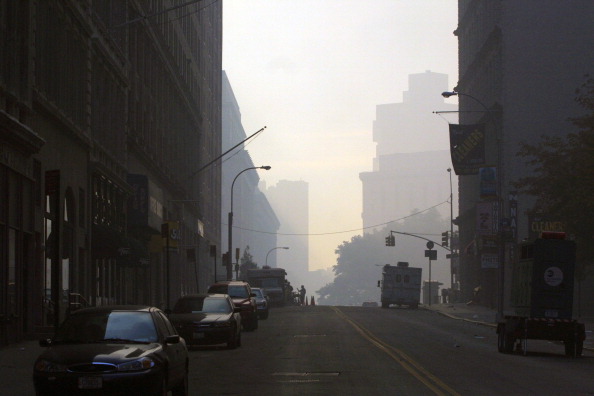 My trusty Nokia brick phone remained a beacon, a way to maintain contact with the outside world amidst the hushed chaos within our school.

Being so far uptown, it felt like we were in a different world. The sky was still blue when we were finally let out of the building, despite the horror that had occurred miles away, despite the fact that the world as we knew it had changed forever.

Miraculously, my phone still had enough minutes for me to call my dad before I got on the subway. Back then, there was absolutely no cell signal on the trains underground, and I was traveling a completely new subway route, all alone.

September 11th will forever be a part of me.

Every year, my dad and I remember that day and the days that followed. We remember that crappy little black brick phone, how it somehow managed to keep working, to keep so many people connected. I don’t know if my phone is a part of anyone else’s memory of 9/11, but I do know it was integral to keeping all of us safe and informed on a day full of uncertainty.