Here’s more proof Millennials are being judged too quickly

Despite their reputation for renting, we know that millennials want to own homes. Now a new report from Bank of America sheds even more light on their attitudes toward home buying.

Related Article: Mortgage Rates Are Set to Jump. Here’s How to Lock In a Low Rate Now

In fact, not only do millennials, aged 18-34, plan to own a home, they plan to own multiple homes throughout their lifetimes: 68 percent of millennials say their current home is merely a stepping stone towards the home they want to end up in, compared with 36 percent of homeowners across all generations, the survey found. (This makes sense, considering that older generations are more likely to have already moved or bought homes more than once.)

It’s been estimated elsewhere that a more than a third of millennials are already homeowners.

Related Article: This Book About Rent Won the Pulitzer—Here’s Why You Have to Read It

And they’re putting their money where their mouths are: 40 percent of older millennials (aged 25-34) say they’ve already started to plan for a down payment, compared with 35 percent of the general population. At the same time, first-time buyers are not really certain how much they’ll need for a down payment. As you’ll see from the graph below, there is no true consensus on the matter: 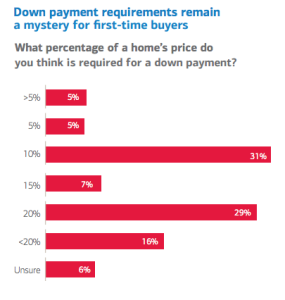 (The answer is somewhat nuanced but the conventional figure is 20 percent.)

And here are their principal factors influencing the timing of wanting to buy a home:

“If there’s one thing to take away from our report this year, it’s that forward-thinking millennials are buying homes – and they’re happy with their choice,” says BofA’s D. Steve Boland in the report. “This growing group of millennials is seeing the value of getting into a home…Clearly, the millennial generation is coming of age and realizing it might not make sense to wait anymore to purchase their first home.”

Among millennials who already own a home, 79 percent said their homes are having a positive impact on their long-term financial picture, with 86 percent responding that owning a home is more affordable than renting.

The bank surveyed 4,906 adults, including 1,268 current homeowners and 435 prospective homeowners.

This article originally appeared in Money by Rob Wile.