I was browsing The Broad, Los Angeles’ contemporary downtown art museum, when I saw them. Amongst tour groups of Midwestern-looking families and old folks, they were an anomaly—a young Black couple, no older than maybe 17, walking hand-in-hand, excited. The girl, with hair swept-up in a high bun and baby-hair laid, turned to her man every few minutes, pointing to different paintings, squeezing his hand a little harder when she saw something she really liked.

The scene made me smile. I remembered my first teenage love. He was a photographer; I was an appreciator. Going to galleries was our thing. Never mind that the other patrons were as white as the walls the paintings hung from; never mind that the art was made by people I’d never heard of. The experience of appreciating art was ours, too.

I reminded myself of this truism throughout the week I recently spent in L.A. taking in artwork at high-brow exhibitions and galleries in tucked-away communities. While there were some really challenging moments for this Black girl, there were also some real glimmers of hope that color might soon be appreciated on skin the way it is on canvas.

“What I didn’t expect is that for some, I would become the thing on display.”

Now, I don’t claim to be an art aficionado. I can keep up in conversations, but a long time ago I stopped trying to make sense of work I don’t really get (again, my teenage boyfriend was the one putting me on to most artsy things). For me, it’s about the art of writing. That’s why I was in L.A. for the week, to pen a piece about Frieze, the international art fair with annual showcases in London and New York. For the first time, it was happening in Los Angeles. With work from 60 of the most significant and forward-thinking galleries across the West Coast and around the world, this was major. Curators, collectors, and casual art lovers alike would be posting up at Paramount Pictures to take it all in.

I wanted to experience the Frieze hype, but I also knew the hype around L.A.’s own art scene; I’d visited the California African American Museum on a past trip, and got my whole life dancing in the courtyard at their Can’t Stop, Won’t Stop open house. And my friends had been buzzing about local institutions like The Underground Museum, the Arlington Heights cultural hub founded by the late Noah Davis with the intention to bring “museum quality art” to a working class Black and Latinx neighborhood.

What I didn’t expect is that, for some, I would become the thing on display. I was stomping through Frieze wearing a black crewneck, layers of gold necklaces, a plaid mini skirt, Doc Martens, and a fresh braid-out for my free-form ‘fro. I was confident my look would fit right in. I was serving a lil’ “Art Heaux,” you know? Instead, I felt out of place almost immediately. I could smell the money in the room and feel the air of elitism. Glamorous-looking women with blunt, blonde bobs quickly strutted past me in stilettos, their neon fur stoles casually tossed over the shoulders of expertly tailored blazers.

Was I actually just a faux pas? When a small, gray-haired, white woman with a bunch of press badges dangling from her neck tapped me on my shoulder and asked to take my picture, I thought, okay, maybe I’m good here.

I turned to her, cocked my head to the side, and half-smiled—my signature pose. “You know, I’m from Tanzania, so I’m very in tune with this sort of thing,” the photographer said, once she’d gotten her shot.

“Black faces and Black bodies, I love them,” she gushed. “And, you know, there are always so few of you at these types of events, so when I see one of you, I have to take a picture.”

Because I’m at the point in my life where I’m not surprised by the caucasity, I just laughed at her. But she was right. As I surveyed the room, there were just a handful of Black folks, and the photographer was already on her way to chase down the rest of them.

Of course, it’s no surprise the art world has long lacked diversity, but it still stings. What’s exciting, though, is that L.A. now has several change-makers committed to painting a new picture—many of them Black women.

“Of course, it’s no surprise the art world has long lacked diversity, but it still stings. What’s exciting, though, is that L.A. now has several change-makers committed to painting a new picture.”

Take Naima J. Keith, for example, the newly named VP of Education and Public Programs at the Los Angeles County Museum of Art (LACMA). She says a reassessment of the exhibitions that museums choose to mount is a great place to start. LACMA’s recent efforts are evident with its Charles White retrospective, allowing museum-goers to see an impressive collection of a hundred drawings, prints, and oil paintings depicting Black life by a man and civil rights activist who was born and raised on the South Side of Chicago. LACMA also hosted Charles White exhibitions at two other locations: one at a namesake elementary school in L.A., where the artist once taught, and the other at the California African American Museum.

At The Broad, I’d taken a guided tour with a docent who straight-up told me that the museum hadn’t done the greatest job of diversifying its collection in the past, but, “We’ve started to make a dedicated push to change that,” she affirmed. Once we made our way through the grand space of Jeff Koons’ balloon dogs and Robert Therrien’s giant table—both of which made great Instagrammable moments—we stopped in front of a wall of mixed media collages by African American artist Mark Bradford. His 10-foot “I Heard You Got Arrested Today” is a fractured blend of white, black, and red meeting at the center of the painting like a spine. Viewing it gave me the most visceral reaction, like my body was being cracked open. I’d never seen or felt anything like it.

Bradford is a Los Angeles native and the co-founder of Art + Practice, an art and social service organization that offers professional development support to young adults in the foster care system. Their campus features an on-site gallery of museum-curated contemporary art in all media, with a special emphasis on social commentary.

That was the most refreshing part of the experience; from well-endowed arts institutions to mid-sized galleries to grassroots movements powered by the city’s youth, L.A.’s art community seems to possess a real commitment to community engagement and accessibility. Providing opportunities to engage with art was considered a duty, an act of service. Nearly all of the places I explored had no cost to enter.

When I spoke with Jamillah James, a Black woman recently appointed curator of the Institute of Contemporary Art, LA, she affirmed the charge to make art inclusive.

“If you consider the history of museums and the perception of exclusivity that hangs over them, it’s a matter of necessity for cultural workers in institutions today to do less navel-gazing and more looking at the world outside of the museum,” she told me. “Museums should work towards a model that privileges equity, openness, and a commitment to offer opportunity, support, and space to artists of all backgrounds, as well as remain cognizant and sensitive (and responsive) of the complexities of the world in which we’re all living and working. These are among my primary concerns in the work I’m doing and the artists I support through my research and exhibition making.”

When I stopped by the ICA, James was there late, putting in the hands-on work. We walked through the gallery, and she introduced me to the art of Lucas Blalock, who transforms what he calls “pathetic objects,” like shopping bags and garden gloves, into the unusual. Looking at his pieces filled me with a distinct sense of whimsy. Blalock had never had a solo show in the U.S. until James had chosen to feature him at the Institute. 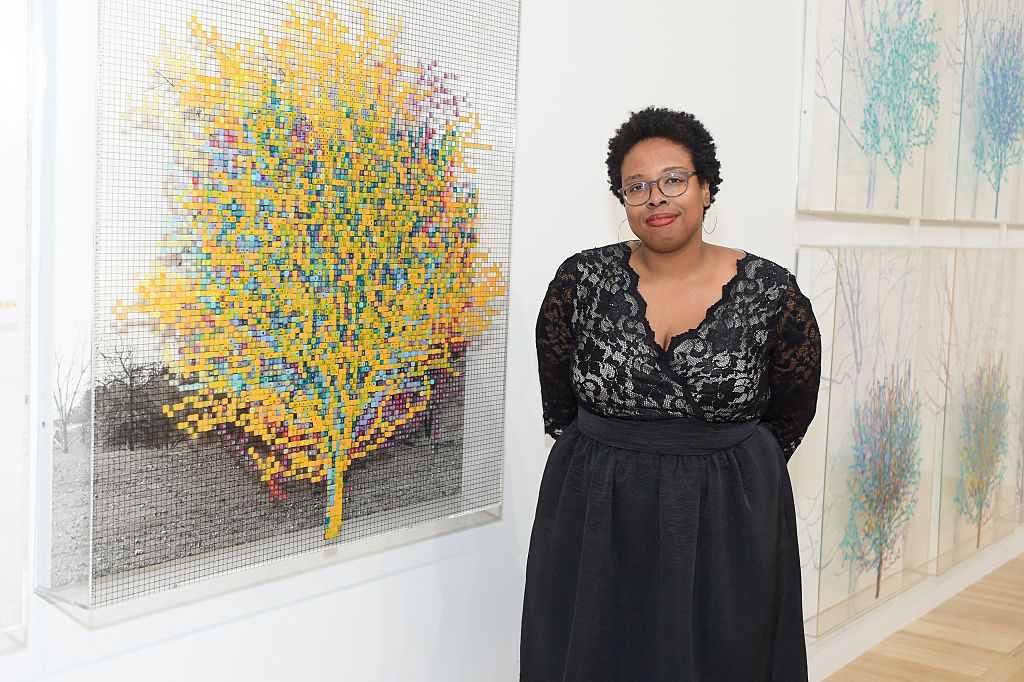 On my last night in the city, a friend invited me to a fundraiser for an arts collective called SON., which aims to explore “the multidimensionality of Black male identity” via music, film, art, culture, and activism. Fittingly, the fundraiser was held in a historic barbershop in South Central called Touched by an Angel. The money raised went to funding a discussion series, radio show, and exhibitions, all to be held at the barbershop; in the words of the founder, Justin LeRoy, “We wanted to take art out of the white cube and see what happens when the destinations for it are places we call home.” On the walls of the warmly lit barbershop were vintage posters of Black men with fresh Caesars and fades; at a table in the back, a few liters of wine and some six-packs of Modelo; at the DJ booth, Pierre Davis and Arin Hayes, the duo behind No Sesso, an L.A.-based agender fashion brand that debuted in February at New York Fashion Week.

I’d seen No Sesso’s designs for the first time last summer at a fashion show at the Getty, a sprawling museum in the hills. It was striking—a museum with art from the Middle Ages and Black models dressed in stylized basketball jersey dresses and floor-skimming tulle gowns, slow-strutting their way across a limestone courtyard. This location was intentional. “I’d taken a trip to the Getty and noticed all the paintings were really fab, except you never see any Black people in them,” says Davis. More than just fashion, No Sesso considers itself a lifestyle.

After filling my plastic cup with a decent red, once again, I got my life on the dance floor at an art event. Young artists, musicians, and creatives of color breezed easily through the space, dapping each other up. People I didn’t even know pulled me into embraces like I was the homie. I felt relevant and beautiful. That’s true art appreciation.