I tried Korean peel-off eyebrow tint, and my life has been changed for the better

By Rachel paige
Each product we feature has been independently selected and reviewed by our editorial team. If you make a purchase using the links included, we may earn commission.

Let me state upfront that I am not the beauty guru here at HelloGiggles. The rest of the editorial staff usually gets mailers like lipstick and snail cream, while I get things like talking Finding Dory action figures and ice cream. So…

With that being said, the sudden influx in trying things, especially Korean beauty products, has me intrigued. In truth, I kinda have reactions to just about everything I put on my face — and the HG team can attest to that — but when I heard about peel-off Korean eyebrow tint, it felt like something I could try that wouldn’t end horribly for me. Also, I really do not like my eyebrows, and I’ll do just about everything to create the illusion that they are big and beautiful. Korean eyebrow tint, it is!

I do not know the first thing about what tint product is the ~best~. I base 90% of all my purchases off of what other reviews are saying, and did the same here. I ended up going with Etude House Tint My Brows, in two different colors, brown, and grey brown. I am a super pale human, but also I have very dark hair. My hair is brown, but it’s so dark it’s almost black. Other reviews were commenting that the grey brown worked best for dark hair. I decided to hedge my bets and buy two of them, to test them both out.

They arrived in a simple package, with Angry Birds on the front. Why, I do not know. I suddenly find myself very worried about trying this stuff out. 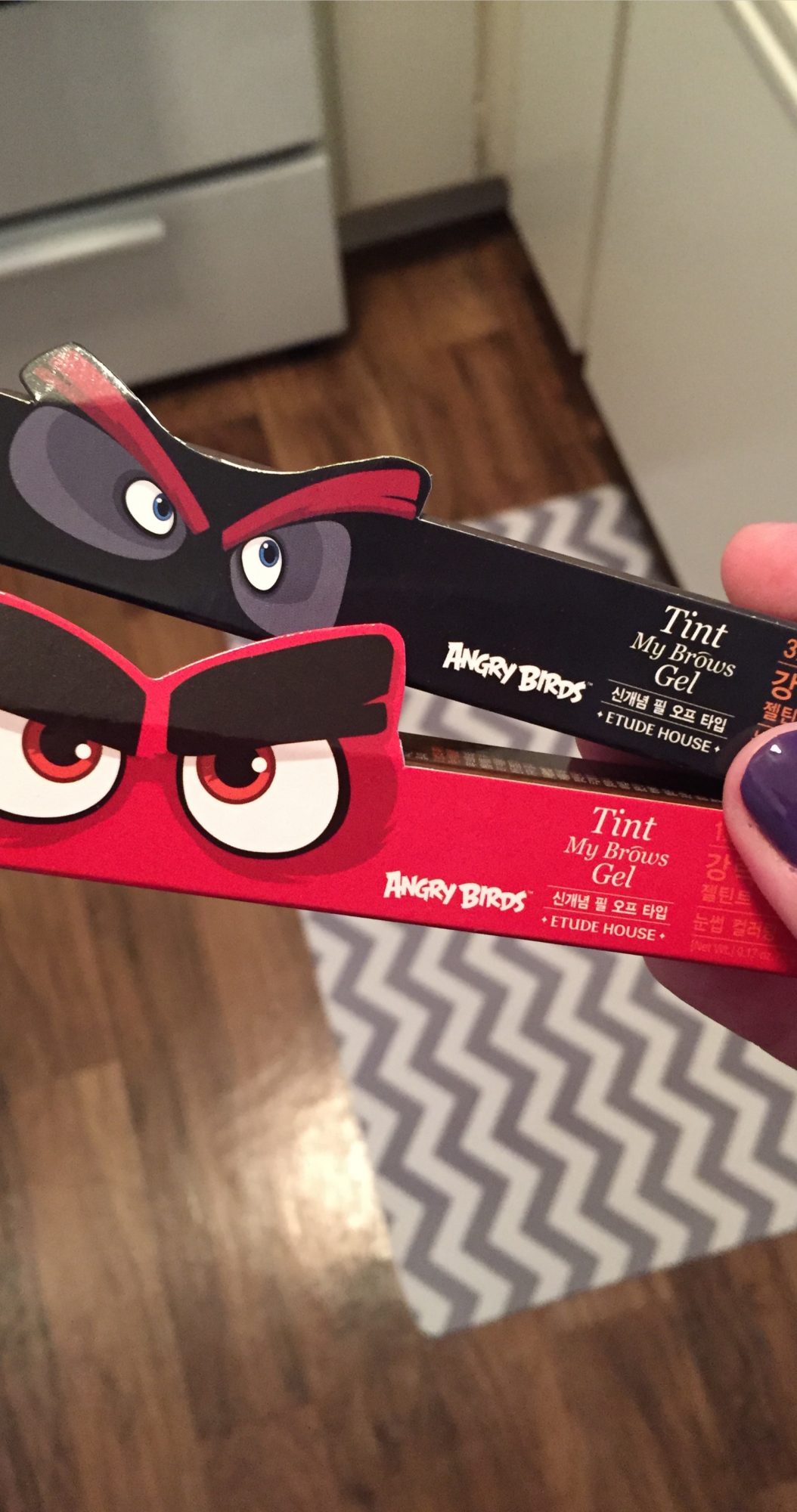 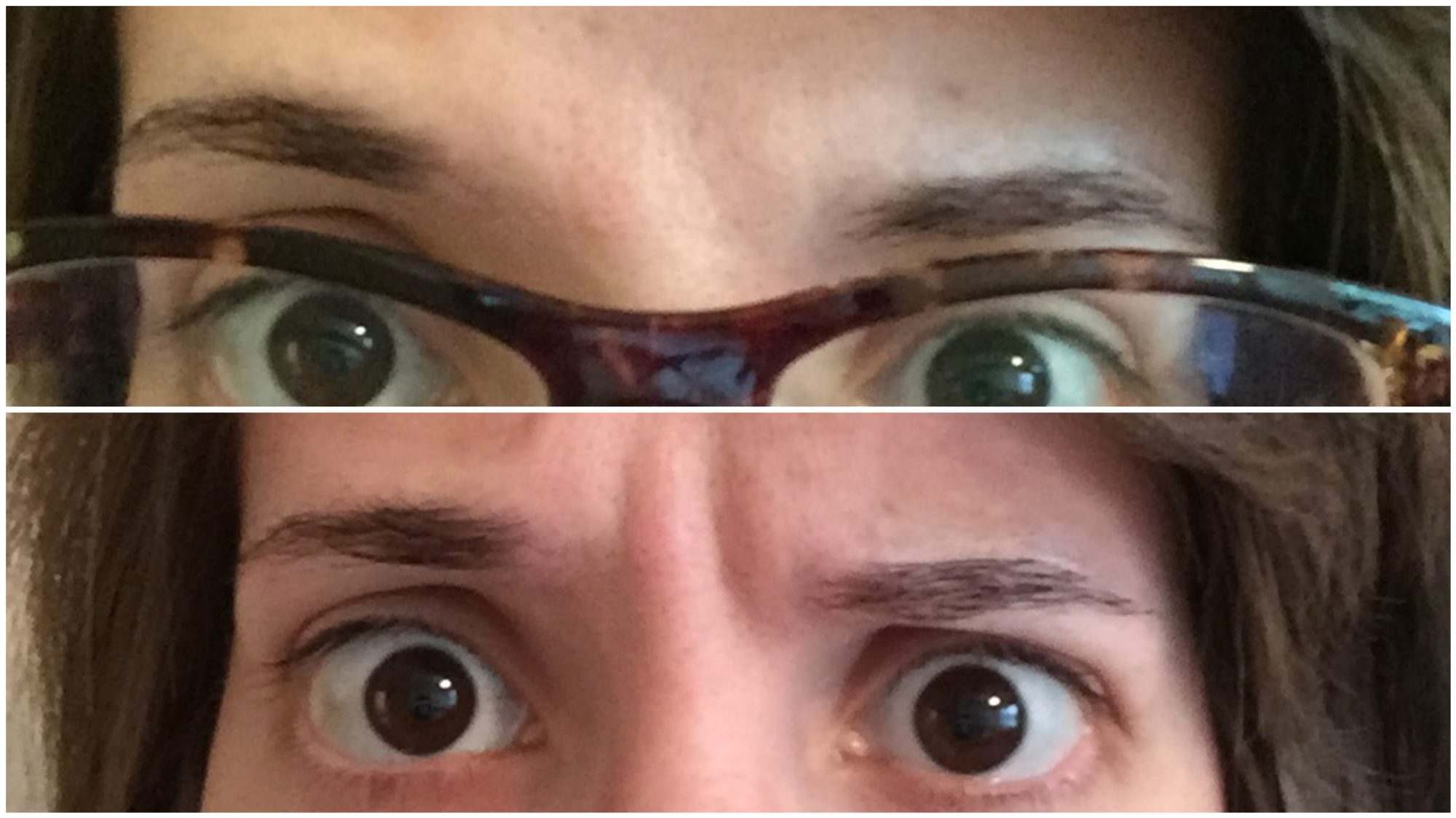 I just suck at taking care of my eyebrows. That’s the truth. I’ve gone through years of over-plucking, and then I let them grow out and it looks like a jungle. Also, they just do whatever the hell they want (just like my hair) and refuse to ever stay in “shape.” This is them in all their natural glory. You’re welcome for the makeup free selfie.

The application is easy. It’s just like painting your eyebrows with some sort of thick, colored wax. We did this once at the HG office with lip tint everyone else loved it and I was like, “…pass.”

You’re supposed to do it to the desired shape of your eyebrow, and this was my first mistake — but more on that later.

I put it on, and I looked in the mirror, and thought to myself, “Helga Pataki would be proud!” 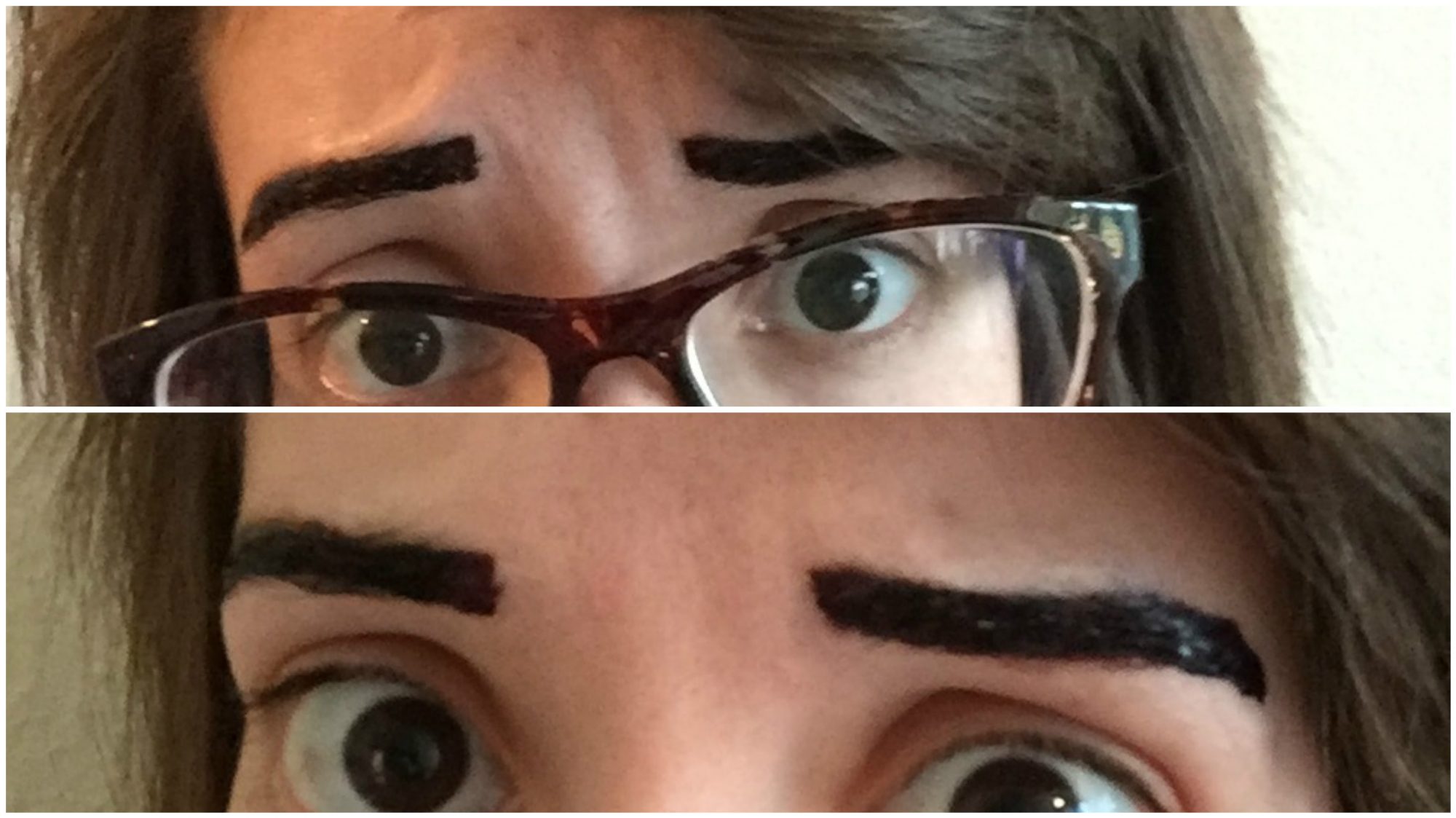 Also I used both colors at the same time — one on each eyebrow. Because YOLO.

You’re supposed to leave the product on for at least two hours. Many other reviewers mentioned that they put it on before bed, and peeled it off in the morning. That worried me. I decided to leave it on for three-ish hours. I watched The Mummy on Netflix (DON’T JUDGE).

After a while, I could feel that this had hardened, for lack of a better word, on my eyebrows. It reminded me a lot of those colored glue designs you’d make as a little kid. You know, the ones you’d do on like a piece of wax or saran paper, and then stick to the windows as if you had made stained glass. That’s basically what was on my eyebrows. 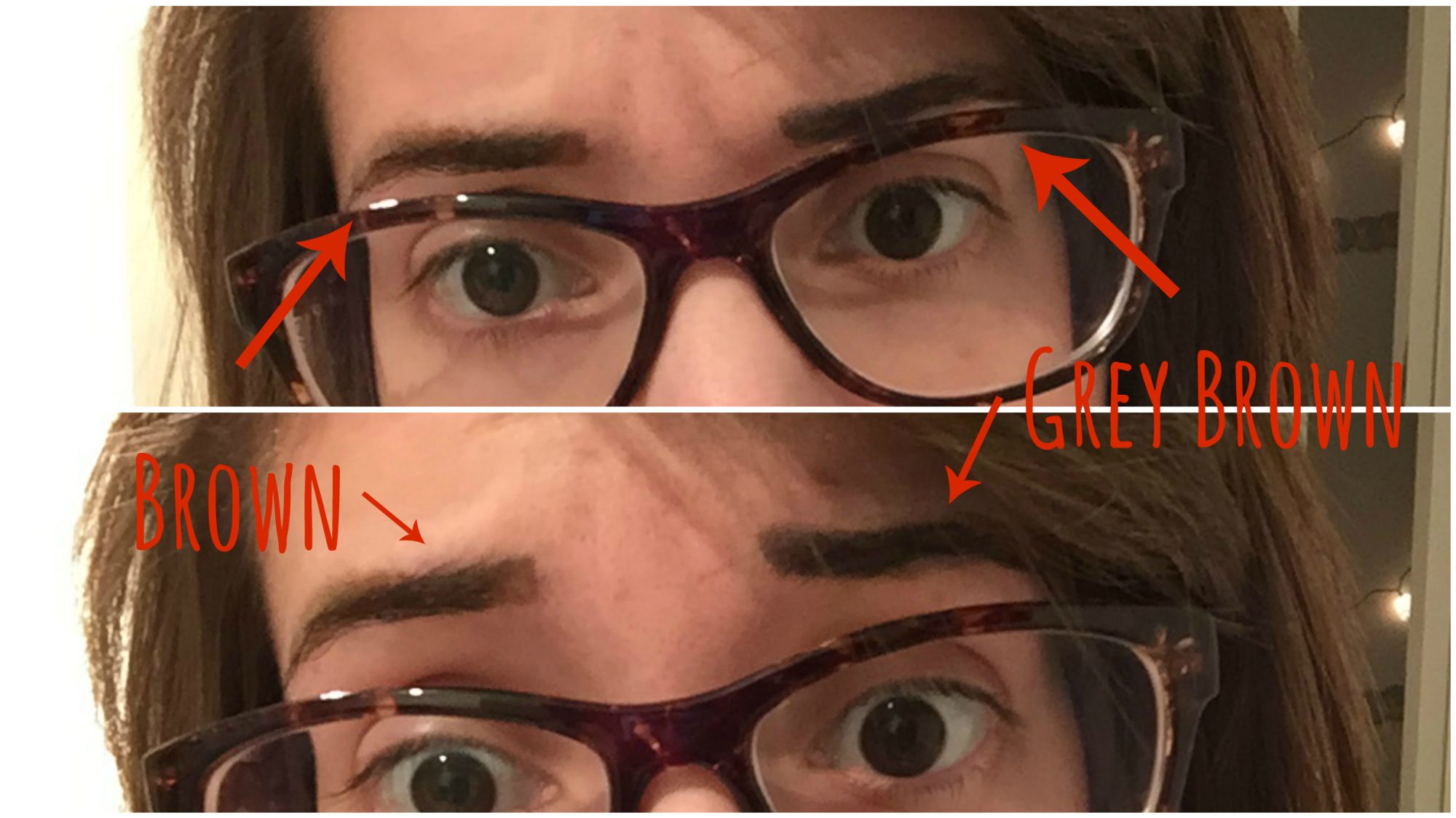 Was I honestly surprised and mildly shocked that this actually worked? Yes. Did it give the illusion of thicker, fuller eyebrows? YES. For me, oddly enough, both colors actually worked. You can can clearly tell the different between the two, but if I were to just go with one or the other, it would very much look completely natural.

BUT, and this is the only but, I flew too close to the sun trying to actually create an eyebrow ~shape~. I put this on areas WITHOUT hair, and it looked…not great. You can clearly see in the above picture where my actual eyebrow ends and the tint begins. It didn’t look awful with the brown color, but with the grey brown, it looked like I had a weird bruise above my eyebrow. I was not a fan. 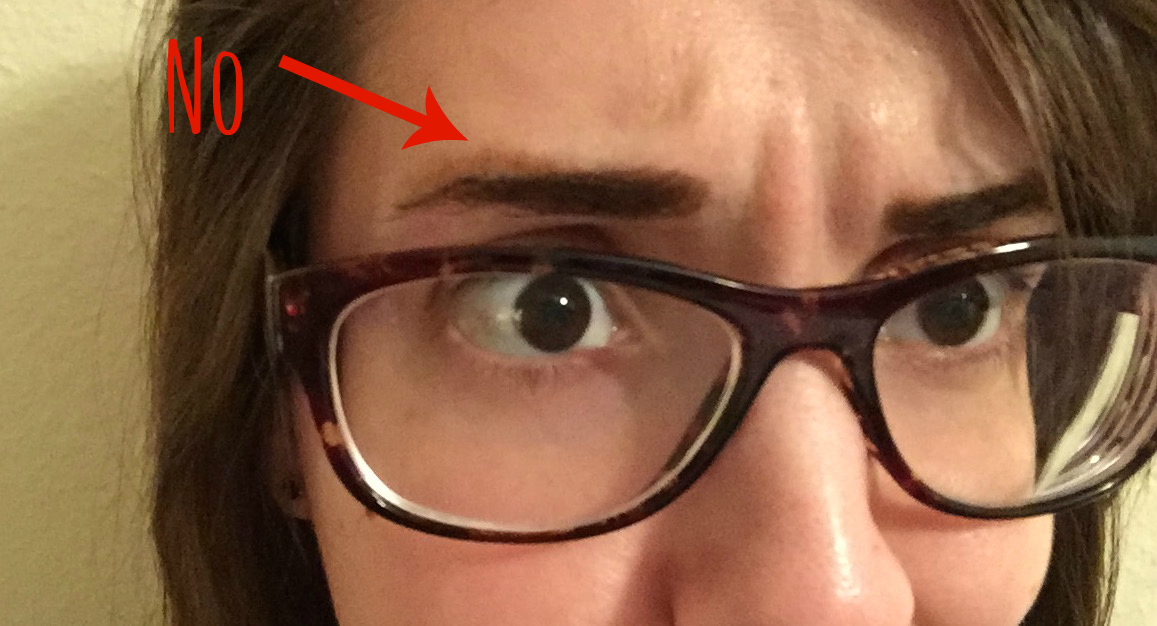 The only downside to this is that the second I went to go wash my face, all of this beautiful tint disappeared. According to the packaging, you’re supposed to let it sit, untouched by water or other makeup, for 24 hours. That’s a long time to go not washing my face. The longest I could go was 12 hours, and when I did wash my face, I tried to avoid my eyebrows as much as possible. The tint faded, but not that much. 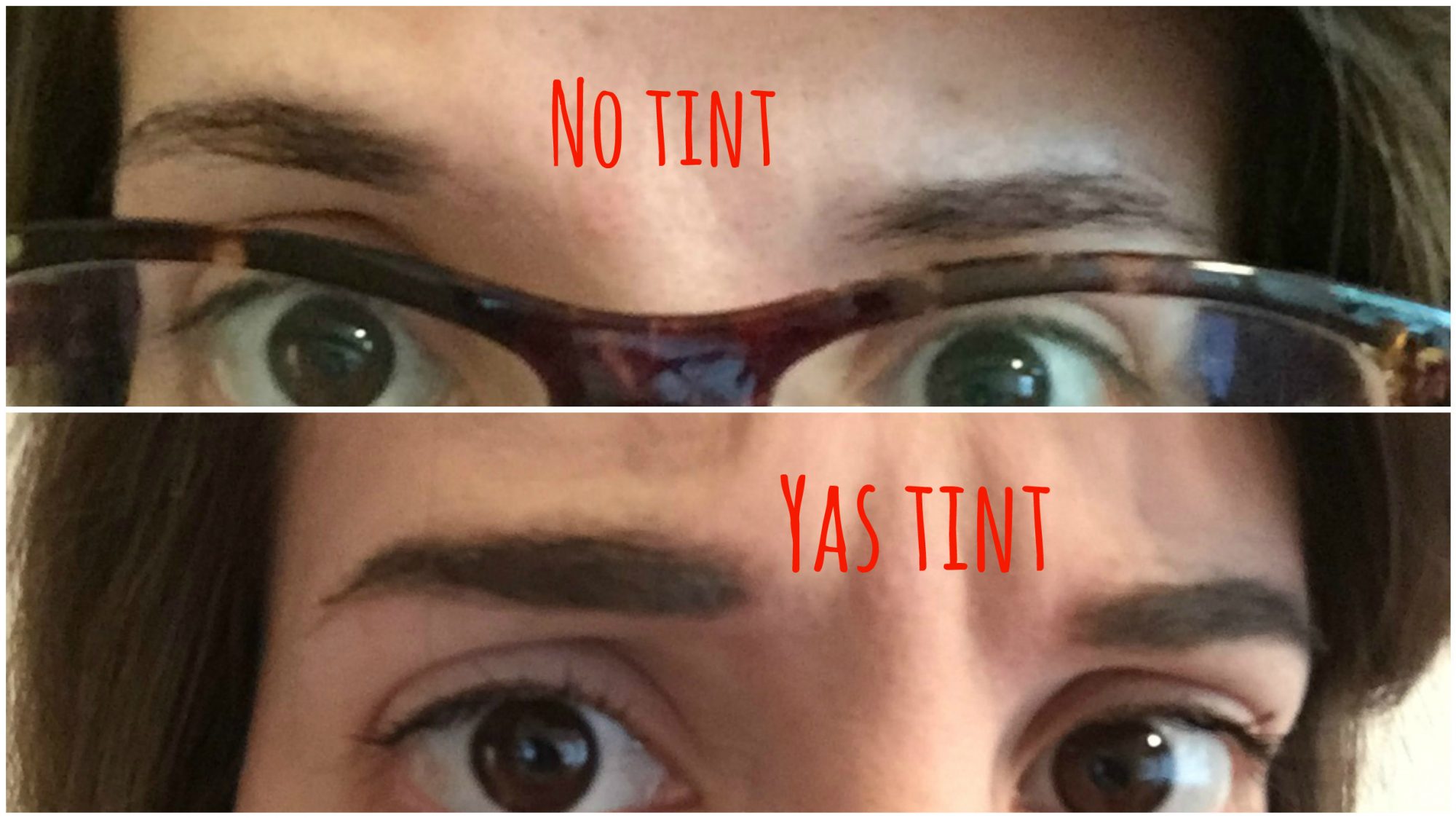 For someone who hates trying to do their eyebrows in the morning, and wishes it was 1,000,000% easier, this product was marvelous. It created such a subtle tint that I could simply go out without doing any more touchup on my eyebrows. I went to the gym and looked in the mirror there and thought, “Wait, why did I do my eyebrows before I left?” Then I was like JK LOL THAT’S JUST THE TINT!

It’s honestly too much work to keep it up all week, though. Leaving the tint on, and then not washing my face for a prolonged period of time is tough. I ended up showering, doing the brows, and then not washing my face the next morning, and that seemed to work. Best use for this might be if I knew I was going somewhere in the hot summer sun, and wanted to wear as little makeup as possible, this is a great alternative. Just do it the night before, and not have to worry about doing my eyebrows the next day, let alone any of the brow makeup running down my face in the heat.

My review: Four thumbs up ???? It lost a thumb because I couldn’t do my whole eyebrow without it looking weird, and also I want to wash my face every 12 hours. But for the ease and convenience of what it achieves, it gets a big YES.