How racism and fatphobia prevent us from getting a PCOS diagnosis

Too many of us have stories about struggling to access the care we need. Often, health care obstacles are directly tied to medicine’s gender bias, as well as stigmas relating to our race, ethnicity, sexuality, gender identity, age, size, income, and condition. In our series Pain Today, we are highlighting these stories through personal and reported essays, hoping to empower each other to advocate for our health in a way that much of the medical community does not.

Growing up as a daughter of immigrants, I’ve always understood that health care is not built to serve women of color. My own experiences looking for the right OB-GYN within my limited health insurance options illuminated how hard it is to be properly diagnosed. My late teens and early twenties were spent grinning uncomfortably through OB-GYN visits where I’d be told to simply “lose weight” so that my period would regulate itself. I wondered why my complaints weren’t being investigated seriously, and eventually I developed a healthy distrust for doctors in general.

After seeing three doctors in three different cities over the span of seven years, I found myself getting an ultrasound in a doctor’s office on the Upper West Side. I never expected needing an ultrasound unless it was to explore the idea of having children, but it turns out I needed one desperately. The ultrasound helped my doctor diagnose me with Polycystic Ovary Syndrome (PCOS), a hormone disorder that often manifests with irregular menstrual cycles and can lead to infertility. The hormone imbalance caused by PCOS affects the hormones that regulate weight gain, which puts those who have the syndrome at higher risk for Type 2 diabetes.

I wanted to scream. Each one of my doctors had perfectly functional ultrasound machines, and this diagnosis could have been made years ago if my previous doctors had believed that my symptoms were real enough to investigate further.

Fatphobia and medicine collide when a doctor recommends you simply “lose weight,” rather than exploring more tests and treatment options—like the ultrasound that would have properly diagnosed my hormone imbalance.

When doctors act on a preconceived notion that fat people are to be blamed for their own lack of discipline in maintaining an ideal weight, they inherently disregard cultural and genetic factors that might be affecting the health of fat women and gender non-conforming folks. 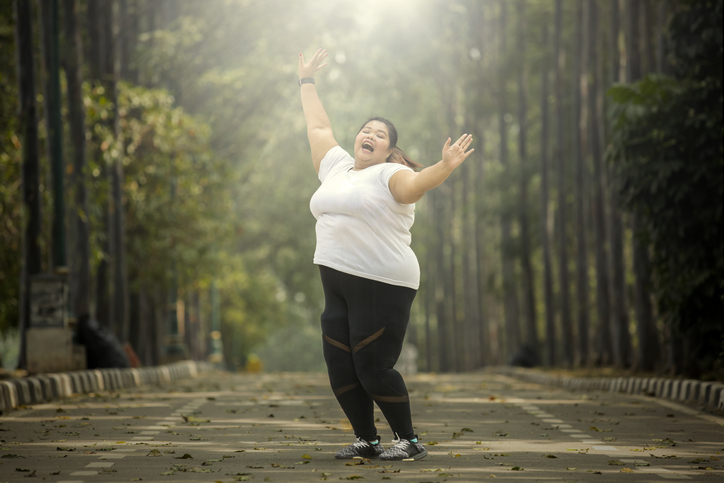 Through a community event called Bodies in Full Bloom, which aimed to discuss personal issues faced by fat women and femmes of color, I heard story after heartbreaking story of many diverse, plus-size women experiencing a combination of gender discrimination, racial bias, and fatphobia when seeking health care. One community member, Taekia B., was generous enough to share some of her story with me so I could better understand how these medical biases affect Black women.

Taekia was diagnosed with both severe amenorrhea (the absence or severe irregularity of periods) at 15 and sleep apnea at 12. Even though she was prescribed oral contraceptives to help manage her irregular periods, Taekia shared that the side effects of the pill were simply too rough for her. She would later find out that irregular periods and sleep apnea are both symptoms linked to PCOS. “All of these issues were attributed to weight, and not really much more,” Taekia recalls. “Sleep apnea? Lose weight. Crazy period? Take the pill, lose weight.” She wanted answers, but felt like her weight was getting in the way of receiving actual care that she needed.

At 27, Taekia went through long stretches of time with zero periods. Her new doctor conducted tests to detect potential hormone imbalances, and she was diagnosed with PCOS. She was relieved to finally find something that explained all of her seemingly unrelated symptoms, and welcomed treatment plans from her new medical team.

I spoke with Dr. Sophia Yen, CEO of Pandia Health, the only women-led birth control delivery company staffed by practicing doctors. Dr. Yen explained that the diagnosis and treatment of PCOS is made even more difficult by the fact that its symptoms can be treated by a wide array of specialists. PCOS lies in the intersection of gynecology, adolescent medicine, and endocrinology (a medical specialty focusing on hormone production). So theoretically, each of those doctors can diagnose and treat PCOS differently.

Dr. Yen also explained that a gynecologist or adolescent medicine doctor might opt to treat PCOS with birth control, which regulates periods enough to curb symptoms. An endocrinologist, on the other hand, might prescribe metformin, a drug developed to maintain glucose levels to prevent type 2 diabetes. “Adolescent doctors and gynecologists will usually use birth control for hormonal treatments, but it’s doing nothing for the metabolic side,” shares Dr. Yen. “Metformin addresses the metabolic side, but not the hormonal aspect, which causes acne and facial hair due to the hormone imbalance.

Studies also show that PCOS affects women of all racial backgrounds differently. Conditions that are more prevalent in marginalized communities, like cardiovascular disease and diabetes, are aggravated with PCOS. The Black Women’s Health Imperative warns readers that Black Women have lower success rates with fertility treatments such as IVF. A study published by the American Journal of Obstetrics and Gynecology shows that Hispanic women who have PCOS are at higher risk for developing hyperglycemia, the defining symptom of type 2 diabetes. Early diagnosis would have been life-changing for a Black woman planning to have a family later in life, or for a Latina woman coping with early onset diabetes in her 20s.

"On the one hand, it felt revelatory to hear something that sounded like an answer. And on the other hand, oof—it felt like so much lost time.

When I asked Taekia how it felt to receive this diagnosis after nearly two decades of trying to find the culprit behind her often-underestimated symptoms, she said it felt bittersweet. “It definitely feels like no one ever took a look at the whole picture,” Taekia laments. “It felt like something that very, very obviously manifested at puberty, and [it] could’ve been dealt with so many years ago. So, on the one hand, it felt revelatory to hear something that sounded like an answer. And on the other hand, oof—it felt like so much lost time.” The relief of finding treatment plans comes with the disappointment that she didn’t get the care she deserved from the start.

I also desperately need to point out a glaring observation about the quality of care that Taekia and I received. As a light skinned Asian American cis woman, it took me seven years to land at the correct diagnosis. As a Black, dark skinned woman, Taekia’s diagnosis took 15 years. In the eight-year difference, Taekia could have taken steps to prevent symptoms that can radically change the trajectory of her life. Racial discrimination within the health care industry is literally deadly and quality of life-changing. Doctors are responsible for applying equality and intersectionality to the treatment they provide, yet women of color—especially Black women—remain disappointed and without answers.