Here are some very practical ways to love your body, courtesy of yogi Jessamyn Stanley

Alongside videos demonstrating yoga poses and offering motivational inspo, Jessamyn Stanley’s Instagram features a lot of very sensual photos of herself in various states of undress. Given the way she proudly shows off her fat, gorgeous body to hundreds of thousands of followers on a regular basis, you might assume Stanley is the most confident person in the world. (“Sexualizing my own ass cheeks feels like a very important step in my body liberation journeys,” she writes in a caption on a shot of her backside in a striped yellow swimsuit.)

But the truth is, even this badass, stereotype-smashing yoga instructor—who helped set in motion the larger movement for body inclusivity in the yoga world—still has her own share of body insecurities. “I still struggle with the same body image issues as everyone else,” Stanley tells me. “I really think that I’m addicted to body shaming, and I’ll be in recovery for the rest of my life.”

Her words are a breath of fresh air in a world that, these days, outwardly celebrates the idea of body positivity but has failed to dismantle its sexist, unhealthy beauty standards, and offers few tangible ways to really engage in the practice of self-love (other than buying unnecessary stuff).

Learning to love your body really is a journey that almost everyone needs to go through, and for most of us—even for bold, inspiring wellness leaders like Stanley—it’s an ongoing process. This focus on body-positive wellbeing and the practice of self-love is at the heart of Stanley’s newly launched digital yoga studio, The Underbelly, which is geared toward offering “yoga for the rest of us.” The app guides people into developing a yoga practice through three courses (with delightful names: Air to learn to breathe, Earth to get grounded in basic vinyasa postures, and Fire to turn up the heat). Notably though, her program emphasizes yoga as a means of self-inquiry and self-learning, focusing on the inner emotional benefits instead of the external physical ones.

For Mental Health Awareness Month, I spoke with Stanley about the universal struggle to be at peace with our bodies and real, practical ways to engage in this process of reclaiming and appreciating them. HelloGiggles: These days, it feels like body positivity has become part of the cultural mainstream. The movement is thriving on social media, and many brands and media outlets are going out of their way to have more body diversity and representation. So why is it still so hard as individuals to love our own bodies in our day-to-day lives?

HG: Do you have any good strategies for getting yourself out of a negative self-talk spiral?

JS: When in doubt, meditate and practice yoga. I mean, but I would say that, right?

HG: In past interviews, you’ve described the nude and semi-nude photos you post on social as being part of your “body reclamation work.” What do you mean by that?

JS: In order to accept the physical body, one must observe it organically. That means naked. The fact that so many of us are afraid to even look at our own naked bodies is a huge part of why we hate our bodies. You have to start with acceptance and work from there.

HG: I’ve heard you say your new yoga studio app, The Underbelly, approaches yoga specifically through the lens of body-positive wellness—not fitness. Why was this distinction important to you when creating the platform?

JS: The fitness bullshit isn’t cutting it anymore—people want to learn about yoga from someone who looks, talks, and lives like them. The Underbelly yoga classes are completely different from other yoga resources—they’re taught by a teacher who swears like a sailor, belches like a frat boy, and who is unapologetically fat, black, and queer.

HG: What does it mean to “take care of your body”? People usually talk about exercise and eating habits. What do you think?

JS: I think the first step of “taking care of your body” is respecting your body. Exercise and eating habits mean absolutely nothing if you fundamentally do not respect your body. 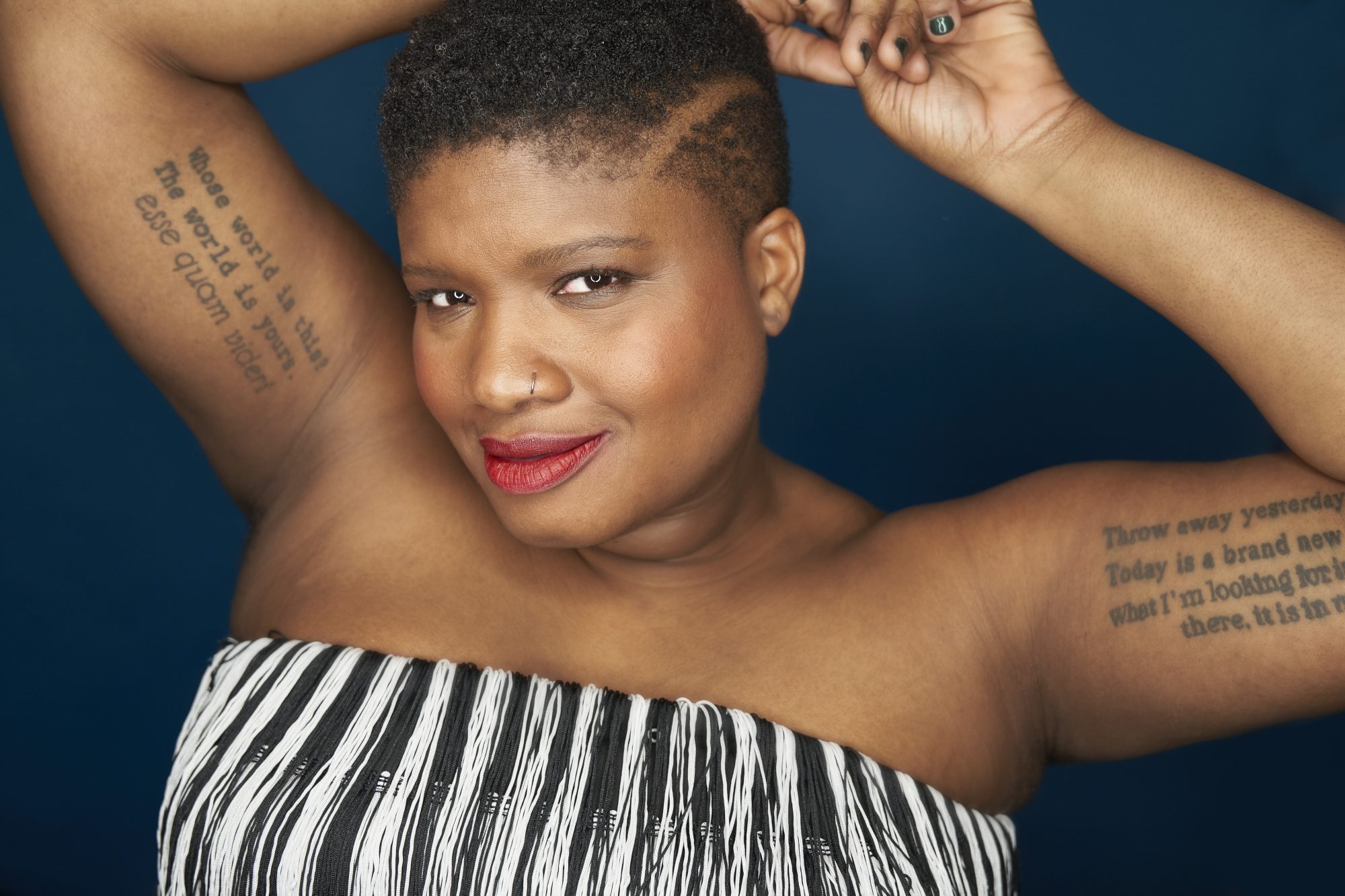 HG: Why did you decide to name your yoga studio The Underbelly?

JS: The Underbelly is named after the softest part of our emotional and spiritual bodies—the part that we fear showing to other people. The Underbelly is what yoga makes us see and accept, and I felt that it summed up so much of what I love about yoga.

HG: Are you a fan of journaling? I noticed your app encourages people to journal after taking a class. Why?

JS: I think journaling is a very helpful tool in any practice of the self. Photo and video journaling played a key role in my yoga journey, and I wanted The Underbelly to include a space in which practitioners could log and share their journeys in a safe space (aka the opposite of Instagram, which has become a somewhat brutal place to log a yoga practice.)

HG: What are some tangible ways to practice loving your body?

JS: Listening to your body is the best way to practice loving your body. Also, say nice things about it. All the time. Any chance you can.

HG: Other than yoga, what’s one go-to self-care practice you use to take care of your mental health?

JS: I turn off social media and read a book instead. It’s a game-changer.