Eating ice cream for breakfast might make you smarter, and we are definitely willing to give it a try

Let’s be honest. It can sometimes be a struggle to wake up in the morning. Whether you stayed up too late, you’re stressed about work, or you just love sleep, finding that extra morning motivation can be tough.

But a new study that says eating ice cream for breakfast might make you smarter gives us hope that there’s a chance for us to improve our struggle to crawl out of the covers.

It’s not advice we’ve ever heard before, but we’re totally willing to give it at try. Because if anything can wake us up and start our day on time, it’s the promise of ice cream for breakfast. 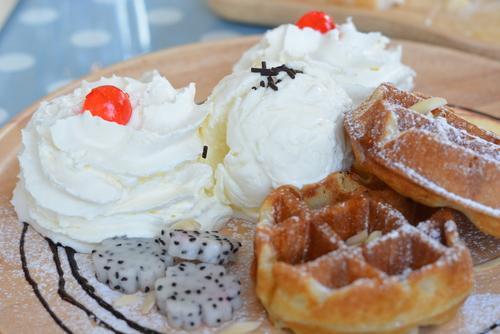 According to The Telegraph, Japanese scientist and professor at Tokyo’s Kyorin University, Yoshihiko Koga, sought to answer that age-old question of whether or not there are any benefits of early morning ice cream.

Using a series of clinical trials that had lucky test participants test out the unconventional breakfast choice right after waking and discovered what we all desperately hoped to hear. It turns out that eating the sweet treat in the morning right when you get up can improve your mental function and brain power.

He and his team had the two groups — those who ate the frozen dessert for breakfast and those who didn’t — complete mental tasks on the computer and compared the two for reaction times and their ability to process information.

And you want to guess which group did better? Yep, the people who indulged.

The scientists wanted to make sure these awesome results were because of the ice cream itself and that the subjects weren’t actually benefiting from just the cold temperature of the ice cream.

So the team repeated the experiment using cold water at the same temp as the ice cream. And, while there was still a slight display of increased mental capacity, it wasn’t nearly as high as when they ate ice cream.

Now, this study doesn’t mean we should forget about the healthy breakfast options that also help stimulate our brain. And, of course, keep in mind that lots of ice cream doesn’t automatically mean lots of brain power. But, if it’s early and you’re in need of an extra boost, you can now have a scientifically backed excuse to enjoy some dessert for breakfast.