I tried a personalized diet from Habit, and it completely changed my relationship with carbs

They say the best rewards come from facing your fears, and for me, testing out personalized diet company Habit meant confronting two phobias—needles and carbs. Yes, carbohydrates. It’s not that I don’t find carbs delicious, but like many women, I’ve been conditioned for years to believe that pasta and potatoes are the Mordor of food groups. But after undergoing Habit’s body analysis test—which involves pricking your finger repeatedly to draw blood samples—and getting my personal nutrition plan, my perspective changed.

The idea behind Habit is that since no human body is the same, nor are our dietary needs or the way we process different foods, so by undergoing testing and analysis, the system can determine an individual’s optimum intake of various food groups and devise a “prescription” eating plan of sorts to help you achieve whatever your health goals may be.

Rather than blacklisting certain food groups or pushing the latest dieting trends, Habit aims to educate users on the best food to fuel their bodies and present them with an appropriate eating plan to help achieve goals like weight loss, increased energy, and improved overall health.

Launched in 2014, the plan is based on “systems biology,” which, according to the company, means it’s a step ahead of DNA-only diets. The testing process not only looks at DNA, blood biomarkers (how your body responds to specific nutrients), and other measures to find your ideal ratio of macronutrients (carbs, fats, and proteins). It also provides recommendations on micronutrients (such as vitamins and minerals), indicates issues like lactose-intolerance, and flags potential proneness to future health issues, such as managing blood glucose.

“DNA can only tell you half the story, explained the company’s founding chief of science, Dr. Joshua Anthony. “You have to understand how those genes are being expressed, so we look at multiple lines of evidence. We combine DNA, blood work, a ‘challenge beverage,’ and body and behavioral measures to understand how everything’s coming together and get a view of your health state. We’re able to target specific parts of your body, understand how they’re functioning, and make recommendations based on that.

The company was the brainchild of Neil Grimmer, a former punk rock musician playing the Berkeley, California circuit alongside Green Day in the mid-nineties. He then became an artist before jumping into product design, but while competing in triathlons and ironman races, Grimmer became fascinated with how the right food could power him through 12 hours on a racecourse. After becoming a father, his passion for the “power of nutrition” manifested in a baby food company, Plum Organics, which was eventually sold to Campbell’s Soup. But as he focused on parenting and business, Grimmer’s own health fell to the wayside—he gained 65 pounds and found out he was pre-diabetic and at high risk for heart attacks.

He teamed up with Dr. Anthony, and the two started exploring personalized nutrition, traveling the world meeting scientific experts, and developing Habit, with Grimmer himself losing 25 pounds over six months based on the system. Drawing from more than 1,000 clinical studies, scientific publications, and experts, the program was built around challenge-based methodology. This means putting your body to the test with the “Habit Challenge Shake,” a thick beverage that consists of carbs, fats, and protein. Users take their blood via finger prick tests before and after drinking the shake, and the results are evaluated using Habit’s Nutrition Intelligence Engine (a series of algorithms that can tell you how your body processed the shake) and inputs from other measures to determine a personalized diet plan. “It’s like a real meal,” said Dr. Anthony. “It helps us understand the best amount and types of macronutrients to feed your body, as well as the right amounts of micronutrients.”

The taste varies from “delicious” to “disgusting” depending on who you ask, but for many users, downing the dense meal replacement drink within five minutes is the hardest part of the at-home test, with one customer describing it as, “so sweet it hurt my teeth.” However, for me the greatest hurdle was taking my own blood—though it required just a simple finger prick—not once, but three times throughout the morning. Just thinking about it sent a wave of dread sweeping through me as the alarm sounded in the morning, and watching Habit’s video guide (as helpful as its tips later proved) only grossed me out more. Luckily, after opening the test kit, which looks more like a gift box, the process felt less intimidating. “It’s just a box,” I assured myself. “How bad can it be?” And although attempting to squeeze enough drops out of each prick proved a challenge, I proudly bled my way to better health.

My results arrived three weeks later, with the recommendation that my diet should be 50% carbs, 30% fats, and 20% protein. Being told that half of my diet should consist of carbs was unnerving, shocking, puzzling, and like winning the food lottery all at the same time. Carbs do not equal Mordor? I was intrigued. I was also found to have variations of genes that can hinder the body’s management of blood sugar—a nudge to think about how my diet can help me maintain healthy blood glucose levels in the long term, given that diabetes runs in my family.

I entered a goal weight loss of eight pounds into my personalized portal and was presented with a breakdown of how many servings of starches, vegetables, fruits, fats, and protein I should eat, with examples of each. Having grown up in New Zealand with a “5+ a day” fruit and vegetable recommendation hammered into our heads as kids, the notion of tripling that to nine cups of non-starchy vegetables, five servings of starch, and four servings of fruit was overwhelming as I realized the total daily food plan was at least double what I normally eat. “Eat more on a diet? Sure!” I thought, doubtful any good could come from it.

For three weeks I followed the plan, cooking up large batches of vegetables every few days and resisting the temptation to count a glass of wine as a serving of grapes. On most days, I would wake up and eat bananas, strawberries, or grapes before working out, then have a late breakfast/lunch of scrambled eggs and smoked salmon on whole grain toast, adding avocado, cheese, or ground flaxseed to reach my recommended nine daily servings of fat. 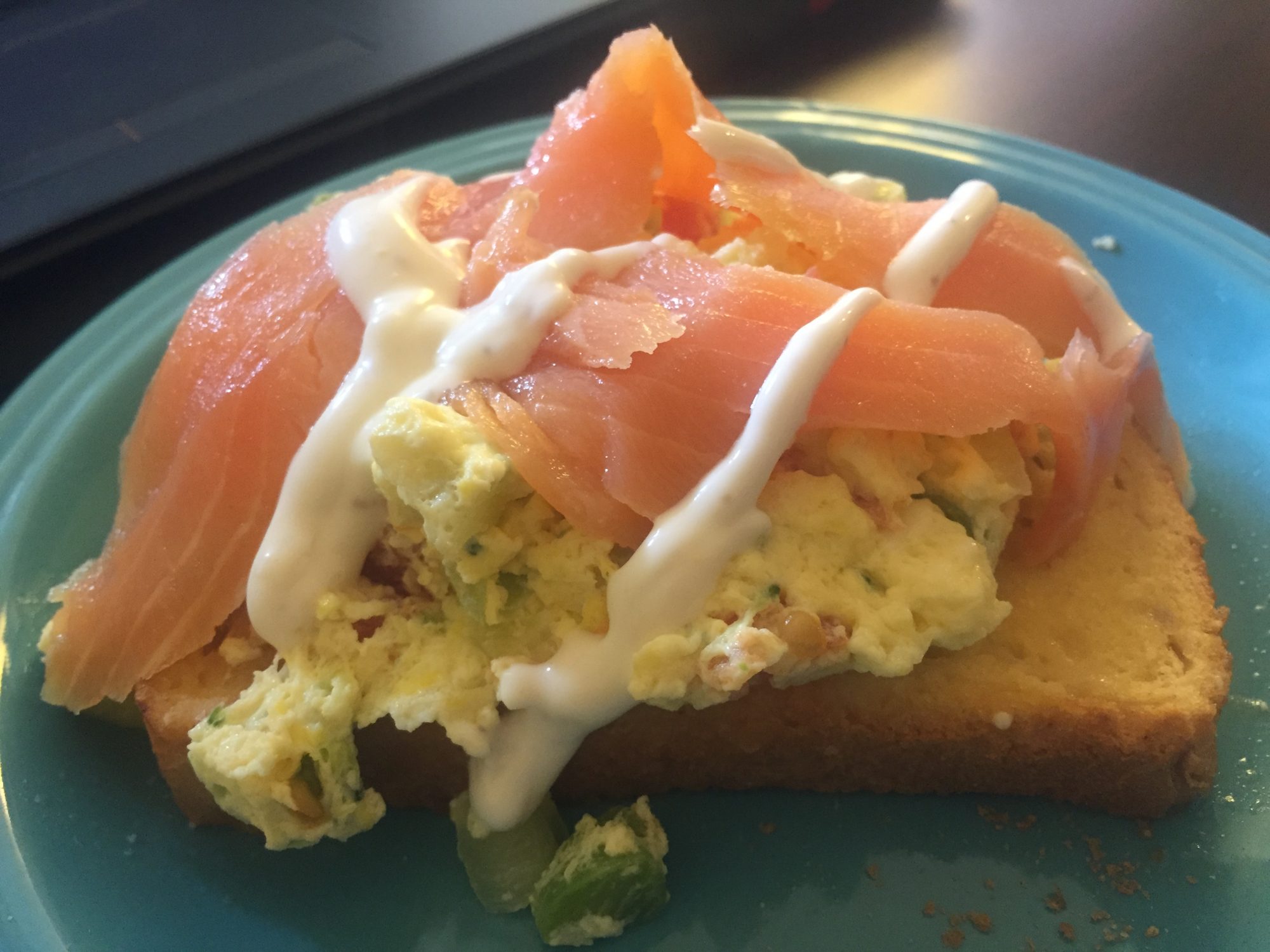 In the afternoon, I snacked on dried chickpeas, carrots, and mixed nuts. For dinner, I alternated lamb and salmon (which were listed as my best protein sources) or had chicken sausages or tinned tuna on the nights I didn’t have time to cook. This was accompanied by roasted baby carrots, broccoli, zucchini, red peppers, sweet potato, and spinach along with tinned peas, sweet corn, and green beans. To fill my starch recommendations, I added farro, quinoa, or butternut squash into the mix.

At first, dinner was my biggest meal, as I scrambled to fill my quota of vegetables and starches, but I gradually got better at adding these foods into my daytime meals and snacks, such as mixing tomatoes or broccoli into my eggs. 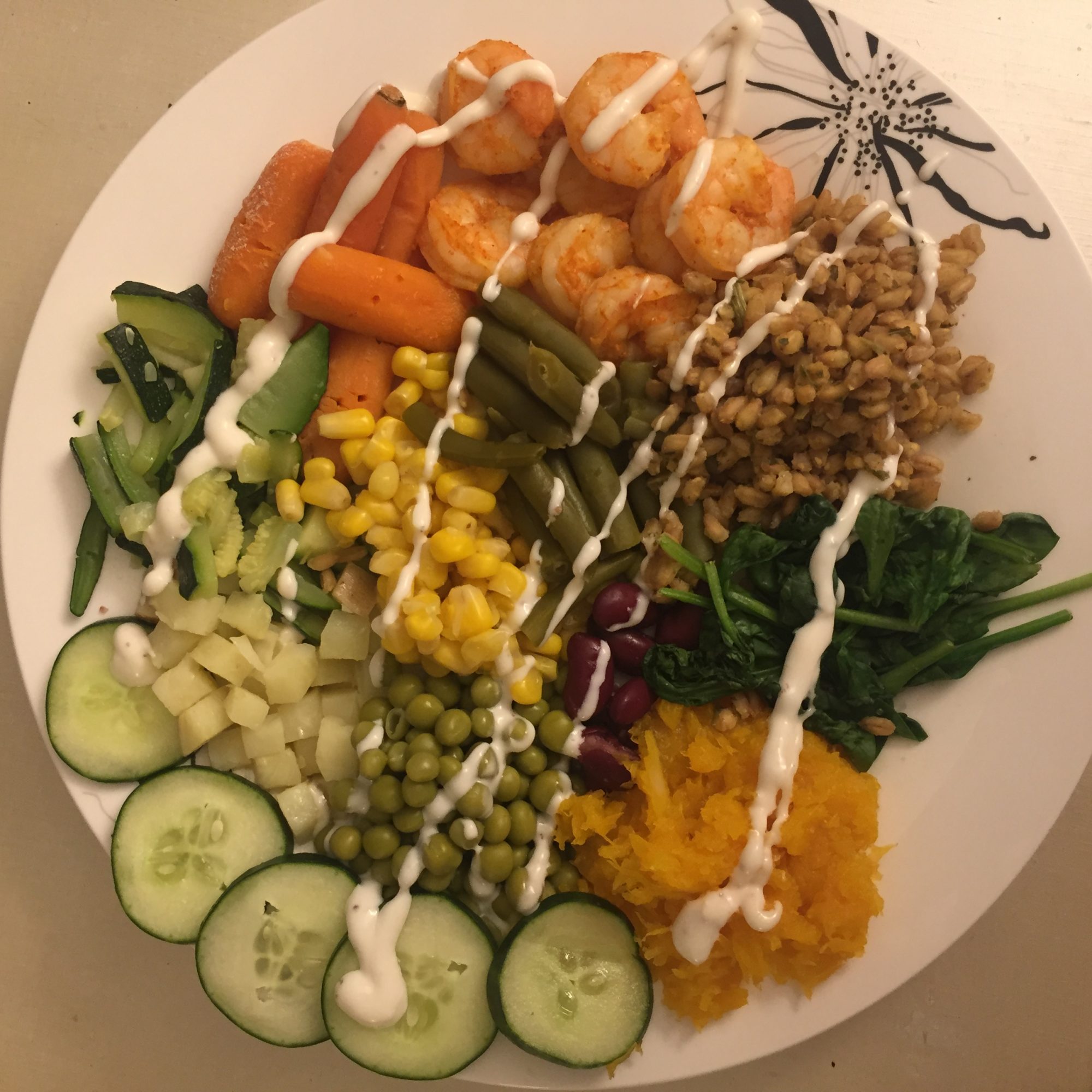 Optional recipes would arrive in my inbox weekly, as well tips on how to stay on track on weekends. And while grocery store trips inconveniently multiplied, Habit has an Amazon Fresh partnership that lets users get each recipe’s ingredients delivered. The dramatic increase in carbs felt like it went straight to my belly, and I was convinced I had put on substantial weight, but I was surprised to find I’d lost almost two pounds after three weeks. After week one, I was also sleeping better, and within two I felt slightly more pumped during my daily workouts. I also discovered new foods like farro, and even found myself resisting my usual urge to drown my food in sauce, using healthier options like Greek yogurt—which is saying a lot for someone who takes sauce packets on long-distance flights and has a compartment full of various sachets in the fridge.

While I’m only three weeks into the plan, executive coach Michelle Hillier, 38, started using the program nearly 18 months ago to see if she could increase energy levels and feel better in her clothes. Previously on a low-carb, low-fat, high-protein diet, she too was flabbergasted to find out that she had finally been gifted a “free license to eat carbs.” Subscribing to Habit’s meal plan and recipes, she also became mindful of the specific types of foods she was eating, not just the category they fell into. “I learned it’s not about fats being bad or carbs being bad—it’s about going for quinoa instead of pasta, or sweet potatoes instead of potatoes,” Hillier said. She immediately felt her energy levels increase, started sleeping better, and lost 10 pounds within five months even though weight loss was never her goal.

Meanwhile, Kristen Seal, a 28-year–old food scientist at a health and wellness company, decided to try Habit to find out if she was eating the best proportions of macronutrients. She, too, found she had been avoiding carbs like the plague for all the wrong reasons. “I was forcing myself to consume more and more protein thinking this was the key to better health, but it turns out I need far less than I thought I did,” she said. “My body actually processes carbohydrates really well! I also rarely ate legumes, but found through Habit that certain legumes are great sources of carbs, fiber, and protein.” Seal said the plan she followed was to maintain, rather than drop, her body weight, yet she has still lost a few pounds since starting in November. She also sleeps better, feels less hunger throughout the day, and no longer feels carb guilt.

Registered dietitian and director of nutrition at Cal-a-Vie Health Spa May Tom believes personalized nutrition is vital given that bodies process food differently, and says that DNA-based diets are a huge improvement from blood type and body type diets of the past. “It’s a much more science-based way of personalizing a diet,” she said. “I don’t think we have all the answers yet, but this is the best guess—and better than following the diet that your neighbor or friend is doing.”

“Habit is probably on the forefront as they’re the only company I know of that’s doing a glucose-tolerance test, which is huge, and they’re using other metrics besides DNA,” Tom added.

However, Tom notes that it’s important to remember that the recommendations are only a “starting point” and users should verify the effectiveness of any changes themselves.

“Make sure you keep checking in with your body instead of taking their word for it," he said. "If you make drastic changes and don’t feel better, listen to your body. [The recommendations] need to be validated by experimenting and fine-tuning.

Grimmer hopes that by honing in on a scientifically determined, personalized diet plan, people can set aside the “noise” of diet trends to focus solely on what’s right for them. “Seventy-five percent of people on Habit are women and by the time they come to us they’ve tried a number of different things that have showed up in their Facebook feed, like paleo, with varying degrees of success,” said Grimmer. “We try to quiet down the noise that’s out on the market and say, ‘Let’s focus on you and what’s going on inside of your body and go from there.”