Grace Helbig on the balance of pretty and messy

Two minutes before I call Grace Helbig to talk about her new book, Grace & Style: The Art of Pretending You Have It (out today), I notice that my very professional outfit is covered in deodorant stains that look like gross, chalky tiger stripes.

It’s actually kind of fitting: Grace’s M.O. is to remind young women not to take the idea of perfection too seriously, especially when it comes to appearances. Grace & Style, her second “guide” book, is part parody, part commiseration over the fact that, as human beings, we all are expected to wear clothes and occasionally bathe. Grace gives her readers a lot of credit for making even the smallest effort. “Style,” the back cover of the colorful, photo-filled paperback says, “is just a simple way of saying, ‘I showered.’”

When I tell her about my deodorant discovery, the YouTuber doesn’t skip a beat before putting her wry yet positive spin on the situation: “Those are the best kind of stains because you’re doing something good by putting deodorant on in the first place,” she says. “It’s not like it’s red wine all over your body at 8 a.m.” That certainly put things in perspective.

Grace has been making YouTube videos for more than seven years, picking up almost 3 million subscribers along the way. She describes her predominantly millennial female audience as, “extremely smart, extremely kind, extremely passionate, very creative, funny, great human beings,” and she notes multiple times during our talk that her younger self would have benefited from an online community like the one in the comment sections of her videos.

Though Grace & Style is full of jokes, the comedic beauty book seems to be an homage to that younger self. In a surprisingly emotional introduction, Grace shares that she developed an eating disorder her senior year of high school and an obsession with “perfection” that loomed over her for years. When she eventually stopped comparing herself to celebrities in fashion magazines and began to read about other women who’d struggled with similar insecurities, Grace realized that, “beauty is completely comical. It’s goddamn ridiculous.” Perfection shouldn’t be the goal; comfort should be the goal.

This introduction lends an emotional depth to the entire book, even the section called “Street Style” that lists the fashionable attributes of avenues, boulevards, and cul de sacs.

Feeling much better about the powdery white splotches on my shirt, Grace and I talk more about her book and her fashion philosophies. Here’s what Grace had to say: 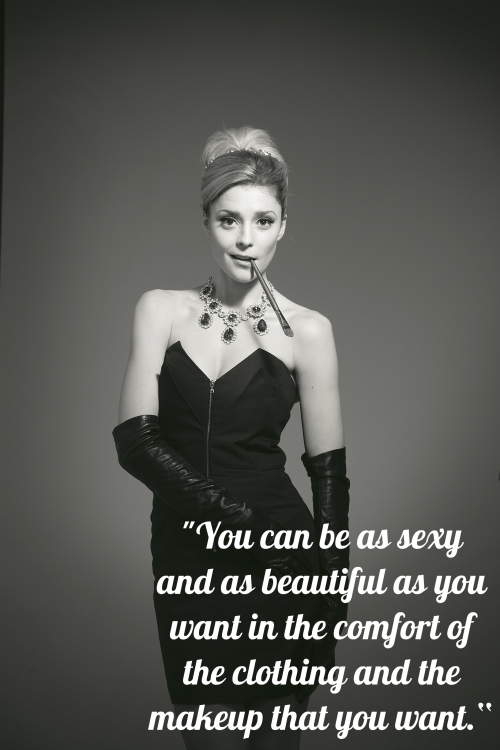 HelloGiggles: What made you decide to write a book like Grace & Style?

Grace Helbig: I have been obsessed with beauty and beauty gurus on YouTube and the whole “industry of pretty.” Part of my huge fascination with [beauty gurus] is that they seem so different from me. They seem so put together, so prim and proper, so Type A-organized, and there’s no kind of balance of mess with the pretty that gets showcased. And so, the idea for writing some sort of beauty and style book from my point of view felt really fun and sort of necessary in a way.

I read a lot of other style books, like Lauren Conrad and Michele Phan’s and Alexa Chung’s, I noticed certain trends in the information that they were presenting, and I thought it would be more fun to present the opposite side of that. So instead of, “What to wear to work,” it’s “What not to wear to work.”

HG: My favorite part of the book was hands down the introduction. You totally blew me away. Why did you decide to share the story of your eating disorder?

GH: I felt like I couldn’t write comedically about beauty and the world of pretty until I gave my perspective on it. That way, people had some context for the overall book, rather than being like, “Who is this girl that’s just, like, shitting on people trying to look attractive?” Which I didn’t want to be the case at all.

The thing is, I really love that whole industry and it’s really fun. I think it can be really playful and, at the same time, really stupid and dumb. And with that, I think there’s a fun balance to be found in being able to celebrate it and then also being able to make fun of it. It was important for me to kind of give a more serious, personal story up top, just to make sure that everyone’s aware that I’ve had my own issues with this whole genre and the last thing I want this book to be is preachy or mean-spirited in any way.

HG: After going through such a personal journey with self-confidence, how do you define style now?

GH: Style to me is truly an art form. It’s a way to express yourself. It’s like when someone sits down at a piano and plays music and different styles of music come out – it’s the same way when you wrap yourself in fabrics and paint your face with makeup. You are a canvas, and how you are most comfortable and confident is the greatest art piece that you can create.

HG: Do you have any advice for young girls who are online and feeling insecure because of the images of “beauty” and “perfection” they are seeing?

GH: I would tell those young girls, think how sad you would be to add just one Instagram filter to your photo. Multiply that by, like, seventy, eighty, ninety and that’s now the photo that you’re seeing on your Tumblr tags. Those aren’t real. There’s a lot of smoke and mirrors that are happening. Trust me, we all know our angles, we all know the correct lighting we should be in to take selfies. And that’s why – I vlog a lot and I use Snapchat a lot – and I try to be as candid and open as I can about, “This is what I look like when I wake up. This is what I look like walking around on a normal day,” just so that there is some sort of balance between, “Hey I did my hair and makeup for this video I’m shooting,” but then, “Hey this is what I look like without that.”

One of the things in the beauty industry that really gets pushed directly and indirectly is this idea of sexuality. And one of the most important things that I want young girls to realize is that – I wish someone had just said this out loud to me when I was fifteen years old – that you don’t have to be sexy if you don’t want to. And I think it’s really important to know as a girl that you have that option. You can be as sexy and as beautiful as you want in the comfort of the clothing and the makeup that you want.

HG: I’m in my twenties, and I need to hear that.

GH: It’s one of those things that no one says and I wish they would! Because it’s so important and I’ve learned that by doing all these hosting gigs where they give me clothes that are too small or things that I’m not comfortable in. You do it because you think you’re supposed to, but imagine if you didn’t and that was okay. And if you choose to be sexy, that’s fantastic. But as long as you know that you don’t have to if you don’t want to.

HG: I love the idea of someday red carpets just being everyone wearing their sweatpants and Uggs.

GH: Sweatpants! That’s all I wish, I wish so much. And trust me, I love getting dressed up. I love putting on fancy clothes if I’m in the right mindset for it. But that’s my utopia: a red carpet full of sweatpants and Uggs.

This interview has been condensed. Grace & Style: The Art of Pretending You Have It is now available from Simon & Schuster.

(Images via Robin Roemer and Giphy)