And of course, Jones had a few fun surprises occur during her viewing. Because Meyers makes magic happen.

The footage was shown during last night’s Late Night, and we’re truly hoping that they decide to air even more of these before the show wraps.

The very first “Game of Jones” segment took place in 2016, and was equally wonderful. Back then, Saturday Night Live pal Kenan Thompson stopped by to join in on the fun. false

But let’s go back to the most recent “episode.” We learned that Queen Leslie would want her castle to be located in Compton, and got to hear her true feelings on Littlefinger, played by Aidan Gillen.

"I do believe that I said that I still would do it with Littlefinger, but I would just have to watch him the whole time," Jones commented. "I couldn't have my eyes closed in passion. They'd have to be open the whole time."

The two also coined the phrase “Bran-face,” which we might need to add to our vocabulary.

Jones reiterated the fact that she’s a big Arya fan, and (spoiler alert if you still want to watch the episode for yourself) feels as if the Stark family reunion should have been a bit more celebratory. Would it hurt to throw some burgers on the grill?

But the best moment ever happened when Varys came out to join the party. 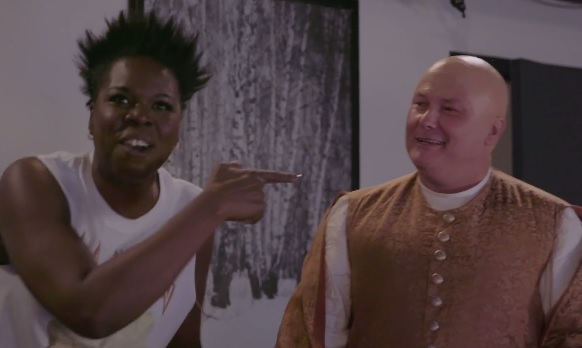 And we think that Jones would probably agree. That hug and excitement was real. And their interaction? Absolutely hysterical.

We didn’t know that Game of Thrones could get any better, but Jones definitely proved us wrong.