Without the parades, Pride looks different this year—but that just means that LGBTQ people across the country are finding new and innovative ways to celebrate and honor their identities. Pride Inside & Out is dedicated to amplifying these stories, from the queer couples taking care of each other through a pandemic to the folks using quarantine to come out to those they love.

When Henrietta Hudson opened in New York City in 1991, it was primarily a place for lesbians to drink, dance, and find partners. Or, as owner Lisa Cannistraci puts it: “It was a meat market.” But in a world where LGBTQ people have historically had to fight for safety and visibility, lesbian bars have always served a greater purpose. As Cannistraci tells HelloGiggles, “We need a place to talk about ideas and thoughts. We need a place to assemble.”

That’s why many LGBTQ people panicked after a recent NBC News article asked if the last 16 lesbian bars still operating in the United States could survive the coronavirus (COVID-19) pandemic. With their doors closed, bar owners now wonder if they’ve already served their last call, while queer patrons fear losing their safe spaces during an already uncertain time.

Some owners say they plan to re-open no matter what; after all, this isn’t the first wave of lesbian bar closures. At their height in the 1980s, there were an estimated 200 lesbian bars in the U.S., according to a 2019 study published last year by Greggor Mattson, an associate professor of sociology at Oberlin College. Between 2007 and 2019, though, an estimated 37 percent of all LGBTQ bars shuttered. And despite women and people of color being more likely to identify as LGBTQ, bars for women and queer people of color fared even worse, closing at rates of 52 percent and 60 percent, respectively.

Currently, New York City has the country’s highest concentration of lesbian bars, featuring Henrietta Hudson and Cubbyhole in Manhattan and Ginger’s Bar in Brooklyn. According to Gwen Shockey, creator of the Addresses Project, which documents lesbian and queer spaces like bars and bookstores, the city has witnessed 200 lesbian spaces opening and closing over the past century. Experts and bar owners cite factors like income inequality, gentrification, and the U-Haul stereotype (which says that lesbian couples tend to get serious and move in together quickly) for why these spaces close at a greater rate than bars catering to straight crowds.

“Lesbians, when they get romantically involved, tend to go out less,” says Lisa Menichino, owner of Cubbyhole. “They just sort of take it for granted that these places are always going to be there.”

And when they do go out, it’s not always to lesbian bars. Cannistraci, who served as the vice president of Marriage Equality USA and fought for the Supreme Court to strike down DOMA in 2013, says post-DOMA acceptance helped lesbians assimilate into mainstream society. As a result, they drank at non-lesbian bars in their respective neighborhoods with less fear. Yet once Trump was elected in 2016, “everyone ran back to the queer spaces,” notes Cannistraci. “Nobody wanted to drink in a sports bar in Astoria anymore.” As a result, she says, her bar’s last two years have been its busiest yet. 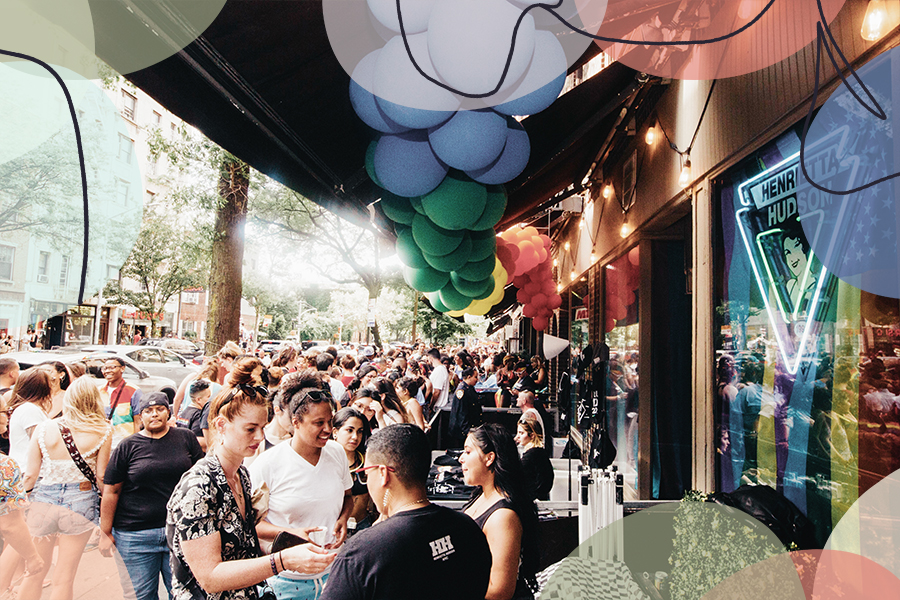 Now, however, the pandemic has forced bars to shutter their doors. But some queer bar owners predict that, after months in the house and out on the street protesting, crowds will once again return in larger numbers, seeking safety and politically like-minded community. “It is going to be so crucial that we have these spaces, because everything is crazy and dangerous,” Cannistraci says. “There’s no other way to say it.”

That’s why it’s crushing to imagine these bars being forced to shut down for good. It’s a real possibility, though. Henrietta Hudson needs $20,000 a month to pay its rent and bills; so far, it’s raised $30,000 on GoFundMe, and the team has hosted fundraisers and DJ nights on Zoom multiple times a week. When the bar does, hopefully, reopen eventually, Cannistraci says it will switch to a salon experience because of social distancing, with a DJ, servers, and four small group seating areas for set periods of time. ‘You can’t social distance around a dance floor or around [our] pool table,” she says.

Recently, Mayor Bill de Blasio released a plan for an “Open Restaurants” program that would allow businesses to use open streets and parking spots for outdoor service, potentially starting in early July. But Menichino says that unless the bars are allowed to have at least 40 percent capacity inside as well, opening would actually cause them to lose money. She’s instead considering opening Cubbyhole for takeout for a few hours a week. “There seems to be a lot of interest and urging from customers for this,” she says. “I’m sifting through the 13 pages of guidelines and rules the city put out to see if I can make it happen.”

When Cubbyhole started a GoFundMe in April, Menichino set the goal for $30,000—half going toward the bar’s nine staff members and half going toward keeping the bar open for a month. The goal was reached in 24 hours, and the page has since raised over $60,000. Over the past week though, several lesbian bars, including Henrietta Hudson and Cubbyhole, have expanded their fundraising tactics to include ways to support and amplify the Black Lives Matter movement. “I want to help even though I’m in a difficult place myself,” Menichino explains.

After all, Pride was started by Black trans and queer people, and the communities’ struggles have always interlinked. After Slammer’s, a lesbian bar in Columbus, Ohio, was looted during protests, the owners started a GoFundMe to repair damages but reminded people that “our windows and possessions can be replaced, while the lives of our slain brothers and sisters most certainly cannot.”

Just as bars like Slammer’s are continuing to provide for their communities despite many challenges, patrons are stepping up to give back. Queer groups have thrown digitial events, launched donation campaigns, and created merch to save their hometown bars. Rachel Zuckerman, a media worker, and her friend Acks, a creative in New York, designed merchandise to raise money for New York lesbian bars after reading the NBC News piece. “I felt like there must be something we could do to at least try to support these safe spaces and raise awareness about the shrinking number,” Zuckerman tells HelloGiggles.

The #SaveOurSpaces shirts feature illustrations of Ginger’s Bar, Cubbyhole, and Henrietta Hudson, and purchases have raised thousands of dollars for the three bars so far.

“I know we aren’t the only ones who feel like these spots are our homes,” Zuckerman says. “When I first came out and walked into Cubbyhole, I felt like I was finally stepping into the world I belonged in. I didn’t have to pretend to be anyone other than myself.”

“These bars impact visibility as well for our entire community,” she adds. “They are concrete assertions of our existence, and when they close, we lose that.”

Zuckerman and Acks plan to reach out to other lesbian bars across the country to help them launch similar campaigns. Because when a lesbian bar closes, Acks says, “they aren’t just shuttering the doors to a bar but shuttering them on a safe space for members of the community.

Below, we’ve collected links to the GoFundMe pages or merch sites for lesbian bars across the country. We’ve listed the bars’ Instagrams for amplification, since not all donation and merch links are readily available. Show your support for the queer community. Help save a space.

A League of Her Own: https://www.gofundme.com/f/pitchersaloho-relief