7 times Leonardo DiCaprio has cried because the Oscars are today

Tonight, we’ll watch with bated breath yet again as Leonardo DiCaprio hopes to bring home his first Oscar. Our fingers are crossed, our lucky charms are in hand and the stars are aligned. We just want to see him win! As everyone—including Kate Winslet—has been saying, this just feels like his year.

Because Leo is the best. He won our hearts on Growing Pains in the early ’90s and hasn’t stopped since. He’s a fantastic dramatic actor who brings incredibly memorable characters like Jack Dawson, Howard Hughes and Frank Wheeler to life. And one of his greatest acting talents is crying on camera. Don’t get us wrong—we never want to see Leo cry IRL, but when he has to onscreen, he still manages to look pretty good.

Let’s get all of the crying out of the way now so we can celebrate this man tonight, shall we? In honor of the happy tears we’ll hopefully be shedding later, here are seven times Leo has broken down and wept before us.

1. When he played the troubled Arnie Grape in What’s Eating Gilbert Grape. 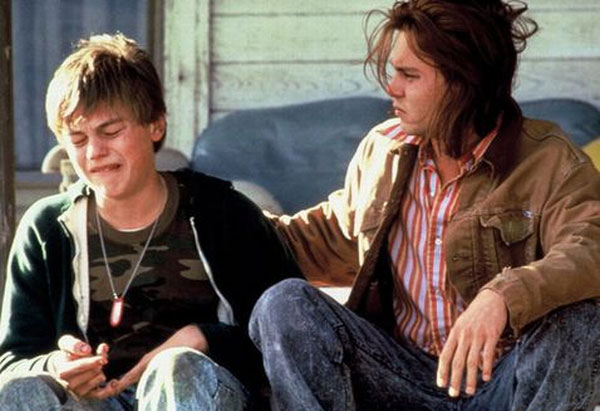 Leo cried a lot out of the gate in his acting career as Arnie Grape, a complex character who had a hard time controlling his emotions. This is the crying face that started it all—the face that earned Leo his first Oscar nom.

3. When he broke down in Revolutionary Road.

4. That other time he broke down in This Boy’s Life.

Leo really made a name for himself early on playing troubled characters. This time he did it alongside Robert De Niro.

Shutter Island is freaking intense. And twisted. This is the face of a man whose entire world has just been turned upside down (and kind of the same face that you, the viewer, make when you realize what’s really going on).

6. When things got to be too much in The Departed.

Another intense movie, a less intense (but still emotional) cry.

7. His sobs in The Basketball Diaries.

Let’s end this on classic Leo. His crying in The Basketball Diaries was a deeper, weepier kind of cry. Everything is okay in the end, but damn if Leo doesn’t struggle along the way.

Leo, if you ever need a shoulder to cry on, you can always give us a call.