Lena Dunham got her eyebrows microbladed, and we’re kinda obsessed

We are definitely living in the era of the eyebrow. We doubt we could go more than a few days without hearing someone either gushing over someone else’s brows or lamenting their own sparse ones. So, it’s no surprise that people are turning to more drastic measures — e.g. eyebrow tattooing AKA microblading — to get more fierce brows, and at least one celebrity is giving the treatment her stamp of approval. The notoriously honest writer and actress Lena Dunham has recently discovered microblading and is opening up about how much she loves it. 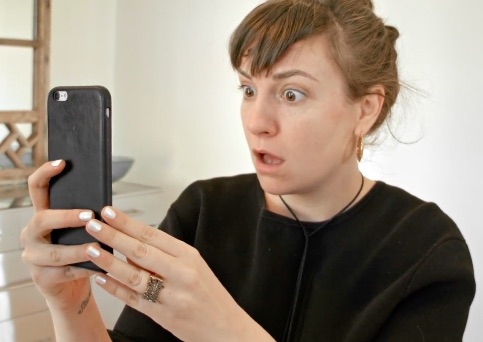 Dunham explains in an essay and video for Vogue.com that, when she was younger, she didn’t quite know what to do with her brows.

“Mine were thin and pale, roughly the color of roadkill, with random hairs sprouting where they might, creating the effect of a sparse forehead rug. But I had a totally untested plan: I’d create a super thin shape using my dad’s dull tweezers, then use a pencil of some sort (lip or eyeliner; who really knew the difference?) to fill in what God had not gifted me,” Lena writes in her Vogue.com essay.

Oh no. We know how this ends. Years of over-plucking and eyebrows that won’t grow back. Sigh. Many of us have done the same as well.

She began to fill in her brows with various products, but never felt fully confident. Then, a co-worker suggested microblading. She initially said, “hell to the eff no,” because the idea of permanent make-up scared the bejeezus out of her.

“One time somebody told me that my eyebrows were not on fleek,” Lena said. “And I thought about it for like six days.” Lol, same. She decided to try out the treatment to get brows like some of her eyebrow idols — namely Lily Collins and her sister, Grace. Lena enlisted the expertise of celebrity permanent makeup artist, Dominique Bossavy, and never looked back.

Here are some shots from Dominique’s Insta:

In the video, Bossavy explains, it takes three sessions to get the most natural result. Lena also says it’s not very painful and feels like scratching a sunburn.

Check out the video here:

We love your new look, Lena! We’re thinking about trying this ourselves!