I left my entertainment industry job to become a waitress, and it was one of the smartest things I’ve ever done

I got into the hospitality industry a couple of years ago, as I was wanting to change my head and ease my work-life stress. Yes, you read that right — I got into the food service industry to unwind. For many years, I was known within the world of TV production. I earned my keep by slaving over long hours, taking the blame for things that weren’t my fault. Sure, there are many perks to being in the entertainment industry, but it wasn’t work that was making me happy. So I’d relax by coming home after a long day and find my Zen in my kitchen.

Being in the kitchen and around food had always centered me, so when the opportunity presented itself…I became a waitress.

Yup! In my mid 30s, I did a career 180, completely changing direction. But that’s the thing about getting older — you can do things like that. Yes, my finances took a major hit, but my happiness factor went up… waaaay up. And that is something you don’t learn in school, that a professor can’t teach you. So how did it happen?

A simple question posed at the diner I used to frequent took my life path in a different direction.

Chris, a line cook at Toronto’s famed Patrician Grill, asked me one day, “Since you’re here all the time, you know how to call out an order. We need a waitress. You want the job?

I could have said no. After all, I’d never waitressed in my life. And I’m a brunch customer… I know that something crazy happens to people when they go to weekend brunch. Despite that, I agreed.

If they were crazy enough to ask me, then my answer was yes. And the reality of it was that it was exactly what I needed to do. My focus soon went from making sure production schedules were out on time, to making sure the ketchup bottles were refreshed. 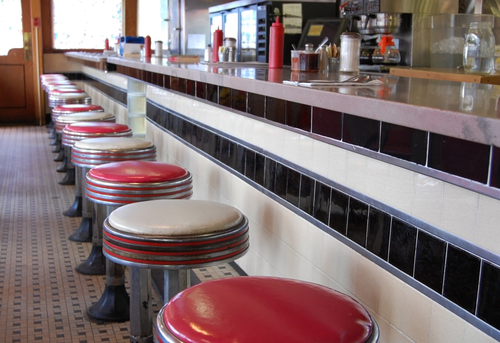 Sure, some might regard this as going backwards professionally — but I’m a gal who learned to crawl by going backwards. Maybe that had something to do with Michael Jackson, or maybe it’s just that I never fit the “normal mold.” We spend so much time trying to fit in, especially in our teen years and even in our 20s. My 25-year-old self would have thrown a fit if I’d known my future self would be keeping coffee refills coming — especially because, at that point in my life, I was deep into the world of Production Coordination on TV shows.

But my mid-30s self knew that I was tired of the working world I was in, and I needed a damn break! That diner was a second home to me, and every customer of mine got the same amount of love, as if a dear friend was over for dinner. 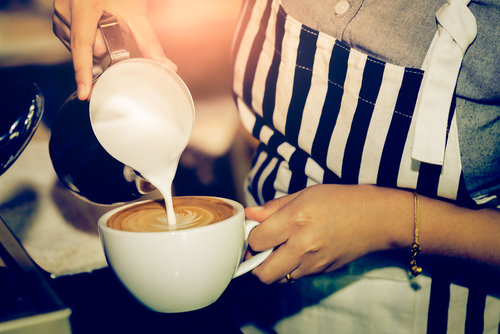 Prior to working in the restaurant industry, I’d never really given much thought to the person serving me.

And I didn’t mind that those I served as a waitress didn’t know me — and I don’t know if they ever felt bad for me. The customers weren’t to know about my entertainment industry past. They didn’t know that the late, great Robert Goulet, famous singer and actor, once called me to chat about an awards show I had worked on with him. They didn’t know that I once sat with just a handful of people to listen to Bryan Adams sing “Summer of ‘69” (my favorite song ever) during a rehearsal for his PBS special. Those details of my life weren’t necessary to get into, but I knew that they added a killer backstory to the gal who was handing them the best Club Sandwich in Toronto!

It’s not that I never had moments when I wondered, “Why am I here?” It happened whenever former TV production co-workers would come in for lunch. I had moments of self-judgement, swallowing my pride as I brought their cutlery.

But that quickly floated away on clouds of bacon, because the truth is, I didn’t envy them. I was happy — and besides, they looked really tired. 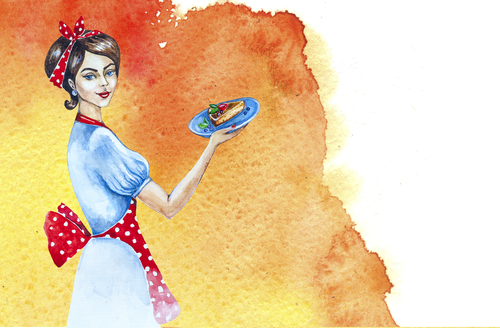 Being happy can do the most curious things to your body and the world around you, simply because a different energy flow is filtering in and out of you. It won’t necessarily make everything in your life easier, but one step at a time…amirite?!

I waitressed at the diner for a couple of years, eventually leaving to do a bunch of cool things that I’d not have envisioned previously. Taking that job was the first step in breaking through my comfort zone.

And little by little, I’m finding my purpose. Yes, I’ve stayed in the food services industry, working the cash register at Bunner’s, a landmark Vegan Bakery in Toronto — but I’m also doing stand-up comedy and producing my first documentary.

Had I not said yes to Chris that day at the diner and agreed to be their new waitress, my focus wouldn’t have shifted. It’s funny what can happen when you try something new. Because as simple as the idea may seem, something really quite magical can happen by pushing yourself onto a new path and trusting that things will work out for the best.

Kelly Aija Zemnickis is a native of Montréal and an accomplished playwright and producer. Her first play “How Does a Drug Deal Become a Decent 3rd Date?” toured across North America, making its Off-Off Broadway debut as part of the NYC Frigid Theatre Festival (2009). Kelly is also a stand-up comic, and she is currently producing her first documentary, “No Responders Left Behind” alongside Paradox Pictures. Kelly frequently muses on her lack of a love-life (and her love of food!) on her blog, Marriage & the Single Girl. Although allergic to cats, Kelly is not allergic to cat sweaters. She owns a few. You can follow her on Twitter.