My first Facebook photo shows me at 17, sitting on my bedroom floor. My thumb and index fingers form holes for my eyes, and the rest of my hands splay down my face like a mask. I’m sticking my tongue out. I’m wearing bright pinks and yellows. My ash-brown curly hair is dyed a dark burgundy.

I took that photo because I decided, at the time, that being outgoing and extroverted was the best and only way to exist if you wanted to be happy, hence the goofy face and the bright colors. I was trying to show the internet — the world — that I was cheerful, fun, a character. Like a lot of people my age, I tried to curate this persona through profile photos and silly status updates. I tried to say to the world, “I am always like this.”

My goals were as murky as my execution.

What did a “fun person look like? I asked myself.

Well, they stood out in a crowd, they laughed a lot and got a lot of attention. Cue: brightly colored, power-clashing dresses, goofy profile photos, and frequent status updates about how “all I wanted to do was ride my bike to the end of the earth.” Sometimes, I spiced things up with self-produced photo shoots, wherein my friends and I would don haphazard and mismatched costumes, all with the hope that my peers in school — and eventually in college and at work — would think that’s who I was in real life. 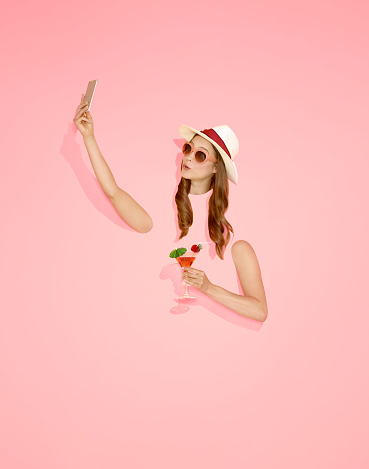 These days, most of my internet persona lives on Twitter and Instagram. It’s through photo filters and 140-characters that I try to show the quippy, brightly-colored version of me, more so than the antiquated Facebook profile photo.

There’s nothing wrong, of course, with image curation or just-because photo shoots.

But there is a point where this constant curation, and the constant quest to be ~likeable~ through a contrived internet personality, falls flat. In fact, it becomes exhausting. No one can be “on” all the time.

I also have to admit something: despite all the buzz about branding and putting your best face forward on social media, I seriously struggle with comparing myself to one particular internet presence above all else: my own.

Who am I? I ask myself. How fun do I look? How smart do I seem? Would I want to follow me?

The week, following a well-received selfie, I stared at the number of likes, the comments, and my face. My cheekbones look so good here, I think to myself. I wonder how they look to the people in my graduate classes. Do the folks that come into my office job also notice my hair parted just so? Is this who I really am?

The same thing happens after a popular Tweet. When I hit or exceed an “ideal” range of likes and retweets, I relentlessly compare every string of 140 characters in my Drafts folder to the successful one I probably have pinned. Why am I not always that witty? I wonder. Why am I not always so appreciated?

Intellectually, I know that neither the number of likes on a selfie nor the number of retweets on a Tweet is a real measure of any of these things. But it’s hard to internalize that when my social life has been entrenched in social media websites for well-over a decade. I mean, there are people I have been following online since the fifth grade.

Over the years I have found myself comparing the real me with the “internet” me more and more frequently, and I actually feel disappointed in myself when the two images don’t match up. This isn’t about the goodness or badness of social media, but about whether we have been subconsciously conditioned to compare ourselves to a persona we’ve created that is, obviously, going to be our best possible selves.

As I made my way through my early twenties, moving between cities, jobs, and schools, my internet posts were often how my peers, coworkers, and employers would be first introduced to me. It’s part and parcel of twenty-first century introductions, and I became cripplingly self-conscious of this.

The second I added someone on Facebook, I scrolled through my posts from the past week. I flipped through my profile photos. I asked myself if I would believe the words and images I had curated were representative of me if I had just met myself for the first time.

The internet version of me had taken over my real life. If my mood didn’t match what I exhibited online — if I wasn’t “on” — I felt inconsistent and, frankly, rather fake.

So, I had to ask myself: Did I curate a “best version of myself online so voraciously that my internet persona was too good to be true, even on my best day? Is it time to chill out and, maybe, not think so hard about every single post?

The most tragic part of this entire conundrum is — and I would bet you all the “likes” in the world — that none of my followers have ever stopped to consider whether my Tweets sound like something I would say in real life, or whether my skin looked better in my latest Instagram than it did in the office that day.

And when I think about how little anyone else cares about my lame Twitter jokes, or my ~fierce look~ in any ‘gram, I have to ask myself: Who do I think I’m fooling? My guess is, it’s only me. I’ve been stuck in a self-constructed cycle where my internet posts are my only measuring stick for progress — but my online self is not who I am, nor who I want to be. It’s certainly not the kind of person I admire.

Instead, I’m trying to stop wasting my energy on a competition with myself that I was never going to win.

So I’ll care a little less, think a little less, and express myself a little more freely. People aren’t consistent, let alone always their best, and they don’t have to be; we tend to like each other better that way.