Lady Gaga is pulling out all the stops with her 2019 Golden Globes beauty and fashion—not that we’d expect anything less. The A Star Is Born actress not only brought on the glitz and glamour to Sunday night’s (January 6th) ceremony, but she added major flair to her ensemble. Gaga matched her baby blue, Cinderella-esque gown to her hair.

Wearing a dramatic ballgown, Gaga took it up a notch by dyeing some of her hair the same shade of blue. Her hair was styled in a high bun, while her makeup was more minimal and muted. She kept her brows bold and her eyes a bit smoky, but the rest of her look was both regal and ethereal. 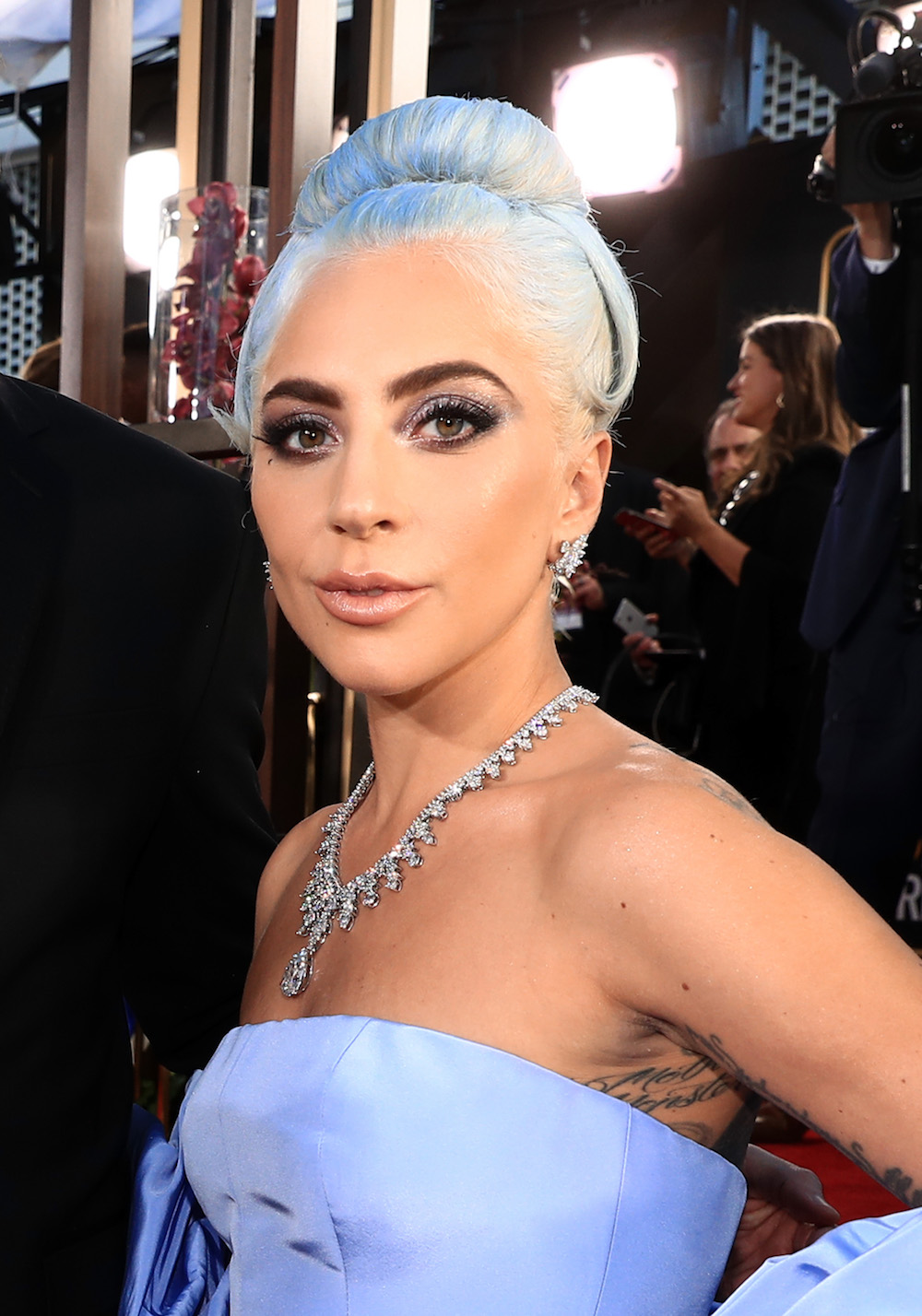 So how did Gaga get that gorgeous hair color?

Celebrity hairstylist, Frederic Aspiras used Joico’s Color Intensity line to give Gaga that fairytale shade of blue, according to a press statement sent to HelloGiggles. Since the star’s hair was already platinum blonde, her stylist first used Joico’s Blonde Life Lightener as a base and followed up with the brand’s Semi Permanent Color Intensity products, mixing the shades Sky and Rose with the Clear Mixer “to make the cerulean blue.”

To give her that Cinderella updo, Frederic used the GHD Oval Dress Brush to “sweep the hair up in to a ponytail.” He wrapped and twisted the hair into a half bun, leaving the ends of her hair out. “I then wrapped the ends of her hair around the GHD Curve Soft Curl Iron to create the long lasting curl,” he said.

As for her fairytale-like makeup? Sarah Tanno used Marc Jacob Beauty products to give Gaga that silver smoky eye, nude lips, and glowing skin. “She loved the idea of incorporating the color of the dress into her hair and makeup,” the makeup artist said in a press statement. “She wanted to feel like Lady Gaga.”

The key makeup products were the Eye-Conic Multi-Finish Eyeshadow in Frivolux, the Highliner Gel Eye Crayon in Blacquer, and the See-Quins Glam Glitter Eyeshadow in Flashlight. 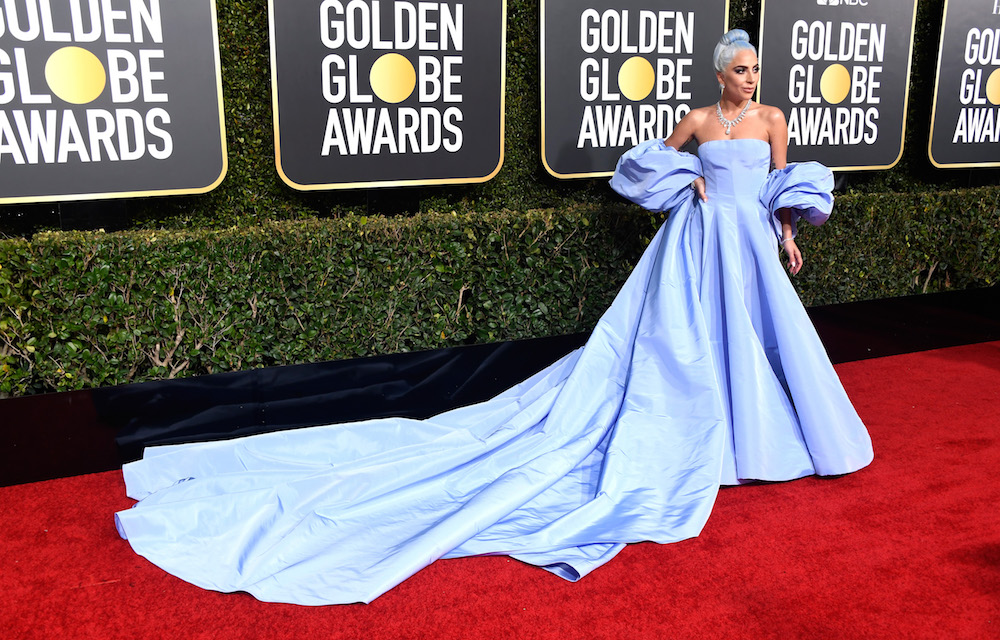 At the awards ceremony, Gaga wore a custom couture Valentino gown and Tiffany’s diamond necklace. She even showed off her “giant platforms,” as she called them while speaking with Ryan Seacrest, telling the E! host that they were Giuseppe Zanotti shoes.

People on Twitter even compared Gaga’s ensemble to Judy Garland’s from the 1954 version of A Star is Born.

A closer look at the gown: 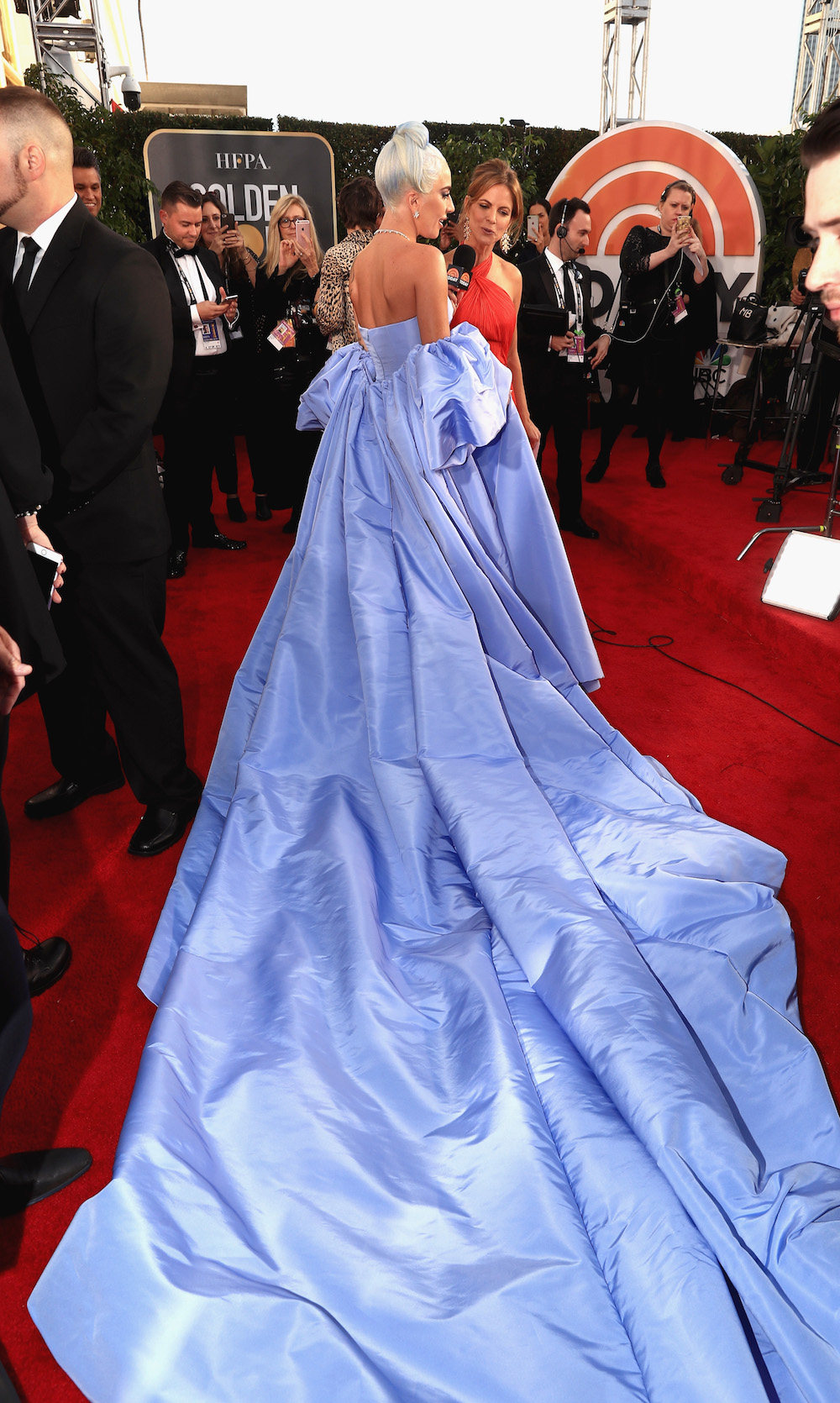 The actress won the Golden Globe for Best Original Song for her single “Shallow.” Back in 2016, she took home the Globe for her American Horror Story: Hotel performance.