How Koa Beck Says You Can Stop Perpetuating White Feminism

The author discusses her debut book and the mainstream feminist movement.

The world we live in shapes how we view ourselves—and how others view us. But what happens when there’s a mismatch between cultural narratives and individual identities? In our monthly series The Blend, writers from multicultural backgrounds discuss the moment that made them think differently about these dominant narratives—and how that affects their lives.

Koa Beck has had a prestigious career in women’s media as the former executive editor of Vogue.com and editor-in-chief of Jezebel. But as a biracial woman who is part of the LGBTQ community, she, unfortunately, was often privy to the ways white feminism dictated the way her and her colleagues’ stories were told.

In her debut book, White Feminism: From the Suffragettes to Influencers and Who They Leave Behind, (which was released on January 5th), Beck recalls a time when an editor declared, for instance, that a story she pitched about transgender men exploring birthing options was “too niche” for a mainstream women’s publication. While this was just one example of how white feminism has infiltrated the mainstream feminist movement—despite the fact that non-cis women have had a long storied history with feminism—moments like these throughout Beck’s career inspired her to explore the topic of white feminism further. And after being awarded the Joan Shorenstein Fellowship at Harvard Kennedy School in spring 2019—which examines “the intersection of media, politics and public policy”—she began writing White Feminism, an exploration of how society commercialized feminism and ignores Black, Indigenous, and other women of color.

We sat down with Beck to discuss the difference between white feminism and inclusive feminism, why we need to reframe the way we look at women’s success, and how we can honor the feminist legacy that Black, Indigenous, and other women of color have built.

HelloGiggles (HG): How would you describe white feminism?

Koa Beck (KB): White feminism is an ideology and a practice towards achieving gender equality that relies on exploitative pillars from white supremacy or capitalism to achieve gender progress.

HG: In your book, you discuss how media is guilty of perpetuating white feminism and used to conquer male-dominated industries to understand gender equality. How can we profile women’s accomplishments in media without perpetuating a “conquering” white feminist narrative?

KB: I think one of the primary reasons why conquering has been adapted so seamlessly into white feminist rhetoric is that white feminism is ultimately about maintaining power and supremacy. It’s never been about re-interrogating power or in some ways, disassembling it or redistributing it, [like] a lot of other feminisms by women of color, Native American women, Chicana women, or Black lesbian feminism.

When you consider a lot of the white feminist narratives in recent times about achieving seniority, having a corner office, and being the head of a company and finding your own enterprise, [women] achieve [these things by] assuming [they] can. But what have [they] had to do to get there in terms of the exploitation of other workers whether full-time, part-time, or freelance? [There’s] no introduction of paid parental leave, no subsidized child care. If it’s just power to power’s end, then that is what white feminism directly inherits from white supremacy.

HG: You are the former editor-in-chief of Jezebel, so I’m especially curious as to how this idea of white feminism applies to the media. Often, it’s white editors and writers behind the scenes, so how can we make sure women of color are talked about without perpetuating a white feminist narrative?

KB: Well, I think the way that some women’s media brands have handled that is by not just  [featuring] private business owners, but also doing a “day in the life” [feature] about community organizers. And if they are not [doing] that, they probably should. But they should also get away from the idea of “time” as a feminist metric. I see this a lot in the types of coverage you’re talking about. I’m sure you’ve seen it, too. I cite it a lot in my book. In terms of the way women manipulate time and are able to contain it and use it makes [women] feminist powerhouses.

For a lot of women and nonbinary people, their time is not their own, in terms of being a caregiver and needing to do a lot of domestic work that isn’t on a fancy laptop or a smartphone. This idea of creating this elaborate matrix of time, and how that makes [women] these amazing feminists—that needs to be left behind. 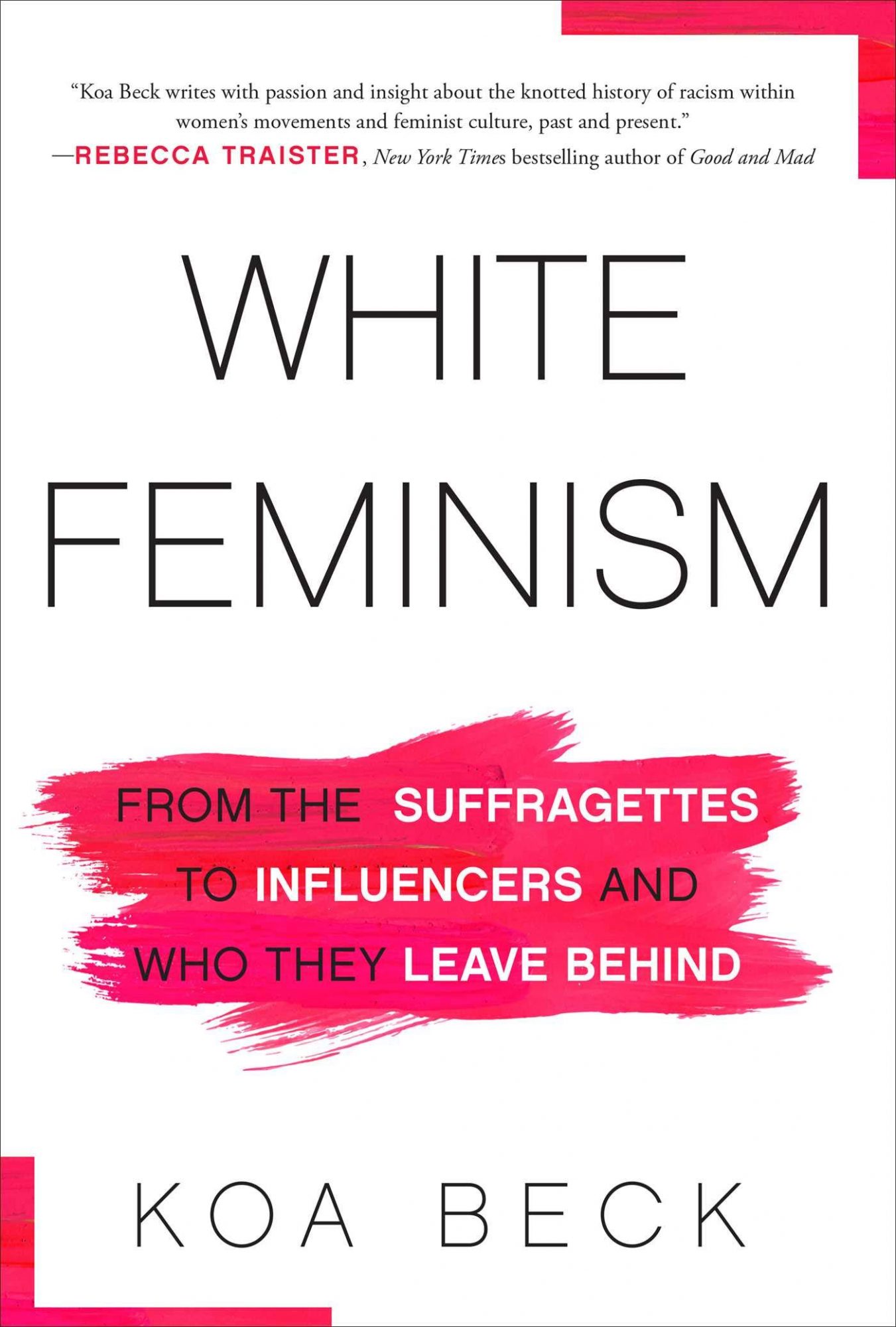 HG: How can the mainstream feminist movement do a better job of supporting Indigenous rights?

KB: A good place to start—granted this is not the entirety of what the movement could do—is [to show] visibility. For a lot of mainstream women’s publications, when we’re talking about gender rights, feminism or feminist progress Native American women are not even factored into that. There’s no assessment of their circumstances, their abuse rates, and their specific challenges because of their gender and their Native American [heritage]. Don’t cover them every couple of months and say that “we did it,” and then go do more “feminist time metric content,” [instead], routinely cover them.

HG: In the book, you mentioned The Wing and how the racist controversy behind it has evolved even after the publication of your book. How do we create women-geared brands—especially in the wellness industry—without perpetuating a white feminist narrative?

KB: I think we need to start with policy, in terms of who gets to sit at these companies and who gets to operate within specific capacities. In my book, I spend a fair amount of time analyzing the pipeline defense, which is this idea that a powerful [business] can’t find a qualified Black woman to run a company or can’t find a Latina with a specific background, and that excuse is a window into all of the ways in which the United States disadvantages those exact women. So having policies that are attuned to these gendered realities are important, but this should come from our government.

I also spend some time in the book talking about who has disposable income. Traditionally speaking, white women have way more—which is referred to in economic reports as “wealth” aka the money that they’re not spending on rent, food, bills, and essentials. So that’s a much bigger question in terms of how we set up certain women in our culture to have a certain amount of generational wealth that other women clearly don’t have.

HG: This past year, we’ve seen some Black women deservedly promoted or brought in to take over certain brands within the media and the corporate world. However, how can companies get away from just tokenizing?

KB: One of the things I’m very clear on in my book is that I don’t believe that one “diversity hire” should be expected to change the entire infrastructure and legacy of a company or brand. That sets that person up to fail. Mostly because what they are up against is a constellation of power, it’s not a question of hiring one person, it’s a whole mindset.

HG: A recent statistic from the National Women’s Law Center is that 865,000 women have dropped out of the traditional workforce due to juggling working from home and virtual schooling during the pandemic. What do you suggest for an issue like this? How can we better address this as a feminist issue?

KB: I do find COVID to be a profoundly feminist issue, and a deeply intersectional feminist issue because it does overlap so much with poverty, class, and care work. I think that Congress has really failed us as a country in terms of securing the economic future of this country. I think that we need subsidized child care. We need federally funded paid parental leave. On top of that, we also need the Federal Bill of Rights for Domestic Workers. Kamala Harris introduced this bill last year, and I’m hoping that now that she’s vice-president elect that [the bill] will go even further and be one of their first pieces of legislation. But for anyone who’s unfamiliar, it secures that domestic workers have rights to health insurance, protections within the home, job advancement, job training, and health insurance along with other labor protections that we would think of for white-collar jobs, but for people who come into your home and clean and take care of your family members.

Note: This interview has been shortened and condensed for length and clarity.