Why knitting is so important for my mental health

Knit, knit, purl, purl, knit, knit, purl, purl. Those repeated, rhythmic patterns quelled my rising heart rate and kept my hands from shaking. Counting every single stitch I constructed on the needle formed the perfect hole in my brain, one where the light shined through and managed to keep me sane.

In July 2013, I was drowning in the abyss of mental illness. Even after I left the hospital, a series of life events seemed to keep pulling me deeper into a dark tunnel, with no conceivable end in sight. I was always a nervous child, chewing on my fingernails, twirling my hair repeatedly, and struggling with trichotillomania before I even turned 10. As an adult, my habits quickly devolved into such incapacitating anxiety that I would lay in a dark room for days at a time, only leaving the house in sweatpants to feed myself — a portrait I’m sure many recognize. 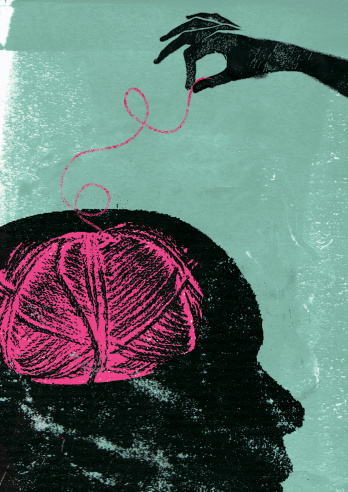 So, I decided to try a variety of things to manage my anxiety.

A few therapists, some meditation and deep breathing, changes to my diet, and even some experimental self-medicating to help me function more normally from week to week. Addiction runs rampant in my family, so taking prescription medication always seemed unappealing to me. Of course, for some, it works wonders; in fact, I have many friends and family whose lives have dramatically improved through a combination of medication and therapy to manage their particular ailments. It’s a deeply personal choice, one that each person is entitled to make for themselves.

A couple of bad years can add up quickly though, crushing even the best of mental health warriors. I was desperate to feel better, but nothing ever seemed to soothe the persistent gnawing at my mind.

For those of us suffering from mental ailments, it’s unbearably difficult to explain how it feels to be inside your brain for just one day. Some days, my mind is an endless loop, where I begin to worry about the outcome of a particular event or circumstance, break down all of the aspects about my worry, and then finally come to a perfectly logical, reasonable conclusion. However, when I should be hitting the end of that loop, bringing it to a screeching halt, I instead whiz right past the designated exit ramp, only to get caught on the loop once more. So, I tentatively went about my days, constantly feeling like a taut, frayed string that was about to snap at any moment. 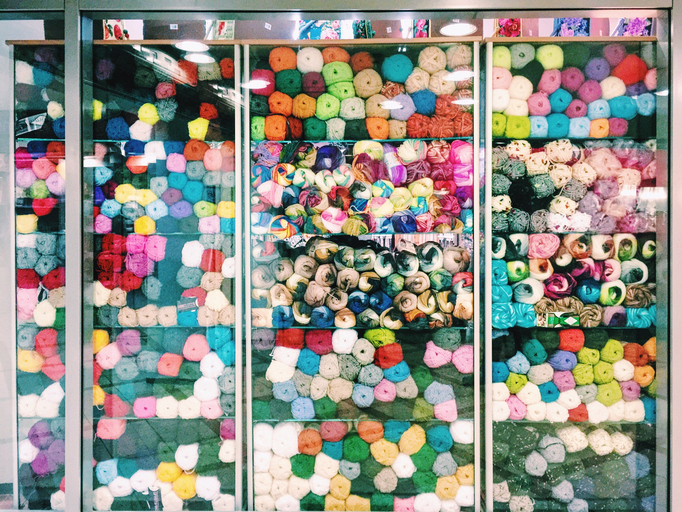 I can’t remember what I needed, but something drew me over to the yarn section in a terribly lit corner of the shop. I had a couple of friends who were knitters in high school, and they taught me how to make a hat on a circular loom. I made one hat with it, and never returned to textiles again.

I lingered in the aisle, entranced by all the colors, sizes, and textures. I decided, in that moment, that I was going to teach myself how to knit. How hard could it be? I had the internet to assist me in the endeavor, and I was fairly confident that it only took one type of stitch to make a scarf. It had to be relatively straightforward, right? I quickly grabbed a big ball of cheap blue yarn and two knitting needles that seemed to be about the right size to help me achieve my goal.

As soon as I arrived home, I pulled out my freshly bought treats and set out to work. That first afternoon — and well into the evening — it took me over three hours to figure out how to even cast the yarn onto a needle and knit two full rows. I must have started and re-started a dozen times, mystified as to how to get the yarn to loop around the needle just so or get my stitches even and tight. My fingertips felt unbelievably raw and tender to the touch. But, I had successfully mastered a basic knit stitch.

More importantly, I spent those hours of my day dynamically engrossed in an activity — not fixated on how generally anxious I felt.

As psychologists would say, I was experiencing “flow” for the first time in years. I distinctly remember holding my purple needles up to the light, gleaming with pride at the skill I had just taught myself.

Knitting is considered a crafting activity — a work that results in a specific, tangible output. Crafting is unique because it requires use of various parts of the brain: problem solving, creativity, and visuospatial processing. As noted in an article from the New York Times earlier this year, knitting has a variety of health benefits. What little research that has been completed on the health benefits of crafting show encouraging results. A 2009 University of British Columbia study found that out of 38 women with anorexia nervosa who were taught to knit, 74 percent of the women said that their fears were lessened after three weeks of knitting.

Furthermore, a study published in 2012 by the Mayo Clinic determined that those who engaged in crafts like knitting and crocheting had a diminished chance of developing mild cognitive impairment and memory loss. The sense of accomplishment one derives from seeing a project take shape is equivalent to an anti-depressant; a study printed in the British Journal of Occupational Therapy found that 81 percent of the 3,500 knitters studied reported feeling “happy” after knitting. Over half of the respondents felt “very happy” post-knitting.

Clearly, I’m not the only one who has reaped overwhelming benefits from grasping a needle and a ball of yarn.

It took me until the end of the year to finish that first scarf. It was an intensive labor of love, one that required my undivided attention to detail and complete immersion in the tactile experience. But, I was struck by how mindless and repetitive the activity became in the best ways possible. I was suddenly able to sit, be still, and even have an engaging conversation with friends because my hands were hard at work.

In the moments when my mind would normally race and descend into dark corners, I held the yarn between my fingers and let the soothing motion of the needles transport me away to a place of peace.

The perfectly even, tight stitches that were actively created before my eyes made me so unbelievably satisfied. I can’t even describe the pure elation I felt when I cast off my first scarf.

At an age when I thought I was well past my prime to teach myself “new tricks,” I picked up a hobby that profoundly impacted my mental health, pushing myself far beyond the self-imposed limits of my comfort zone. Knitting assisted me in effectively managing my anxiety more than anything else ever has, and it certainly was never prescribed by one of my therapists. I built my own happiness with both of my hands and few skeins of yarn. 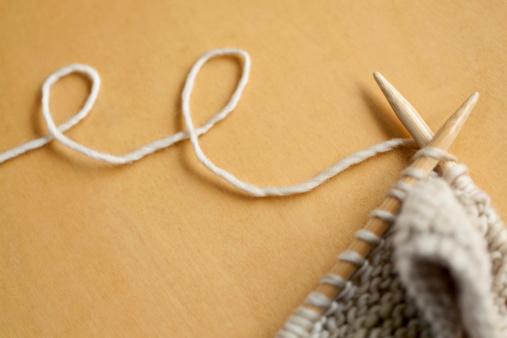 I would love to say that I’m now a prolific knitter who has made perfect holiday sweaters for everyone I know. The truth is, I don’t knit nearly as often as I’d like these days — and I’m barely proficient enough to complete more than a few small projects. Just as my taste buds change with age, so too do my mental health needs. They are ever-evolving, and my management of them requires different things of me at different times. One of the most common misconceptions about mental illness is that it’s relatively static, but I feel nowhere near the same as I did last week, versus a month ago, versus five years ago. I’m distinctly aware of the monster lurking in my mind, but it’s retreated for now.

And when it rears its ugly head, I know my knitting basket is filled with bountiful yarn just a few steps away.

Nicole Zub is a freelance writer and law student currently living on a Kentucky horse farm with her partner. She graduated in 2011 from Northeastern University. When she isn’t imbibing copious amounts of caffeine, you can find her with her nose in a book, adorning her neck with scarves, or experimenting in the kitchen. Follow her on Twitter.