These kids have some constructive criticism for Adele (yes, THAT Adele)

We regular Internet-dwellers love watching random kids do and say hilarious things. That’s why the “Kids React To” series on the super-popular Fine Brothers YouTube channel is one of our absolute faves. Kids have no filter, which makes them not only funny, but inherently brave. We could totally take a leaf out of kids’ books. And late last week, the Fine Brothers posted the newest addition to their “Kids React To: Pop Stars” series, featuring Adele’s “Hello” and “Rolling in the Deep.” The video already has almost 1.5 million views, proving the rest of the world loves watching kids react to older-people culture too.

Going in, we’re asking ourselves a few questions: Will these kids understand that they’re in the remote presence of a vocal legend? Will they even recognize her? Will they say, “UGH THIS IS BORING, GIVE ME DISNEY MUSIC AND A LUNCHABLE!?” So many questions, we could start taking bets.

But luckily, these kids know what’s up right from the start. Pretty much all of them in the first 30 seconds or so of the video are like, “OMG ADELE, YAS QUEEN!” One little boy – the MVP of this video, if I’m being honest – totally gets into singing all the lyrics to “Hello” and claps/dances right along with “Rolling in the Deep.” Another one is like, “My mom likes this song, but I don’t.” (He will learn.) One kid head bangs, which…yes. Sure. Who hasn’t head banged to Adele? 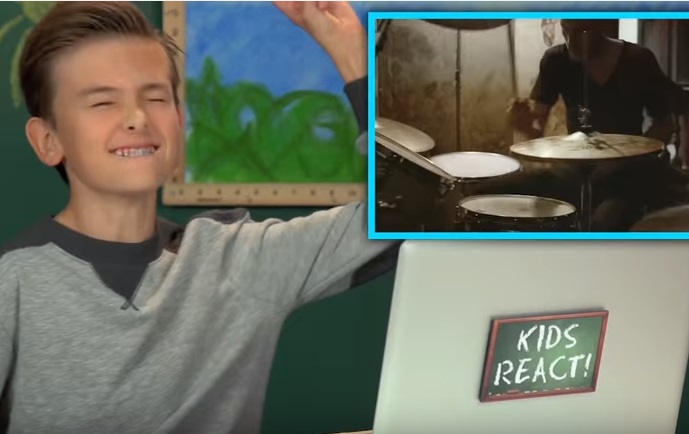 It gets better though. A six-year-old girl just stares like she has no clue whether to speak or take a nap. Two boys say that it’s such a good song and, “Like, the most popular song ever.” It’s actually really awesome hearing not only kids, but young men appreciate the powerhouse that is Adele. A few of the older girls basically just gush over how great Adele is, and we can totally relate. Head-banger boy also asks, “Why did Adele cross the road? TO SAY HELLO FROM THE OTHER SIDE!” Can’t even hate.

The kids have a tiny bit of criticism for Adele, saying that her music is more fitting for their parents, but luckily most of their words – including their reactions to the public making asinine comments about her weight – are super positive and supportive. So, in a nutshell? Even kids know how amazing Adele is.

Check out the entire video below and wax nostalgic with us about how great it’d be to be a kid again.