The party is over! Singer, Kanye West is cancelling the rest of his Saint Pablo tour and people are freaking out.

All heck has broken loose in the West camp and fans are the ones paying the price. The 39-year-old singer is officially done with his current tour, cancelling more than 20 upcoming concerts.

According to Pitchfork, a representative for West confirmed that the remaining dates for the Saint Pablo tour have been cancelled. The good news is that “tickets will be fully refunded at point of purchase,” the publication reported.

The sad news comes after West was supposed to open the doors on his make up concert in Los Angeles on Sunday, after originally cancelling on November 3, due to losing his voice, and cutting his Sacramento concert short on Nov. 19.

While fans are not pleased that they won’t be able to see the singer perform his The Life of Pablo album live, this cancelation has us wondering if it’s the best thing for West, since he’s been having a lot of meltdowns recently and really could use a break.

His Sacramento stage rant, which included shading Beyonce and blasting the presidential election, is one of the biggest reasons he should probably take a breather before returning to the concert circuit.

"Beyoncé — I was hurt because I heard that you said you wouldn't perform unless you won Video of the Year over me and over 'Hotline Bling' [at the VMAs]. In my opinion... now don't go dissing Beyoncé, she's great. Taylor Swift is great. We are all great people. We are all equal," West said as part of his rant last week. 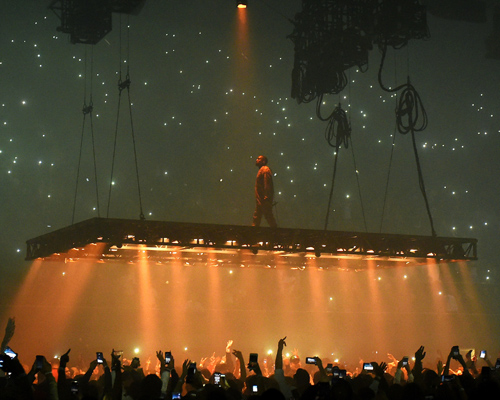 With all this drama, fans have taken to Twitter to share their frustration and love for the singer. In fact, the hashtag, #KanyeIsOverParty is trending and we totally agree, the party is over, buddy.

Maybe this is a cry for help? Maybe West just needs some family time? Either way, it’s clear something is up with the “Famous” singer and we hope he figures it out and returns to making music as soon as possible.