Justin Bieber is growing up into a fine looking young man right before our eyes. The 21-year-old pop star is featured on the March cover of GQ, decked out in designer clothes and looking rakish as ever. His dapper photo is headlined with “Let Us Now Forgive Justin Bieber.”

However, Bieber is quick to point out that he hasn’t exactly apologized. In the last few years, the singer spent quite some time in the spotlight for everything but his music, with reports of wild partying, a slew of missteps, and generally being a jerk. When he released his single “Sorry,” the general public thought it was him apologizing for his bad-boy ways.

He told GQ otherwise. “People ran with that, that I was like, apologizing with that song and stuff. It really had nothing to do with that… It was about a girl.” 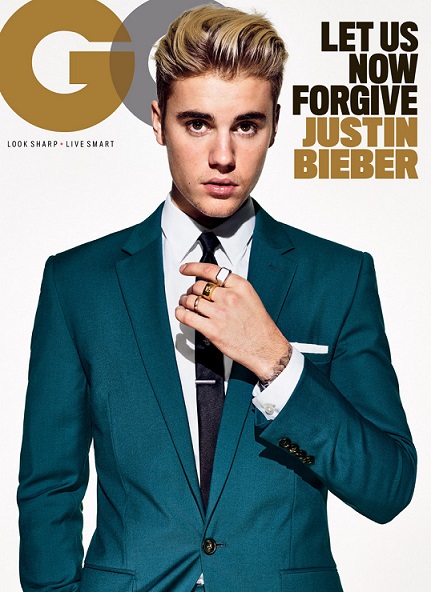 All great songs are. It’s pretty safe to assume it’s about Selena Gomez (but it’s definitely NOT confirmed), Bieber’s ex-girlfriend whose song, “Same Old Love,” is rumored to be about getting over Justin.

While his song isn’t an apology for his past behavior, he did offer up an explanation. “Everyone when they start growing up realizes, ‘Man, I did some dumb shit when I was younger,’” he said. “It’s not just me. If I could go back I wouldn’t really change much. I think it’s all my journey. That stuff made me who I am.”

Those are wise words coming from someone who has basically grown up in the spotlight. It’s tough to make mistakes when the whole world is watching.