John Legend recreated the “angry Arthur meme,” and it is perfect

Yes, yes, he gets it. After a ton of fans pointed it out, John Legend knows he resembles Arthur, the cartoon aardvark. But instead of fighting the comparisons, Legend has officially just gone with the joke. As in, he just recreated the iconic “angry Arthur” meme (you know the one).

The “John Legend resembles Arthur” joke has been making the rounds for well over a year after a genius viral tweet pointed out the undeniable resemblance. And once you see it, you can never unsee it, which is a good thing.

Teigen, of course, uses the meme with relish. As she should.

The epic recreation all happened thanks to a Google ad starring Legend and Teigen. In it, Legend tries on a ton of new outfits and sends videos of his various ensembles to Teigen (at one point she literally utters the phrase, “You look like a sexy Freddy Krueger.” LOL).

However, the best part of the ad comes at the very end, when Legend tries on a — yes — yellow sweater and blue pants. This causes Teigen to roar with laughter, and an angry Legend to literally ball his fist. And it is a perfect moment.

We may or may not have watched this five times in a row. 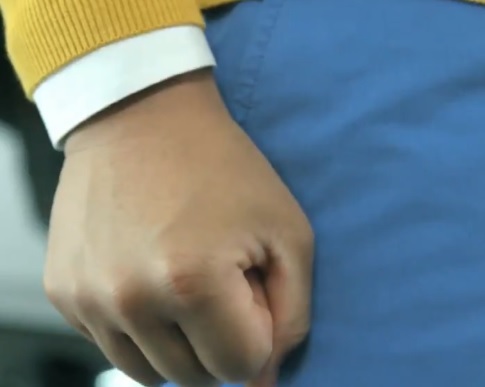 Hey — it could be a lot worse. Arthur’s a pretty nice guy, and there are less awesome cartoons to look like. Now excuse us while we go send this commercial to 20 of our friends.