J.K. Rowling has a really good point about Donald Trump and freedom of speech

It’s no secret that Harry Potter author J.K. Rowling is not a fan of Donald Trump. In fact, she has referred to him in the past as being worse than Voldemort. But at the 2016 PEN Literary Awards Gala in New York City last night, she wanted to one thing very clear: Even though she despises what he says, she defends his right to say it.

“The tides of populism and nationalism currently sweeping many developed countries have been accompanied by demands that unwelcome and inconvenient voices be removed from public discourse,” J.K. said. She then cited the online petition to ban Donald Trump from entry into the UK — which incited much applause before J.K. kindly asked them to listen before applauding. 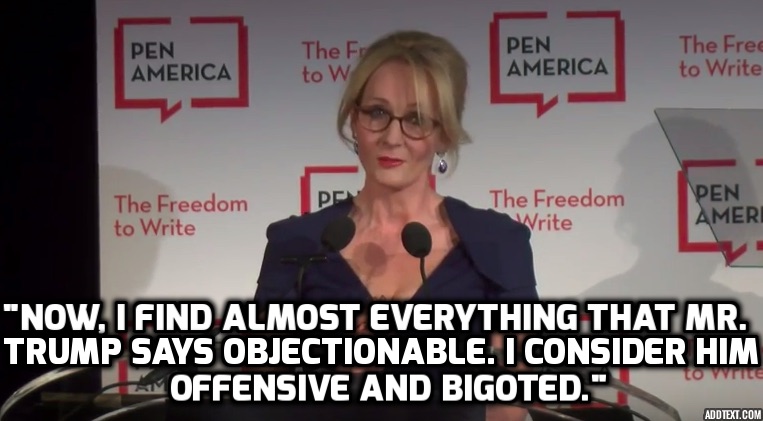 Although J.K. once again made it quite clear that she disagrees wholeheartedly with The Donald, she doesn’t support the petition. “But he has my full support to come to my country and be offensive and bigoted there,” she continued. “His freedom to speak protects my freedom to call him a bigot.” 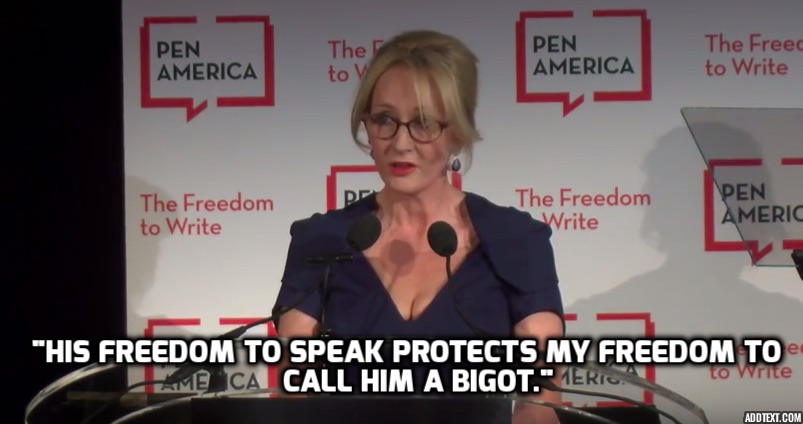 J.K. explained that even if someone is saying something absolutely terrible, we must always defend everyone’s freedom of speech. If we don’t, we have “no moral grounds on which to argue that those offended by feminism or the right for transgender rights or universal suffrage should not oppress campaigners for those causes.”

That’s exactly why she supports her critics’ right to claim that she’s “trying to convert their children to Satanism” — because allowing them to speak freely means that she’s “free to explain that I’m exploring human nature and morality, or to say, ‘You’re an idiot,’” she joked.

Even though Donald Trump says vile, awful things, we can’t ban him from countries, she said:

J.K. is absolutely right. We may take offense to what Donald Trump says (and tweets) and we may find his views abhorrent, but the reason we’re able to speak about these opinions is the same reason Trump is allowed to speak his — America’s good ol’ First Amendment. As always, J.K. has got some serious Dumbledore-like wisdom.

You can watch the whole amazing speech from the PEN gala below. https://www.youtube.com/watch?v=