Please do watch Jimmy Fallon being terrified by a scorpion

Jimmy Fallon is known for a lot of things, but being able to keep a straight face isn’t exactly one of them! The talk show host can’t seem to hide his emotions. And we love watching him even more for it.

So seeing Jimmy Fallon freak out over a scorpion on his show is even more entertaining thanks to his expressive face. Recently, Robert Irwin, son of the late and great Steve Irwin, visited The Tonight Show. Irwin was promoting his new channel Crikey! Club, which shows behind-the-scenes footage of the Australia Zoo. And, of course, he brought on some cool animals to show Fallon.

One of them was Jane, the Dictator Scorpion.

Since scorpions aren’t exactly known for their fluffy, cuddly nature, Fallon was understandably freaked out. And his reactions to Irwin’s handling of the animal are pure gold. It’s honestly probably how all of us would react if we had to “play nice” with a scorpion! Fallon starts the interaction with Jane in full freak out mode. And it doesn’t get better no matter how much time passes.

Irwin shares all sorts of fascinating facts about Jane. Every time he does, Jimmy gets more and more freaked out by the ongoing presence of the critter.

Fallon is clearly not having it, despite Irwin’s best attempts.

Afterwards, Irwin brings on a series of different animals that Jimmy has a great time hanging out with. He even ends up cuddling with some of the creatures. 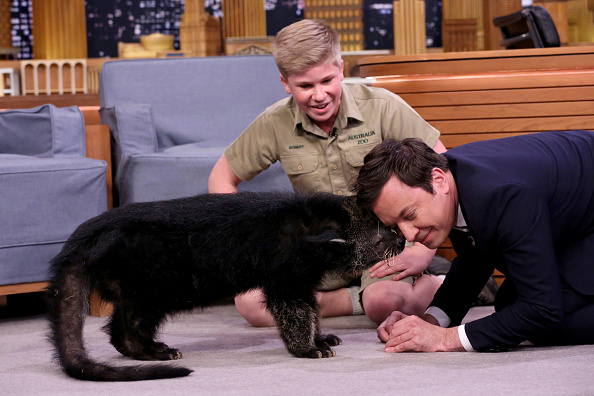 We’re big fans of seeing Irwin and Fallon hanging out with animals together. It’s fun to see when Fallon is a fan of them…but almost even more fun when he’s scared of them.