Texting has come so far in just a short time. That’s why we’re so glad that Jenny Slate offered advice about texting and phone calls. In a new video from Vanity Fair, she shares some opinions we think are pretty spot-on.

Back in the day, texting used to cost at least five cents. That means that texts — which had a character limit — pretty much had to mean something, or be super important. Unless you were totally fine with a huge phone bill.

These days, texting has gotten a lot cheaper, and has become a key part in any new relationship. In the video, Slate took a line from Madison Moore over at Thought Catalog and gave her two cents. (Er — five cents.)

Slate notes that Moore believes that texting and dating are two completely different things. With texting, you’re simply interacting with a screen. 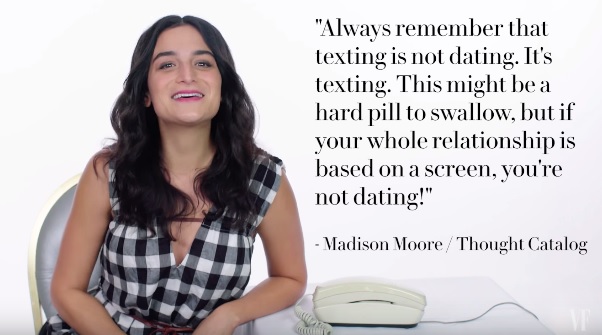 However, Slate stood up for texting, noting that it’s a great way to start building a little bit of self-confidence while getting to know someone new.

"You can get so intimate with people over text, and not just because you send them, like, a picture of your butt," she said. "It's that like, you just don't have to feel as nervous as you feel face-to-face. "

We’re not sure what Slate — who has famously dated actor Chris Evans in the past — has to feel nervous about. But hey, she’s only human.

In the video, she also discussed topics like why saying “hello” to someone on the phone is still very important. 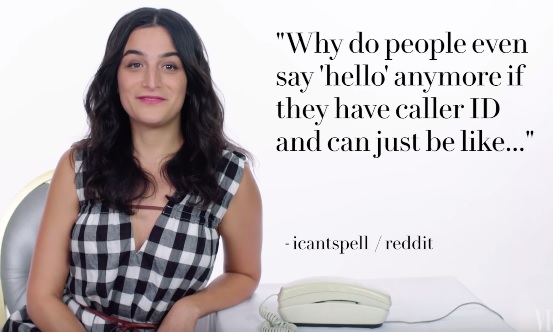 "I think that it's a fundamental and simple pleasure to greet people," she commented. "And hopefully we're not all so disgusting by this point that we just, like, computer each other all the time."

Agreed. While we definitely text more than talk these days, we’re kind of hoping that the simple art of saying “hello” never dies.

Next time we have a phone etiquette question, we’re going right to Jenny Slate.