Is Jennifer Lawrence trying to reinvent herself? 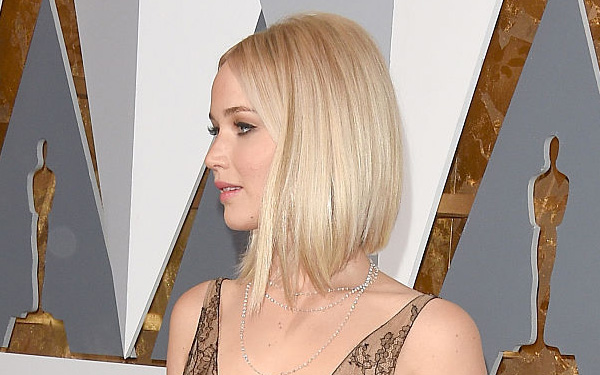 In seven years, Jennifer Lawrence has been nominated for four Oscars. She has been, in turn, the bombshell ingénue, the down-to-earth YA heroine, the sexy superheroine, the iconoclast’s muse, the potty-mouthed girl next door. She has been simultaneously inescapable and elusive, the talk of the Internet even when she’s said and done nothing. She’s been speaking out more than ever, staking her name to social causes and joining the #girlsquad revolution of the past couple of years. However, this past weekend, she was weirdly absent from the Oscars red carpet. She wore a non-starter of a gown instead of her more show-stopping fare; she avoided the press; she skipped most of the red carpet.

Freed of her franchises, riding a critical downswing, and with a slate of promising projects on the horizon, it’s natural to ask: Where is Jennifer Lawrence going? Does she even know? Turns out, we can suss that information out through none other than her subtly evolving public image and personas.

THE GIRL NEXT DOOR 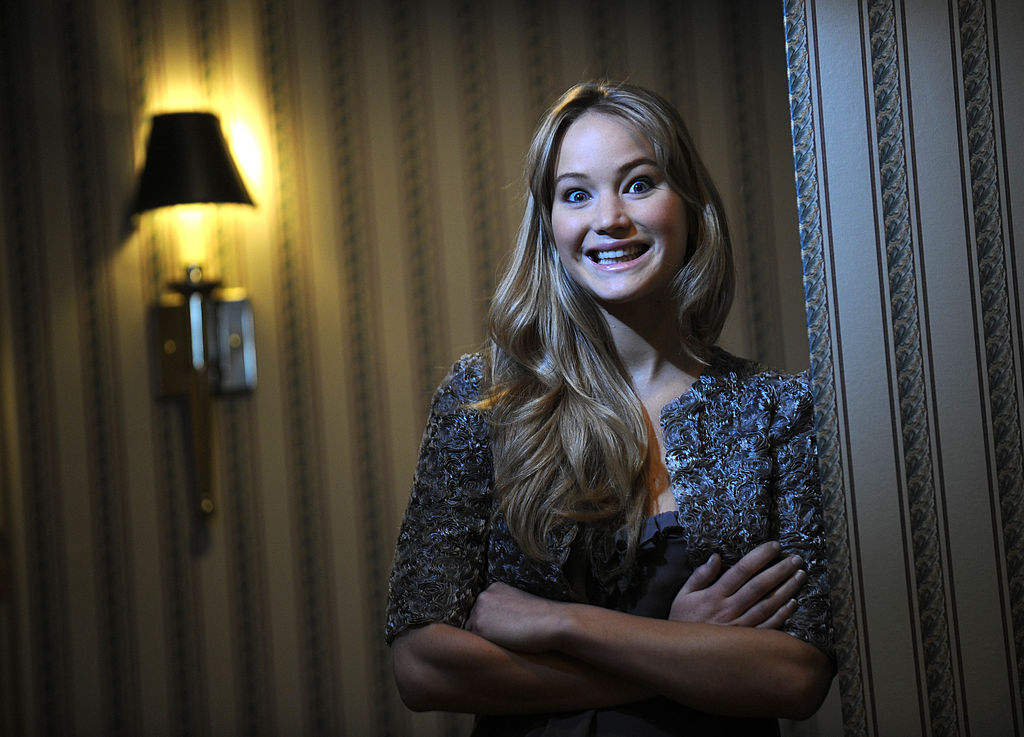 It is easy to forget that Jennifer Lawrence was once unknown, that she was a member of a TBS sitcom and spent her time posing for goofy indie film festival portraits. For most people, their introduction to the woman who’d become JLaw was via this incredibly simple, instantly iconic gown at the 2011 Oscars: 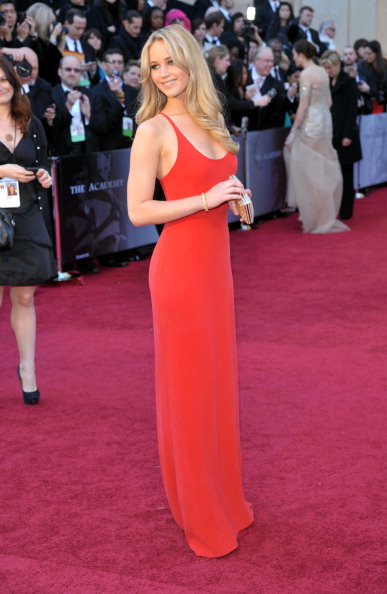 Every year, unknowns (who are usually only unknown to the general public vs. the film industry) get nominated for big awards. Many actors, and especially actresses, get one shot to make a big impression on these international stages. The ones who last are the ones who can make an impact, and fast; this siren gown rendered JLaw unforgettable and helped level her up very quickly to the next level of stardom. Sure, she’d been in three films before Winter’s Bone, but that was glossed over by an entertainment press and viewing public who were dazzled by this young star. (See also: Emma Stone and, more recently, Margot Robbie.)

What did hot young stars do before the rise of the YA adaptation franchise? Perhaps JLaw set the template — months after her bombshell turn at the Oscars, she landed the role of Katniss Everdeen and a permanent spot in the Tumblr fandom canon.

It’s easy to forget that Lawrence’s first fandom-friendly role was actually secured before her international star-making turn in The Hunger Games films or her first Oscars nomination: She was cast as the new Mystique in July, 2010. X-Men: First Class came out before The Hunger Games; the former reminded people that the latter was coming, while the latter’s press tour cemented her uber-relatable, goofy persona.

Though her initial public image appeal surely wasn’t divorced from her All–American looks, even a dramatic pixie haircut couldn’t shake peoples’ adoration of this young woman who said everything on her mind. And, she’d also begun making her moves into the more prestigious side of the film world; in 2012, she began her long-running partnership with the French fashion house Dior, and in 2013, she starred in director David O. Russell’s Silver Linings Playbook,marking her first collaboration both with him and actor Bradley Cooper. For this film, she received a second Oscar nomination and her first win. Her fall on the theater steps has outlived the Internet meme cycle.http://i-nsan.tumblr.com/post/43988868452

Then came American Hustle and another Oscar nomination. She seemed unstoppable, untouchable; though, her Dior contract oftentimes landed her in outfits like this and this. But that didn’t stop the JLaw love until early 2014, when the definitive Jennifer Lawrence celebrity case study dropped: BuzzFeed dubbed her a “cool girl” right before the film version of Gone Girl re-redefined the “cool girl,” and so began a sort of JLaw fatigue. All this, and then she “repeated” her Oscars fall.

What once endeared her to millions (her frankness, her crassness, her “regular girl” performance/persona/actual self) had suddenly soured — a phenomenon that’s happened to women time and time again. (Just ask Anne Hathaway, who went from the beloved Mia Thermopolis to “so annoying” for, most likely, daring to wear her feelings and ambition on her sleeve.)

Everything changed for Lawrence when she was one of the main targets in a nude photo hack on August 2014. She’d just ended her press tour run for X-Men: Days of Future Past, attended Comic-Con, and was about to ramp up the press for Mockingjay: Part 1.

Six weeks later, she fought back in a Vanity Fair interview that eviscerated said hackers and re-established herself as a force to be reckoned with.

“It is not a scandal. It is a sex crime. It is a sexual violation. It’s disgusting Anybody who looked at those pictures, you’re perpetuating a sexual offense. You should cower with shame.”

She walked out with an umbrella with a middle finger on it; she was confirmed to be dating Coldplay singer Chris Martin; she started stepping out in (mostly) more “mature” red carpet looks, courtesy of her continued contract with Dior. During this time, she had her first “true” movie flop — Serena, which paired her once again with Bradley Cooper but had none of the sparkle of their previous collaborations.

Speaking of Cooper: Both he and David O. Russell have been monumental parts of JLaw’s artistic development during this third stage of her life. This was picked up by Vulture, in which they analyzed how her, Emma Stone, and Scarlett Johansson almost always act against much older men. There is nothing inherently bad about that, but this older man/younger woman relationship, even when it comes from a place of mentoring, has, as Vulture showed, interesting historical and cultural overtones. At this point, JLaw was wrapping up Joy, her third collaboration with O. Russell and fourth with Cooper. She was set to be playing a woman from her early ’20s into her middle age, a feat that has as much to do with O. Russell’s obsession with her as it does with Hollywood’s continued “lack” of roles for women over 30.

Concurrently! In summer and fall 2015, Lawrence struck up friendships with Amy Schumer and Lena Dunham, two high-profile Hollywood feminists. With the former, they became quick besties, even working on a screenplay together wherein the two play sisters. With the latter, Lawrence penned an essay on the Hollywood wage gap for Dunham’s Lenny Letter newsletter. (This, after the Sony hack revealed how much less she made than her male co-stars for American Hustle — a role for which she was nominated for an Oscar.) It was, in hindsight, a natural transition from the rhetoric she’d used in her previous Vanity Fair interview, going after another part of structural gender inequality within her world.

She gamely wrapped up her Mockingjay Part 2 press tour in high style, and began her Joy one, in which she wore even more muted looks. It was during this time that her most revealing interview ever dropped:

Throughout this Vogue profile, Lawrence is restless, resigned, and frank in a way that she’d never been before. A selection of quotes:

“No one ever asks me out. I am lonely every Saturday night. Guys are so mean to me. I know where it’s coming from, I know they’re trying to establish dominance, but it hurts my feelings. I’m just a girl who wants you to be nice to me. I am straight as an arrow. I feel like I need to meet a guy, with all due respect, who has been living in Baghdad for five years who has no idea who I am.”

Regarding her bedroom: “This is where the maaagic haaaappens. Literally zero magic has happened in here. Cheers to my hymen growing back!”

“I was raised a Republican, but I just can’t imagine supporting a party that doesn’t support women’s basic rights. It’s 2015 and gay people can get married and we think that we’ve come so far, so, yay! But have we? I don’t want to stay quiet about that stuff.”

All this leads up to her 2016 Oscars non-appearance. Notably, she attended both the main event and the Vanity Fair after-party with O. Russell.