This is Jennifer Lawrence’s most candid interview, ever 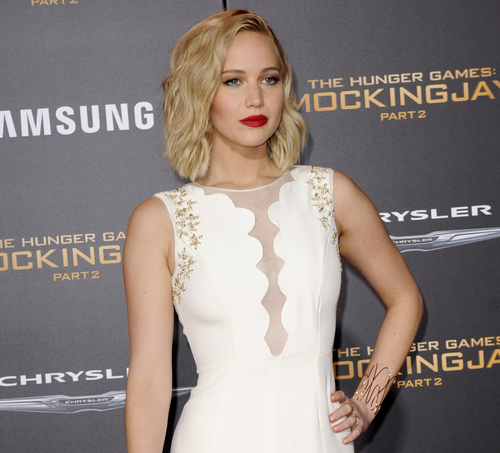 Jennifer Lawrence is the realest of the real. She surrounds herself with other real people, says real things, and partakes in real activities like tripping over herself and eating pizza. So when the February 2016 issue of Glamour hit shelves with J-Law on the cover, our hearts skipped a beat and we read every last word the relatable actress stated.

On the cover, Lawrence looks beyond stunning in a simple white dress, hair casually slicked back. But the best part is her extremely candid, blunt interview. It starts off with a recap of her last few years as an actress: leaving Kentucky for New York, learning to deal with the paparazzi, settling in as one of Hollywood’s leading ladies.

And when her style came up, she got super real super quickly about her figure.

“I’ve got tits and an ass. And there are things that are made for skinny people — like a lot of embroidery, or it covers a lot — and those make me look fat. I have to show the lumps. If you have boobs, you have to show, like, ‘These are boobs. This isn’t cellulite,’” Jennifer explained with a laugh. “Not that there’s anything wrong with that.”

She also spoke up about being the face of female-driven movies, like Joy and The Hunger Games, and the power that comes with being a strong female lead.

“As women we don’t know we’re at a deficit because we have vaginas,” the actress said. “I think there was this studio mentality for a long time that women and girls can relate to a male hero, but boys and men can’t relate to a female hero. But that’s simply not true. And so we’ve fortunately proved that.”

Of course, Jennifer’s famous Lenny Letter essay about the women’s pay gap and her own personal experiences with it in Hollywood is still top of mind.

She explained why she was compelled to share her story with the world, stating, “I completely agree when there are actors who say, ‘Actors should stay out of politics. We’re not politicians. But then what’s the point in having a voice at all if I’m not going to use it for what I truly believe in?”

But that wasn’t the only female topic that came up—Jennifer also spoke openly about her support of Planned Parenthood.

“What harm comes from supplying people with birth control, condoms, Pap smears, and cancer screenings?” she asked. “[The shooting at Planned Parenthood in November 2015] isn’t an attack on women. Because Planned Parenthood is so much more [than abortion].”

J-Law even opened up about the nude photo sex crime (photos of her were stolen and leaked online in 2014), and explained why it’s important to talk about it, not keep mum.

“If I was quiet, it would have seemed like I was ashamed. And I wasn’t ashamed; I was enraged. Not once have I felt like I ‘learned a lesson.’ I didn’t do anything wrong!” she exclaimed wisely. “It doesn’t matter what the situation is. It’s your body. And you can do whatever you want.”

Oh Jennifer, we love you so. Thank you for being so honest with us about the issues you care about and believe in. Read the full interview for more stories about her directorial debut, her Thanksgiving on Martha’s Vineyard with Diane Sawyer (NBD) and her girlmances with Amy Schumer, Emma Stone and Adele!