On Janelle Monáe’s birthday, I’m celebrating how her music and style helped me grow into who I am

Today is Janelle Monáe’s 32nd birthday, and I think the world needs to celebrate. Monáe, a singer/songwriter, actress, Cover Girl, and all around badass, she has inspired me — and many other Black girls — to explore themselves. She also taught us how to be fearless in a land that has thrived off the pain of people of color for centuries. Monáe’s quintessence is magical. I’m  honored to exist at the same time as her.

The very first time I saw Janelle Monáe was on BET. I was in middle school. Her music video for the retro — yet strikingly futuristic — track “Many Moons” was on, and I remember diving headfirst into obsession.

I had never seen anyone like her before. There was this timeless quality about her that stuck out in my mind.

At the time, I didn’t know that the magic I saw in her was in me too.

That discovery came a bit later.

By the time my freshman year of high school rolled around, I was playing with my sense of style and adapted Janelle’s old school hairstyle, the pompadour, as my own.

I was also honing my skills as a performer. It was common to see me making music during lunch and performing in school talent shows. Monáe was helping me become the creative performer I wanted to be. 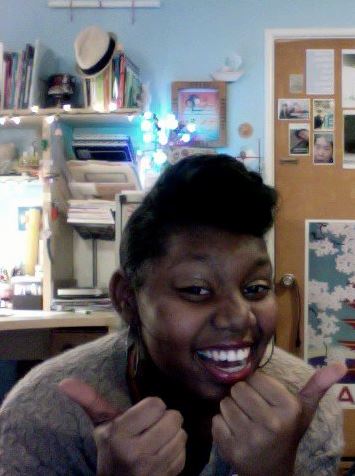 Sadly, life got rocky during my freshman year. My family lost our house around Christmas time. We stayed with a family member for a few months, but she soon decided it was no longer a good fit for her. We crashed around, sleeping at our church and in our car some nights.

By the summer, we were living in a homeless shelter. It was tough, being 15 years old and displaced. My mind, heart, and body were weighed down. I hadn’t experienced anything like it before, and I was struggling to cope.

Guess what saved my soul? Janelle Monáe’s The Archandroid album.

One of my best friends gifted me the radical LP towards the end of the school year. While in the homeless shelter, I would listen to it over and over until it was skipping out of control. Those days filled my summer with meaning.

I was encouraged by her lyrics: "I'm trying to find my peace" and "Whether you're high or low, you gotta tip on the tightrope."

I focused on rising above my circumstances and being a light. My grandparents allowed me to move in with them.

I continued to create music and art. The same friend who gave me Janelle Monáe’s sophomore project offered to help me record my own mixtape. We released it the following school year, and our peers were extremely supportive.

I’ve since kept on cultivating my own inner glow and I’ve released several more projects since then. The power of Black Girl Magic is undeniable.

Happy birthday, Janelle Monáe. You’ve helped me more than you will ever know.