Jane the Virgin is back! And we’re so happy, we feel like Rogelio when he’s getting *all* the social media attention.

If you haven’t watched the Jane the Virgin Season 4 premiere, “Chapter Sixty-Five,” now might be a good time to turn around because we caught up with creator and executive producer Jennie Snyder Urman about Jane’s flames ??. If you have watched, but want to proceed anyway because this sounds too juicy to resist, we totally get it — and trust us, this is juicy as hell.

In the Season 4 premiere of Jane the Virgin, Jane attempts to sort out her feelings for Rafael and eventually tries to make a move on him. But her feelings aren’t reciprocated and the pair end up having a major fight about Mateo. So needless to say, this will-they-won’t-they is very won’t-they — at least, for now.

On the flipside, upon realizing that she doesn’t want to be with Rafael, Jane renkindles her romance with first love Adam — whom she had previously been engaged to??!!! — after fate basically brought them together in the Season 3 finale. Obviously, a whole lot more goes down in the episode because, hello, Jane the Virgin draws from telenovelas.

BUT, we’re focusing on this little love triangle Jane seems to have gotten herself into. (Déjà vu, anyone?)

So, we caught up with Urman about the romantic highs we have to look forward to with Jane and Adam and where Jane and Rafael are at as potential romantic interests and co-parents following their blowout. And of course we asked about what role Michael will play as Jane learns to love again because A) we are human after all, and B) we’re still not over that bombshell.

HelloGiggles: What was your overall vision for this season? We saw Jane ending on an optimistic, romantic note in the Season 3 finale, and we definitely jump right into that. But how much will that play a role in Season 4, and what else is up ahead for Jane?

Jennie Snyder Urman:  That’s a lot of the theme of Season 4, is recapturing the joy, how to really live life with love and passion after such a significant loss. This season, that’s what we’ve been talking about a lot, that’s what Jane is going to be exploring in her relationship with Adam. Going forward, he’s going to be somebody that’s reminding her that she’s young, and that she has a lot of life left to live, and a lot of dreams yet to be fulfilled.

I think this season, we’re really going to be seeing a return to some of the big romantic highs that we had in the first season, in terms of just finding magical, romantic moments, and being really alive to the possibility of love and to one’s dreams coming true. This year has a lot of joy in it, which I’m excited about.

HG: How much of a role does Michael play as she learns to love again? 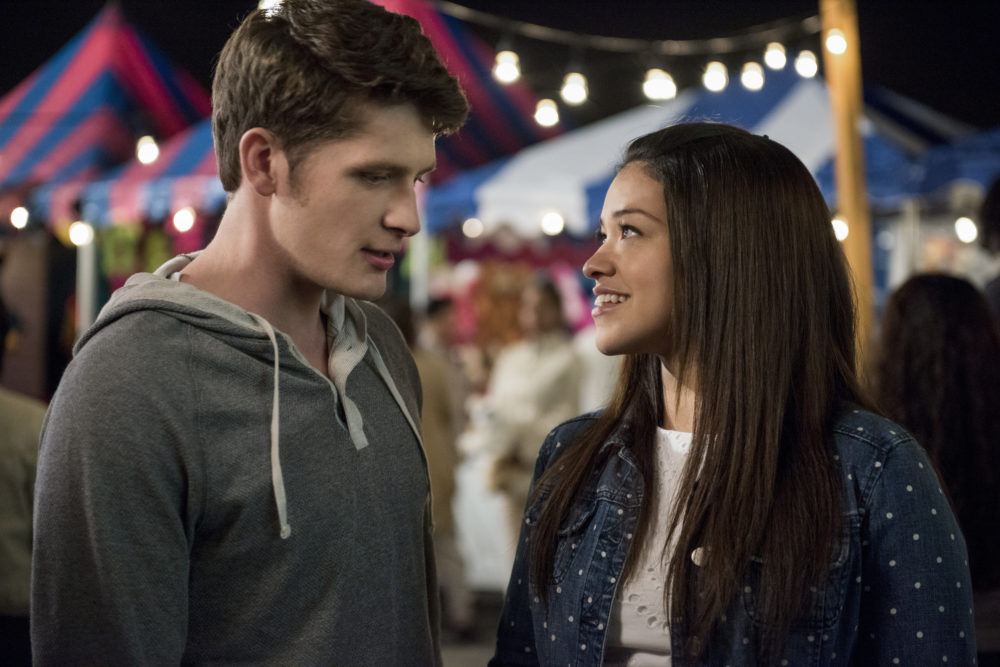 HG: You’ve said in the past that you like to bring Michael back when you can, but will we get flashbacks and little moments, like with Michael speaking to Jane as a photo? That sort of thing?

JSU: Yeah. He’s always felt, I think. And he’s felt specifically throughout the season, whether it’s somebody talking about him, whether it’s Jane’s book, which is being released, which is all about her love story with Michael. That obviously comes with a lot of flashbacks, a lot of memories, and a lot of how to move forward.

We explore her relationship with Michael’s mom a little bit, and how they have or haven’t kept in touch since his death. You feel Michael, I think, throughout. Also, how much fun can Jane have as a widow? Can she really let go and allow herself to be really, truly happy, and really, truly in love without feeling guilty about the fact that Michael’s not there? That’s something that she continues to grapple with.

You’re going to really feel Michael throughout the season. At the same time, you’ll feel him in different ways and in unexpected moments.

HG: Getting back to Adam, it was surprising to see that he and Jane were previously engaged. What was the creative choice behind that, and do Xo and Alba still have reason to be concerned that Jane doesn’t have her head on her shoulders around him? Or, do you think she’s matured and can handle herself?

JSU:  Well, that’s the question. Is he still a “not great influence on Jane,” or is he a fabulous influence on Jane because he reminds her that she’s young, and Jane could use a little reckless in her life?

That’s part of what the show grapples with, and her mom, her grandma, and Jane as well. The fact that they were engaged very, very briefly, is kind of a way to dramatize how he took her out of her comfort zone and her careful plans, and inspired her to want to do very un-Jane like things.

What I think is significant is that this is obviously a person who defines how she looks at love, how she feels about love, what it’s supposed to feel like, what it’s supposed to sound like. You find out her love cue [was written by Adam]. All of those things make Adam, when he returns, come with significance, and come with meaning. And it makes Jane re-explore what love feels like, how she looks at it, and how much of that came from that first relationship with Adam. 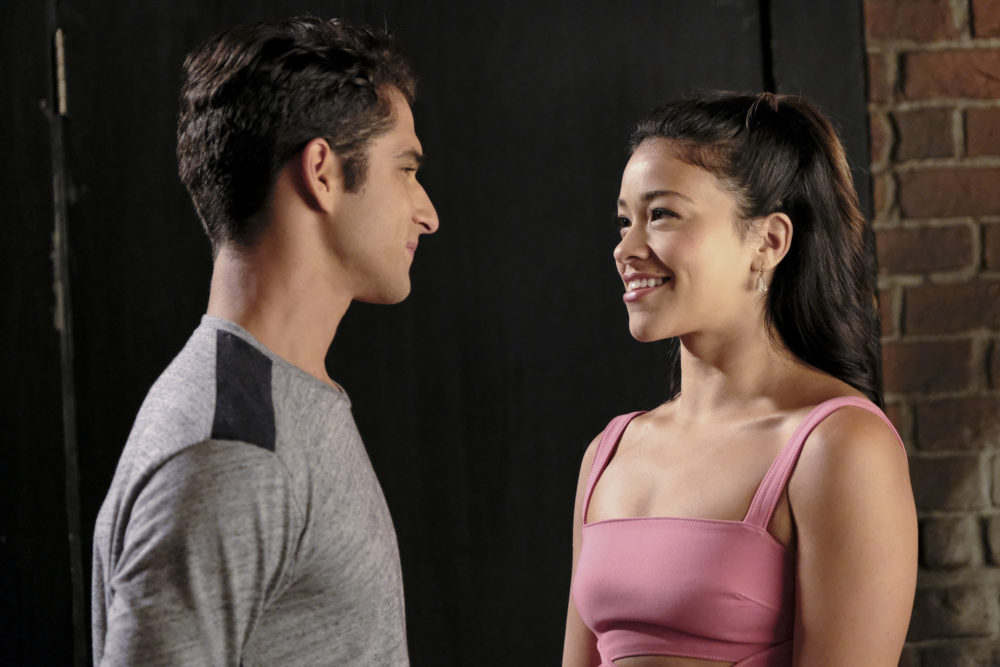 HG: Also interesting is that Adam has his own narrator. Why bring in this new narrator, and are we to assume that each character has a narrator of their own, but we’re just not hearing them because this is Jane’s story?

JSU: I think that’s fair. The idea was pitched to me in the room. We were trying to come up with how Adam can come into the story with enough significance that he’s going to be a person who is significant. At the same time, we couldn’t devote the whole episode to Jane and Adam, because she had to untangle her feelings for Rafael.

Part of it came from that, wanting to introduce him in a significant way, that let the audience know that he was going to play a big role going forward. Part of it is the theme of the episode, about how everyone’s the hero of their own story. We’ve been watching Jane’s story, [but] everybody she meets is in the middle of their own narrative.

When those two kind of crash together, you have to deal with what the person’s coming from, and where they are in their own story, in their own journey. It felt like a good way to do that. I think you could extrapolate that potentially, in this world, everyone has a narrator that you’re not seeing, but that this story is told through Jane’s.

HG: Will we hear from Adam’s narrator again, or is that exclusive to this episode?

JSU: We won’t. It was for the episode, and at the end of the episode our narrator says, “He’s part of our story now,” and kind of incorporates him into Jane’s narrative.

HG: Jane and Rafael getting back together looked really promising for a minute there. What would you say to fans of the pair who might be disappointed to see that this probably isn’t their time, considering their big fight, her renewed interest in Adam, and his love for Petra? And is there hope for them for down the line?

JSU: Of course there’s hope for down the line. Jane and Rafael will always be significant people to each other. The “will-they-won’t-they” of Jane and Rafael is something that we are exploring in a big way this year, with many twists and turns. We are going to be exploring a new facet of them early on, which is that ever since our time jump, they haven’t fought. They’ve been on pretty similar pages, and they’ve been supportive of one another.

When this really significant thing happens to Rafael, he loses all his money and he loses his hotel. It really shakes his sense of who he is and what he wants, and that puts a real significant strain on his relationship with Jane. He’s going to be living with her for the foreseeable future, so that puts them in close proximity, and creates a lot of opportunities for a lot of different moments between them. 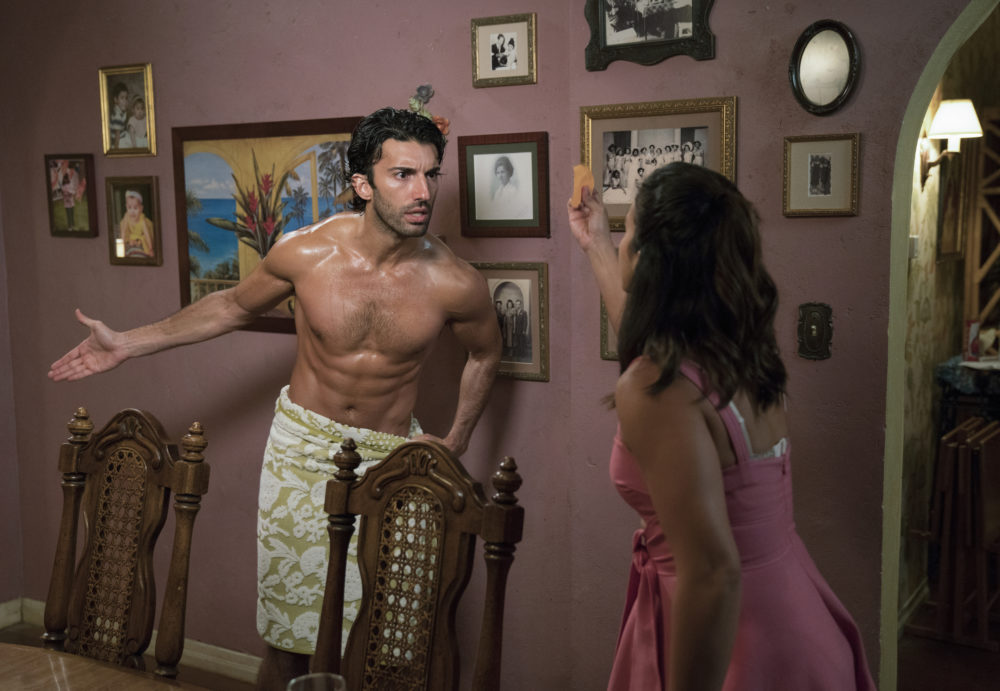 HG: How big would you say this blowout is? We haven’t really seen them fight since the time jump, like you said, but they are co-parents so, on some level, they have to sort of suck it up and get along.

JSU: You’ll see them trying to do all of that, trying to suck it up, trying to co-parent, making moves that either escalate or deescalate the situation, and then as we continue to explore it, different lines get crossed, and it becomes much more difficult to co-parent when they’re not on the same page, and when they’re not agreeing about really major and significant decisions and courses of action.

Jane the Virgin airs on Fridays on The CW.