Jameela Jamil refused to be airbrushed in her latest magazine cover shoot, and her reasons will make you cheer

If only everyone thought like Jameela Jamil does. In recent months, The Good Place actress has solidified herself as a body positive activist. Back in March, Jamil launched an Instagram account called “I Weigh” dedicated to promoting body positivty. The account shares photos of real people and lists their weight in terms of things other than a number on the scale. Jamil’s own “I Weigh” post lists her weight as a “lovely relationship,” “great friends,” and “financial independence.”

Now, Jamil is promoting body positivity in another way: by requesting that she not be airbrushed in her latest magazine cover shoot. Jamil appears on the June 2018 cover of Vera, Virgin Atlantic’s in-flight magazine, with absolutely no airbrushing. The actress says she requests not to be airbrushed often, but only sometimes gets her wish. But Vera agreed, and their photos of the airbrush-free Jamil are stunning.

Jamil shared the photos on Instagram, calling out her “squishy legs and normal 32 year old knees,” thankful they weren’t doctored in post-production. She also shared the pictures on Twitter, saying she’s grateful they didn’t “airbrush me or any of my squish.” Jamil received an outpouring of support for being so open about the photoshoot. She took to social media and her blog to elaborate, explaining the three main reasons why she thinks airbrushing is terrible.

"What message does it send to women (and men) everywhere, that a 'fantasy' female is normally only ever one who is impossibly long, and thin, with flawless (and normally lightened) skin, with a thin face, a small nose, large lips, big eyes, and no wrinkles ever, at any age," Jamil wrote on her blog. "Why can't the fantasy ever have some back fat? Or be in a wheelchair? Why can it never be unsymmetrical? Why can it never show the dignified and important lines of a life lived and survived? What is that one, constant, 'flawless,' doll like fantasy telling all normal women everywhere? That we are not to be fantasized about? We are excluded from the desirable group? We are the rejected? We didn’t make the cut?"

"There is no mention of alteration, so we are left with the manipulative subliminal messaging that someone else achieved the forever pre pubescent 'fantasy' but we can't. We have failed," she continued. "Her breasts have been plumped, her legs lengthened, her skin smoothed. But all in secret. It's so dangerous to put these images into the world of women who themselves often do not even meet the requirements, without the help of a computer, and say nothing of it. There should either be a detailed declaration in small print of the features altered, or we should see the original image and celebrate the humanity and reality of the subject and her photographer. Who frankly, may as well not bloody be there if a computer is doing all the work. Where is the dignity in it? For anyone involved?"

"To be airbrushed, which is never even discussed with you beforehand, is not a kind act. It's a passive aggressive attack. To see a simulation of myself, a 'flawless' version that I myself could never reach in reality, does not make me feel flattered," Jamil wrote. "It explicitly informs me that I was not good enough on that day. Or on any day. What I am, must be covered up, altered and hidden from sight, or else people shall find me harder to look at. When magazines have in the past altered my ethnic nose to look more caucusian and button like, or lightened my skin… I feel racially offended. When I see that my cellulite and stretch marks that I spend my every day with have been deleted, it makes me feel bad about myself when I see them in the mirror. A feeling I didn't want or need, which I then have to fight and dismiss in the name of feminism and basic bloody humanity. I am human. I have lived. I have been through a lot, and some of those things have marked me, and I do not feel shame about those things, I do not think someone else has the right to make me feel I should."

Jamil’s voice is so appreciated in this day and age. Maybe #SayNoToAirbrushing should be her next campaign?

And finally, Jamil shared one last message for her haters on her Instagram Story. 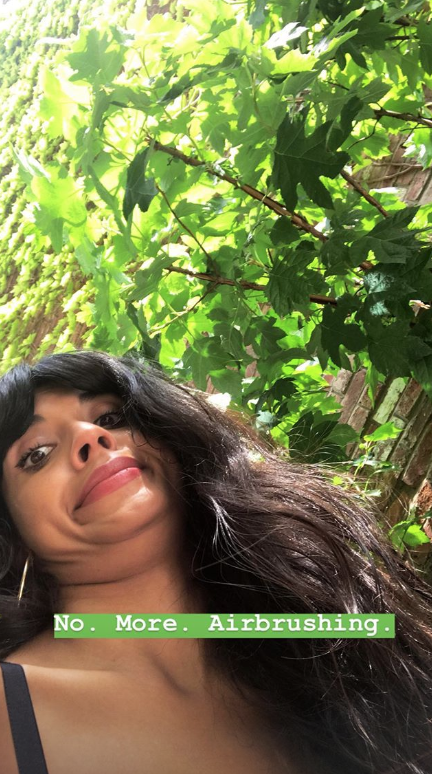