Jake Gyllenhaal and Ryan Reynolds’ new movie Life might be about as serious as you can get (killer aliens, hellooo), but off set, they’re a couple of jokesters.

As evidenced by this new press junket interview, Gyllenhaal and Reynolds can’t quite keep it together. The laughs start when the interviewer gifts the duo with Deadpool-themed tie pins — and since Reynolds is the one known for playing the character, his Life costar sees a hilarious opportunity that he can’t help but take.

“Thank you so much,” Gyllenhaal says, tossing his pin over his should as Reynolds bursts out laughing (Gyllenhaal, of course, picks it up and expresses his honest gratitude).

It’s only downhill (or rather uphill, in our opinion) from there, though, with the guys joking about how they sat in the wrong chairs for the interview even though they were labeled with their names.

They literally even clip the Deadpool tie clips to their ears like clip-on earrings, where if we didn’t know any better, we’d think they were coming fresh off a game of Girl Talk circa 1991.

To be fair, Reynolds is already obviously in a casual mood, judging by his (amazing) Hawaiian shirt, so this interviewer should’ve maybe known what was coming. 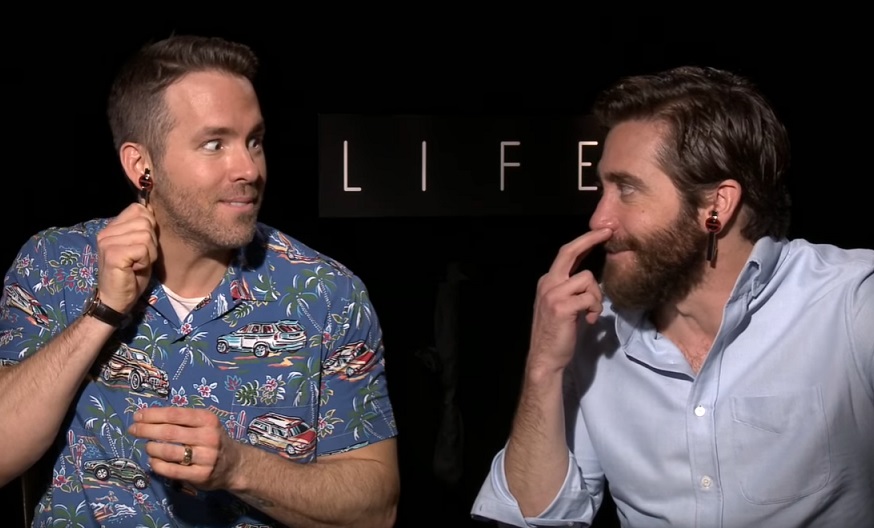 Reynolds and Gyllenhaal then start talking about a “big one-er,” meaning one long single shot in the movie — but of course, the not-entirely-mature shenanigans continue with a double entendre the actors can’t ignore.

"It's also pillow talk with my wife," Reynolds alternatively defines the term. (We wonder what Blake Lively has to say about that!)

Check out the full 5-minute clip below. We dare you not to giggle at the jokes, the blatant ludicrousness, or both — especially when the guys start laughing so much they’re basically crying.

We’ll be the first ones in line to see Life when it premieres Friday, and if we get too scared, we’ll just think back on this incredible interview and hope our giggles stay internal as not to weird out our fellow theater patrons.