Jackson’s back for “Gilmore Girls” without Sookie — what does this mean??

One of the last remaining Gilmore Girls cast members has finally confirmed that he’ll be returning for the revival. Earlier today, Jackson Douglas, who played Jackson Belleville on the show, tweeted out that he had received his script, and he was ready to head back to Stars Hollow.

So go ahead, and put a giant check mark next to his name on the big Gilmore Girls tracking board you (probably) have in your living room, which is really just your vision board full of all your hopes and dreams for the revival. Then pause for a second, and stare at the last remaining GG holdout, who has been invited back, but says she wasn’t invited back, and it’s breaking our hearts: Melissa McCarthy.

With Douglas’ plans to return to the show, it’s hard NOT to think about Sookie St. James. She and Jackson were married and had two kids — a third on the way last time we saw them. With Douglas now set to return, what does this mean for Sookie?

Original Gilmore Girls creator and returning showrunner, Amy Sherman-Palladino, has stated that Sookie’s absence will be explained, because unless her schedule is suddenly completely empty and she surprises us at the last second, McCarthy will not be back (pause to cry for a few minutes). Here’s are just a few ways her MIA status could be explained:

Always trying to expand her baking skills, Sookie applies for, and is accepted, into some major program overseas. Seeing this as a great opportunity, she packs her bags, and leaves Jackson behind with the kids, promising to return as soon as she’s a master pastry chef. 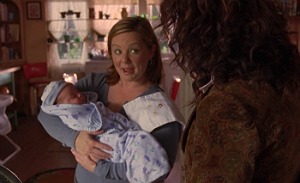 With her kids quickly growing up, and knowing how hard it is to get into college these days, Sookie decides to take her oldest, Davey, out on the road to look at schools. Sure, he might only be 13, but it’s never too early to start.

Sookie and Lorelai had a falling out

…and the entire four-episode Gilmore Girls season is about the two of them trying to get back together and rekindle their friendship, and it all culminates in one giant reunion for the finale, and this would actually be okay.

She’s there, but we just never see her!

Gilmore Girls is going to commit to a long-running gag, where Sookie is mentioned, and talked about, and ~appears~ to be in the house/Stars Hollow this entire time, but we never see her. So Lorelai will be like, “Hey were did Sookie just go?” and Jackson will be like “Oh darn, you just missed her!”

In a huge twist, it’s revealed that Sookie has actually been dead for 25 years, and has been haunting Stars Hollow this entire time. So she’s always there. She hasn’t gone anywhere, and she’s never going to.