Ivanka Trump changed her Twitter bio to be less feminist, and yeah, the internet noticed

Ivanka Trump is stirring up controversy again, and this time because of her Twitter bio (really). Ivanka has long claimed to be a champion of women but never sticks her neck out for us when it comes to her father and his overtly sexist, anti-women statements and policies. While Trump slashed Obama-era legislation like the ACA’s free birth control mandate, and when the White House made its official position on the women accusing the president of sexual misconduct as “fake news” — Ivanka was noticeably silent.

On January 22nd, 2018, Ivanka changed her Twitter bio to remove the portion where she called herself “an advocate for the education and empowerment of women & girls,” and the internet reacted. Trump’s Twitter bio originally read:

“Wife, mother, sister, daughter. Entrepreneur & advocate for the education and empowerment of women & girls. This is my personal page. Views expressed are my own.”

The timing is interesting because she made the change just two days after the 2018 Women’s March. Trump also failed to speak out or make any statement about the actual Women’s March, which is also fascinating, seeing as she once allegedly cared about our empowerment. 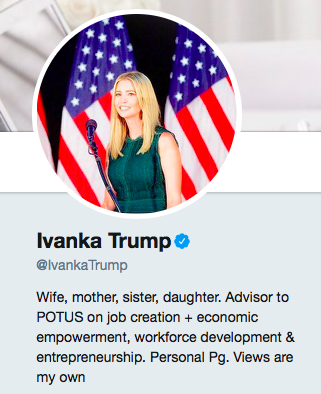 Here’s the thing: People aren’t necessarily upset that she no longer has the “entrepreneur & advocate for the education and empowerment of women & girls” clause in her Twitter bio because nobody really saw her as a feminist ally to begin with. The general reaction from Twitter was more like “ugh” and also “sounds about right.”

Having that “women and girls” clause in the first place was almost a slap in the face to the actual women and girls she rarely advocated for. Whatever glimmer of hope we had that she could be a feminist agent of change from within the White House is all but gone now, but to echo the many Twitter voices, at least she’s being honest now.