The Internet can be a wonderful and surprising place capable of so many amazing things. It can connect people across the globe, answer almost any question in a matter of a Google search, and, of course, it’s always good for a laugh — thanks to the abundance of cute cat videos and Joe Biden memes you’ll find there.

But there’s also a dark side to the Internet, one where hatred is easily shared and spread, and navigating that troll-infested territory can feel like walking across a field of landmines in the shape of an online comments section — especially if you’re a woman. 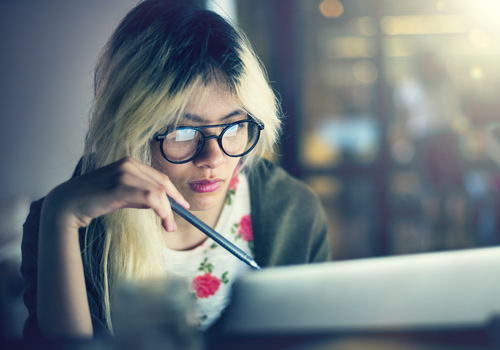 As an online feminist writer, I’ve been at the blunt end of internet bullying, and I can tell you one thing is for certain:

It doesn’t make you any stronger, but it can remind you of how strong you already are.

The Internet is a great forum for conversation and open discussion, one where every contributor feels like they have an equal say and a true opportunity to make their voices heard. Whether it’s in the comments section of a website, a conversation on Twitter, or in a chat room, the online world starts as an even playing field for everyone who logs on — the only problem is, it doesn’t stay that way for very long. Internet bullies — aka trolls — use the Internet as a place to spread hate, to instigate arguments, to stir the pot and work people up for their own entertainment.

It doesn’t take long after the trolls crawl out from under their bridges for this safe space that was intended for everyone to become a dangerous battlefield where no one and nothing is off limits.

Online bullies take many different shapes and forms. They appear in the comments section of websites to yell at and make fun of writers and readers alike. They show up in your inbox with hateful messages and personal insults tailored especially for you. They arrive in the form of Twitter notifications and Facebook messages to let you — and the rest of the online community — know exactly how the haters feel.

They never show up in your real life, but when these nasty little trolls seep into every part of your Internet life, it feels like they're all around you, suffocating you with constant reminders of all the ways you aren't good enough, smart enough, or pretty enough. They become a constant whisper in your ear, one that says "you're voice isn't worth being heard."

When you’re a woman, so much of the online bullying you find yourself the victim of is a direct result of your gender. The Internet has become one of the greatest weapons against women, a place where misogyny thrives and harassment is as simple as clicking a few keys.

I experienced my first dose of public online bullying within just a few weeks of beginning my career as an online writer.

After doing a round-up of feminist-centered fiction books, I received messages on my social media accounts telling me I was stupid, trying to convince me that feminism was dangerous, and blatantly insulting not just my beliefs about gender equality, but insulting me as a woman, as a person. Since then, I’ve been harassed and insulted more times than I can count. I’ve been called derogatory names, threatened physically and sexually, and even told to “go die alone already.”

I’ve received and read hateful comments from all the trolls you’d expect — the misogynistic ones, the sexist ones, the bored ones who just want to spew hate to anyone who will listen . But it was the comments from the people I didn’t expect that really touched a nerve:

Messages from women saying I must be ugly, because all feminists were really just angry that they couldn’t get a guy; comments from women expressing that I was the reason people hated our gender; notes from girls saying feminism sucked the fun out of everything, that I needed to “give it up and get married” already. This bullying, from women no less, is the bullying that keeps me up at night. This is the bullying that makes me cry harder than the words from angry men who love telling me how worthless I am. It all hurts, but something about vitriol from other women cuts just a little bit deeper.

There’s no getting around it: Internet bullies suck in every form, and to deal with them as writers — or more simply, as people who communicate online — we have to find the strength within ourselves not to ignore it, but to overcome it.

And this is where things get complicated.

]I’ve read essays about internet trolling before, and a common theme in a lot of them is this idea that the experience makes the writer stronger, that it helps them grow a thicker skin. While the sentiment is a nice one — what doesn’t kill you makes you stronger, stand a little taller… you know the Kelly Clarkson lyrics — it gives credit to the wrong person.

Internet bullies, bullies of any kind, don’t make us stronger — rather, they reveal to us a strength we already have.

We use the power we have within ourselves to overcome hate, to move on from nasty criticism, to grow from the hurt, and that power isn’t something given to us by the jerks with overactive Twitter accounts. It’s a power we own, one we conjure through our own inner strength and — when that is not enough — the inner strength of the supportive community around us.

We need to stop thanking those who try and tear us down for showing us our resilience. We need to stop giving praise to the hate that shows us how strong our love is. We need to stop crediting the evil for bringing out the good, especially now, during a time when our country’s future is in the hands of one of world’s biggest Internet bullies.

It isn’t the world’s trolls who will move us forward, but the worlds hopeful and hardworking people who refuse to give into it.

It’s time we stop thanking Internet bullies, or any kind of bully, for making us tougher — and start recognizing how strong we already are. We don’t need hate to keep us moving, to keep us fighting or keep us writing — we need hope, and we need strength, two things that have been there all along, just waiting for us to find them.