While we love and adore Instagram (clearly), we’ve always wondered why the app only lets people log into one account, especially since every other social media app lets people toggle between their personal account, and, say, a fan page, professional page, or joke page. But, it seems as though a few lucky users have stumbled upon the app’s next update — none other than the ability to switch between accounts seamlessly. 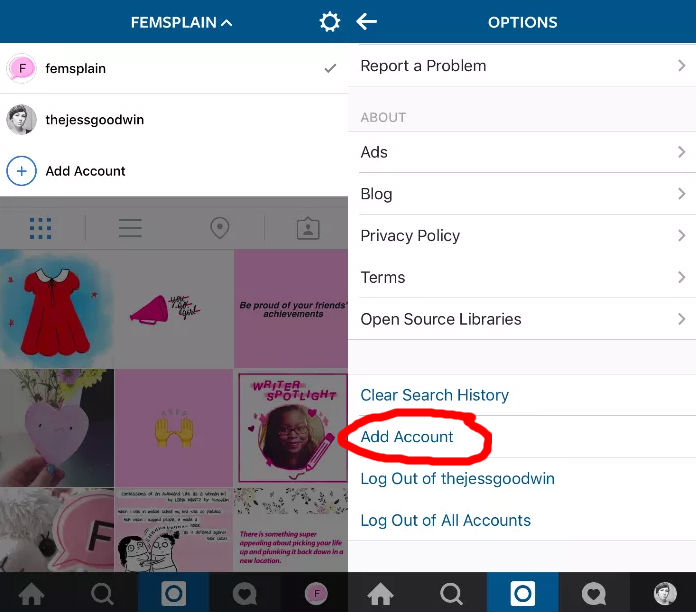 Jess Goodwin, a longtime HelloGiggles contributor and also an editor at our BFF site Femsplain, was alerted to this tweet by Latergramme app team member Taylor Loren. Curious, she checked her own account at around 5:30pm EST and noticed that she had a new “Add Account” option on her Settings page. Goodwin, an iOS user who toggles between her account and Femsplain’s regularly, tried the option out, and found that she could now seamlessly switch between the two.

According to Latergramme’s blog, Instagram’s been testing out this feature on a small pool of Android users; it looks like the app’s finally taking into account their majority Apple-using population, so it’s only a matter of time before this feature rolls out for everyone.

Why would anyone need to be switching out of accounts all the time anyway? For social media managers who are posting regularly for a brand or an outlet, this ensures that they’ll never make the accidental, dreaded, “personal post on the professional account” mistake. It also allows people who forget passwords regularly to never have a reason to log out. In general, it’s just cool that Instagram finally followed through on what is probably one of the most-requested features; now, we’ll just be checking Instagram even more to see when/if we get this new update.

Get ready, because this new Instagram app is a total game changer