The 10 most inspiring Harry Potter women

Harry Potter may be a boy’s story, but it’s definitely not a man’s world. Author JK Rowling has created a universe brimming with girl power, from the smallest creatures to the largest. Here’s a list of some of our favorite ladies from the Wizarding World, and why they inspire us so dang much. 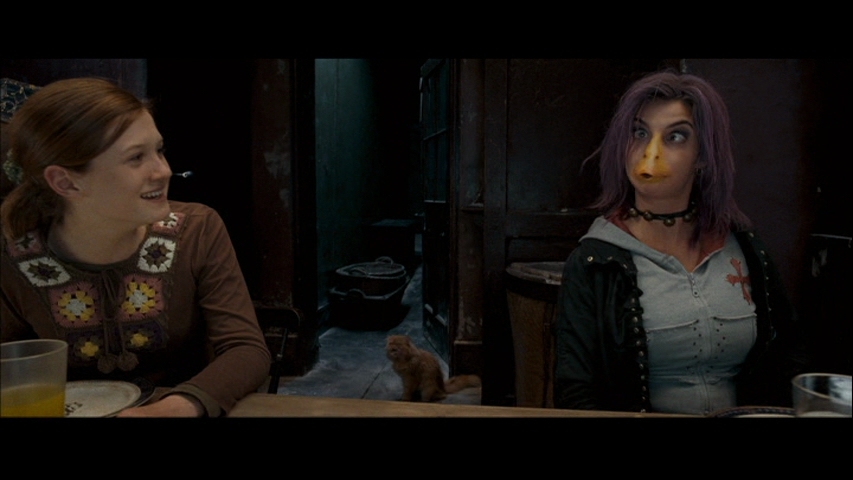 Bubble-gum haired, shape-shifting Tonks has got to be one of my personal favorite literary characters of all time. Over the course of her short life, this talented Hufflepuff extends an amazing amount of hospitality and joy to everyone around her. She adds a spark of light in whatever room she’s in, and her heart for camaraderie and her sisterly affection to Harry and his pals basically just make us want to be better people immediately.

Mostly, Tonks is amazing because she follows her heart and doesn’t let people tell her what to do. No, not Nymphadora, it’s Tonks, she insists. She doesn’t take “No” for an answer when Lupin tries to protect her from falling in love with him. In the end, she sacrifices her life for her friends – and so that her son can grow up in a world free of Voldemort’s evil. Talk about inspiring.

Fleur, the part-Veelah Triwizard Champion from Beauxbatons, is at first striking for her beauty and charm. But she emerges very swiftly as one of the most loyal and brave characters we meet in the Wizarding world. While she doesn’t always perform as well as her competitors in the difficult Triwizard Tournament, she meets every challenge with determination, and along the way we get to know her huge, compassionate heart.

Who can forget her heart-wrenching cries of gratitude when Harry rescued her little sister from the lake in the Second Task of the tournament? Was anything more adorable than her unending loyalty to Harry from that moment on? Wasn’t her unflinching affection for Bill, even after his disfiguring werewolf attack, the moment we all thought #relationshipgoals?

Proud and beautiful Fleur was never content to be gawked at. She helped the Order of the Pheonix time and time again, from opening her home to members of the Order, to fighting in battles, and even putting herself in unimaginable danger by taking polyjuice potion to look like Harry during a deadly mission.

At first glance, it might seem that Cho Chang doesn’t have much of a role in the Harry Potter books other than as Harry’s first crush. But when you look a little deeper, this lady is a mega role-model type. She has to deal with not only her boyfriend being murdered, but the insane danger and complications that her sort-of-boyfriend Harry carries with him. There are a few memorable scenes where Cho gets weepy, but Hermione perfectly explains it in The Order of the Pheonix:

Talk about a lot for a 16 year old to handle! And the amazing thing about Cho is that she shoulders it with grace and kindness. She’s always gentle with Harry, even when she has to let him down. She refuses to ridicule Harry when other groups in the school decide to mock him, and she remains a faithful soldier in Dumbledore’s Army, even after she and Harry break up. She may have dealt with a ton of insecurity and jealousy— but don’t we all? Even through the rough times, Cho never gives up her convictions, and we love her for it.

I know, I know…a Malfoy making it onto this list? The snobbiest, death-eater-est name in the whole wizarding world? But listen – Narcissa, while a mixed bag, is totally one of the heroes of the Battle of Hogwarts.

Imagine being raised from a baby to be snooty about your blood-status. Imagine marrying somebody even snobbier and racist than your family. Imagine being surrounded by death-eaters and warmongers your entire existence. That’s Narcissa’s life. Honestly, we don’t know much about what Narcissa was like as a kid, or a student, or even a wife. But we do know that, as a mother, her priorities are clear. She cares for the safety and well-being of her family way more than she believes in anything Lord Voldemort—or anybody else—has to say.

Narcissa might be nasty and racist (after all, she was trained to be that way) but when the moment of truth came, she valued the importance of her son’s life over Voldemort’s mission, and she saved Harry Potter when she could easily have outed him to the dark forces. And for that we say, Bravo ‘Cissy. 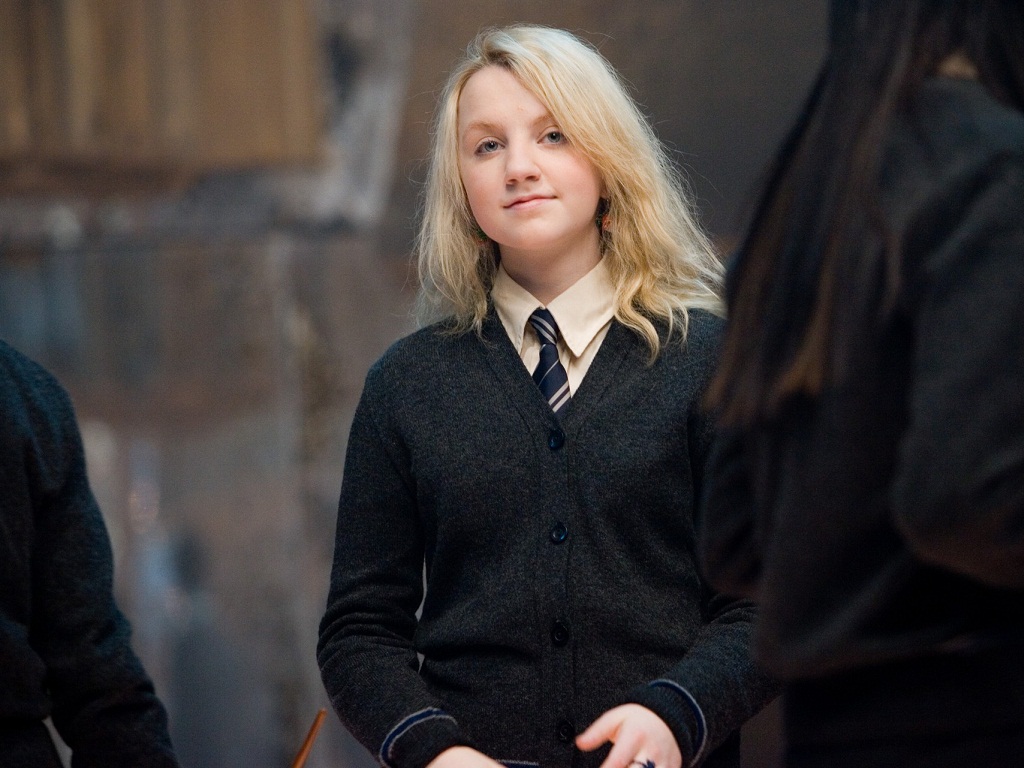 When we meet Luna in The Order of the Pheonix, our hearts are pretty much immediately stolen by this coolest of the uncool kids. Luna is kind when others are suspicious. She reads what she wants to, thinks what she wants to, lets her imagination run wild, and never once makes fun of another student for disagreeing with her. Her unorthodox way of thinking saves the day more than once, and is matched only by her fabulously unorthodox fashion sense.

Luna’s place on this list is one of kindness, compassion, and fearless individuality. Her brutal honesty is disarming, but is something Harry desperately needs in his life when he happens to befriend Luna. Her faith and persistent good spirits serve to remind us that the world is beautiful and fascinating, no matter how dark it might seem!

Ginny is the perfect reminder that just because you’re small and outnumbered, doesn’t mean you can’t be a fighter and a winner. The only girl, and youngest kid, in a loud, full household, Ginny always exhibited a stirring amount of independence and tenderness. She’s never afraid to question her big brothers when she thinks they’re up to no good, but she also knows how to play rough when the time comes.

From her insistence that she has the right to date whoever she wants, to her sassy reminder to Harry that he should have asked her opinion about fighting Voldemort, since she was under his powers during her first year, this young member of Dumbledore’s Army is definitely our girl-crush. Who can blame Harry for falling head-over-heels, right?

We’ve given Narcissa her dues for being a devoted Mom, but she doesn’t hold a candle to Mrs. Weasley, the ultimate wizardly matriarch! Molly is no-nonsense, brimming with life and energy, and so full of love for her seven children that their quirky house is almost full to bursting with it. She cares for her kids, knitting them annual sweaters, packing them lunches, and sending them howlers when they step out of line. She steadfastly supports and loves her husband Arthur, even when he drives her nuts with his enchanted Muggle objects and his dangerous work in the Ministry.

Maybe the most inspiring aspect of Mrs. Weasley is that she truly feels like our mother, not just Ron’s. She welcomes us all into her home when she welcomes Harry, and her practicality and good humor even in the midst of hard times makes her not only beloved, but a role model for us. We know Molly is always watching her magical clock, waiting for us to get home safe. And we know she’s not afraid to pull out the big guns (or wands!) to protect us against anyone who has the gumption to threaten our safety. 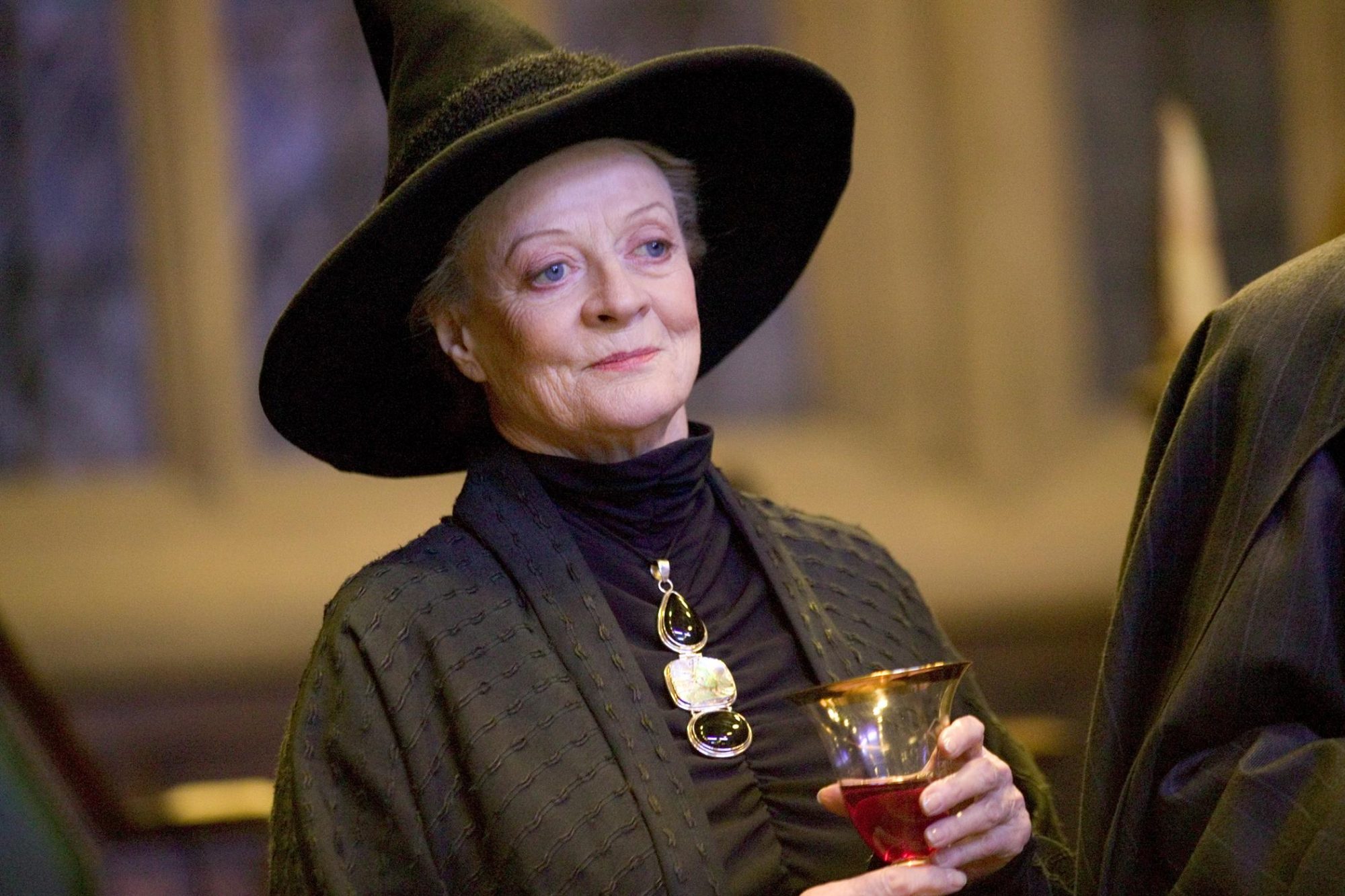 Getting to know Professor McGonagall is one of the greatest privileges a reader can have. At first, with her severe countenance and strict adherence to rules, she seems like maybe just another uptight professor who’s out to ruin everyone’s fun. But from the moment she made Harry the Gryffindor Seeker (instead of writing him up for detention, like he totally deserved) we knew McGonagall was more than her stern spectacles. She’s competitive and proud, but not afraid to shed a tear or speak comfort. She respects the rules, but she knows just when to break them too.

She’s loyal, hardworking, and has seriously mastered the art of restraint. And whether she’s nose-to-nose against Dolores Umbridge or commanding troops in the battle of Hogwarts, she’s one feisty witch we can’t help rooting for.

Hermione is so perfectly imperfect. Unquestionably annoying, insufferably a know-it-all, and prone to silly crushes (Gilderoy Lockhart, anyone?), Hermione still manages to grow into the most caring, resourceful, and compassionate character perhaps in the entirety of the series. She doesn’t just fight for her friends – she fights for what’s right. She knows her strengths and she hones them – understanding that her knowledge and skills will be invaluable in defeating Voldemort. Perhaps because she is muggle-born in a wizarding world, she’s got this innate instinct to overcompensate, over-work, and over-prepare, sometimes causing her to be out of touch and proud. But, warts and all, Hermione is who she is and knows she’s got something to say.

Her unpopular SPEW (Society for the Promotion of Elfish Welfare) campaign, sadly untouched by the films, might be the crux of the entire series. Hermione, just one small child thrust into a new world, learns that it isn’t all magic. She discovers that even worlds with Unicorns and love potions can be built on suffering, class warfare, and intense racial strife. And she won’t let even her own beloved school off the hook when it comes to defending freedom and justice for all. If even the smallest, quietest creatures aren’t being given dignity, Hermione shows us, we’ve still got a long way to go.

We never get to meet Lily Potter, not really, since the series begins 10 years after her death. We glimpse her in moving photographs. She waves at us through the mysterious Mirror of Erised. She is recounted in the memories of others. And, of course, she stares at us through her son Harry’s bright green eyes.

So why does she fall to the top spot on our list? Because Lily represents the intangible, but utterly unbreakable, power of love. You can’t see it, touch it, hear it, or smell it. But it protects, preserves, and upholds – just like she protected Harry that tragic night when Voldemort attacked their home at Godric’s Hollow. Lily wasn’t supposed to die; Harry was. But her sacrifice, taking the spell in place of her baby boy, not only saved Harry, it all-but obliterated the Dark Lord. The power of her actions mystified the wizarding world for years, and still there’s no way to fully explain or understand it.

We don’t get to know Lily’s mind the way we get to know Harry’s. But we know she was always full of love, even as a small child befriending the standoffish young Severus Snape. She was independent and brave, sorted into Gryffindor and befriending teachers and students alike. She fought for freedom and equality, even when her world began to splinter and she was betrayed by friend after friend. In the end, she placed her love, trust, and hope in little Harry to set right what had been made wrong. She threw herself in front of death, and in so doing, saved the world.

Feeling inspired yet? We love returning to Harry Potter again and again to learn how to be brave, loyal, wise, and shrewd. What’s even more exciting? We can’t wait for each new generation of girls out there to read about Hermione, Lily, Molly, and the others, and make the world an even more incredible place.

(All images via Universal Pictures)