I tried using vegan condoms. Here’s how they measured up

Turns out, the average white, swole, protein shake-guzzling dude reacts to vegan condoms exactly how you’d expect him to.

When I told the guy I was seeing that I needed him to test out vegan condoms with me, his first reaction was, “How is it vegan? Do you eat it after?”

While Sustain Natural condoms are not edible, they are certified by the Vegan Awareness Foundation and free of casein, the animal by-product that is found in most condoms on the market. This animal by-product can cause irritation in men and women, and sometimes people who think they have latex-irritation are simply reacting to the casein in condoms. Sustain condoms are also Fair Trade, nitrosamine free, non-GMO, gluten-free, and made from natural latex.

“We essentially have every certification possible and we consider ourselves to have the most sustainable condoms in the world,” says Meika Hollander, Co-Founder and CEO of Sustain Natural.

While I don’t have any notable irritation from regular condoms, I’ve slowly been creeping further and further towards a fully vegan diet in the past few years, so I wanted to give vegan condoms a try.

Sustain also creates menstrual cups, lubricant, tampons, and more. They were founded by a father-daughter duo who set out to supply vegan sexual health products to those who have chosen to go vegan in their diet and consumption habits.

When I asked around to see if any of my friends had tried Sustain’s condoms, I got mixed reviews.

“My girl hates ’em, they get dry,” said Junior, 31. He also mentioned that they were kind of tight and he wouldn’t recommend them for longer sex sessions because of their tendency to dry out.

When I asked him why he purchased vegan condoms in the first place, he said he liked that they shipped directly to his house, but also that he “wanted to treat [his girl’s body] right.”

Twenty-six-year-old Jess, on the other hand, told me she “definitely would recommend” Sustain’s condoms. “They are thin and don’t have that terrible latex smell,” she said. “They could be a little more lubed IMO, but still way better than most condoms.”

Jess, like Junior, isn’t vegan, but she was “tired of the nasty latex smell,” wanted a thinner condom option, and doesn’t particularly like condoms. After continually seeing ads for Sustain and hearing good feedback from her friends, she decided to try them out.

Unfortunately, my experience with Sustain was a little more like Junior’s experience. In fact, out first try with vegan condom threw such a wrench in my sexual “routine” with my partner that we couldn’t finish the act. To be fair, though, my partner and I don’t normally use condoms, so the transition from no condom to condom was jarring. But I’d also made the mistake of having him try out the standard “ultra thin” condoms with me first, even though I knew my partner was on the larger side and probably needed the “large comfort fit” option instead.

When I asked him if the condom was too tight, he explained that all condoms were tight on him other than Magnums. (I’ve heard this from guys before, but this guy’s size actually warrants it. BTW, I’m not trying to brag. Bigger isn’t always better, in my humble opinion).

Since my partner’s size was definitely a factor in our failure with that first vegan condom, we tried the “large comfort fit” condom for our next foray (and no, this was not all done in one day). Hollander also informed me that they recently came out with an even larger size—their XL condoms–which are similar in fit to a Magnum condom (otherwise known as the go-to condoms for men who claim to be “above average” in size). 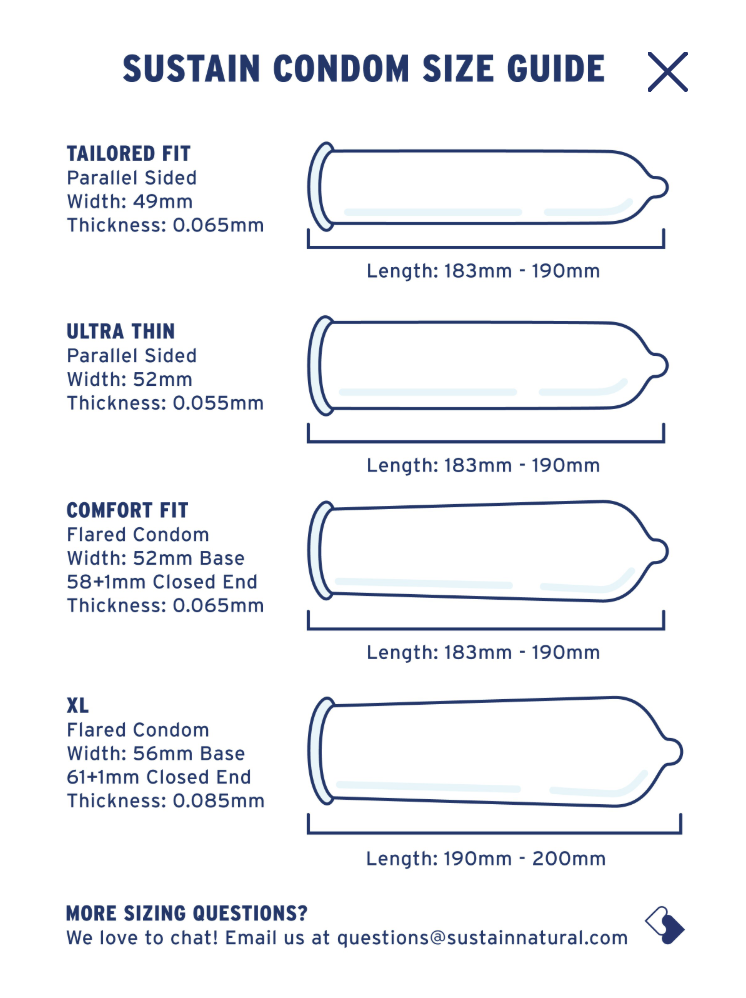 Using the larger variation of the condom was much, much better. My partner said it fit him better, but he still felt that he wasn’t getting as much sensation while wearing it compared to other condoms he has used. He told me that he also noticed a strong latex smell and felt some strange sensations from the condom—something he described as numbing yet tingling.

I definitely felt the numbing too—but again, I wasn’t sure if it was truly the specific condom’s fault or simply the fact that condoms do naturally dull some of the feelings and I hadn’t used any type of condom in about nine months.

In terms of the smell, though, that’s just a side effect of being more natural. “Some condoms manufacturers, in order to ensure that there is absolutely no risk of odor, use an odor masking chemical,” explained Hollander. “This may present health risks for the workers producing them.”

Sustain’s choice to keep their workers safe is a noble one, and I personally didn’t really notice the stronger scent until my partner pointed it out to me and had me literally smell the condom to confirm it. So I wouldn’t necessarily worry about the scent unless you’re planning to perform oral sex. Plus, Jess mentioned to me that she actually found Sustain condoms to have a less noticeable scent than traditional condoms.

At the end of the day, condoms come down to personal preference.

Not to mention that, no matter what the advertisements say, no condom is ever going to feel the same as condom-less sex, so you should prioritize safety over perfect sensation. The feeling of condom-less sex for nine minutes (that’s the average length of penetrative sex for heterosexual couples) is not worth a potential issue you’ll have to deal with for weeks, months, or even for the rest of your life.

As a wise man once said, “safe sex is great sex, better wear a latex.”

You should always be protecting yourself, even if you’re using another form of birth control. And you should always get tested before (and after) sleeping with a new partner. In the meantime, if you’re looking to go vegan in more areas of your life other than your fridge, or if you’re trying to treat your girl “right” like Junior, vegan condoms aren’t too shabby.