Before Donald Trump was elected president, there were signs that the United States was progressing towards greater freedoms and protections for LGBTQIA+ Americans. In 2011, President Barack Obama ended the homophobic and transphobic “Don’t Ask, Don’t Tell” policy that had stopped over two million people from serving openly in the military. Towards the end of his presidency, Obama also commuted the sentence of former intelligence analyst and army soldier, Chelsea Manning. Manning was initially sentenced to 35 years in prison for violating the Espionage Act, amongst other offenses, but instead only served seven years. An open trans woman, Manning was released on May 22nd, 2017 – the International Day Against Homophobia And Transphobia.

Trump’s decision to ban transgender service members is a regressive move that is deeply upsetting for the LGBTQIA+ community, returning us to a time when we had to hide in fear of losing our jobs.

He is inciting a culture war and attacking the transgender community as a whole, a community he said he would protect as president. In three tweets, Trump announced this ban, citing that medical costs for transgender people in the military would be disruptive despite these costs amounting to no more than a small fraction of a colossal budget – between $2.4 million and $8.4 million which is only a 0.13 percent increase in healthcare spending. (Not to mention, the military would spend FIVE TIMES as much money on Viagra than it would on trans health care).

When the supposed leader of the free world makes a direct attack on a marginalized community, especially after their predecessor has set a new progressive precedent, it demonstrates that the current administration governs with oppressive ideology. Moving backwards to a time when government took such a harsh position is unnerving, given that LGBTQA+ people, especially transgender people, face significant discrimination in the workplace and beyond.

If the government that swears to protect you doesn’t believe you should share the same rights and freedoms as others then how can you expect to feel safe? 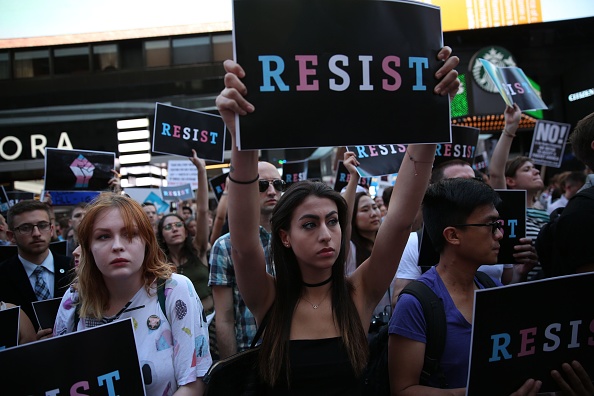 There is no new rationale, let alone data or studies, to support Trump’s claims that transgender people will disrupt the overall aims of the military. He is making decisions that will have severe consequences for transgender people solely on the basis of discrimination. As countries around the world are making progress in the fight for transgender rights — Canada introduced Bill C-16 that adds gender identity and expression to their human rights code and the UK has moved to allow trans people to change their sex legally without medical diagnosis — the United States is now headed in the opposite direction.

I want to see governments worldwide work towards equality for transgender and nonbinary people by implementing employment programs, instead of taking our jobs away. I want to see legislation passed that protects us from workplace discrimination and celebrates our contributions to society, instead of treating us as a burden and rendering us incapable of participating.

I want Republican political leaders that promise to be pro-LGBTQIA+ to follow through, instead of launching assaults on us.

Whether or not transgender people can serve in the military isn’t even the most troubling issue at hand — it’s the notion that a government will take away rights (that have already been granted) on the basis of opinion instead of fact.

The United States government prides itself on setting an example to others, but is currently demonstrating that human rights are contestable. The government is saying certain demographics are unfit to participate in the workforce due to who they are. It’s a terrifying prospect to consider, and one that I don’t want to think about for long. Fortunately, the ACLU is already moving to challenge this ban, and hopefully, we will see some action taken soon.

Until then, I hope that opposition to Trump’s ban remains strong.