I’d be lying if I denied the fact that when I first heard the basic concept for the Reebok’s #PerfectNever campaign, I wasn’t fully convinced. It’s not because I am someone married to perfection (one time I wore a t-shirt inside out to a job interview), or even because Reebok picked the supermodel Gigi Hadid as their front-woman for the campaign, it was more because the recent trend of brands using feminism and empowerment to sell products doesn’t sit well with me.

On one hand, if you’re going to sell products, why not employ uplifting and positive rhetoric rather than manipulating women by feeding their insecurities?! It only makes sense to marry the promotion of a brand with the promotion of self-esteem. 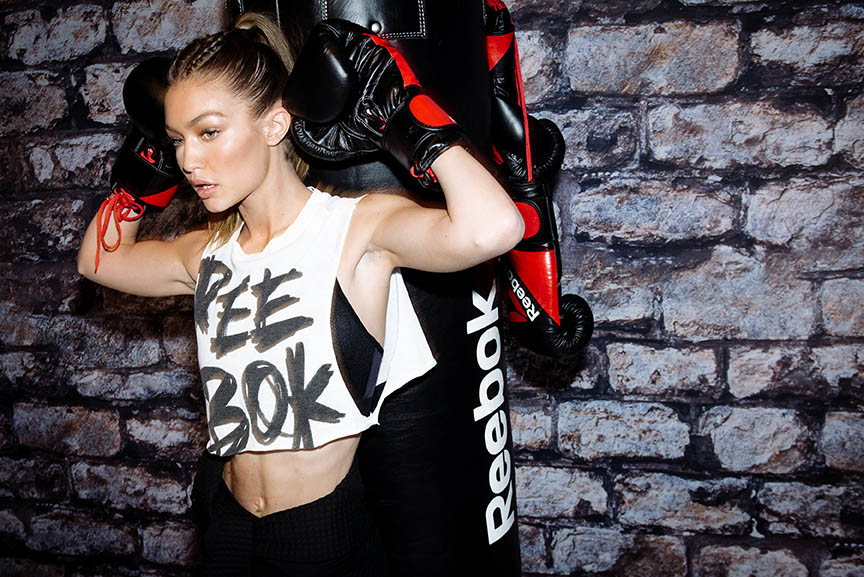 So when I was asked to attend the Reebok event with the supermodel, I said yes partially out of selfishness (hellooo, SWAG bag, and free snacks), and partially out of genuine curiosity. Also, I like her. From afar, Gigi has always seemed thoughtful and down-to-earth, and I wanted to witness that firsthand. I wanted my skepticism about these type of campaigns to be proven wrong, and there were ways in which it was. 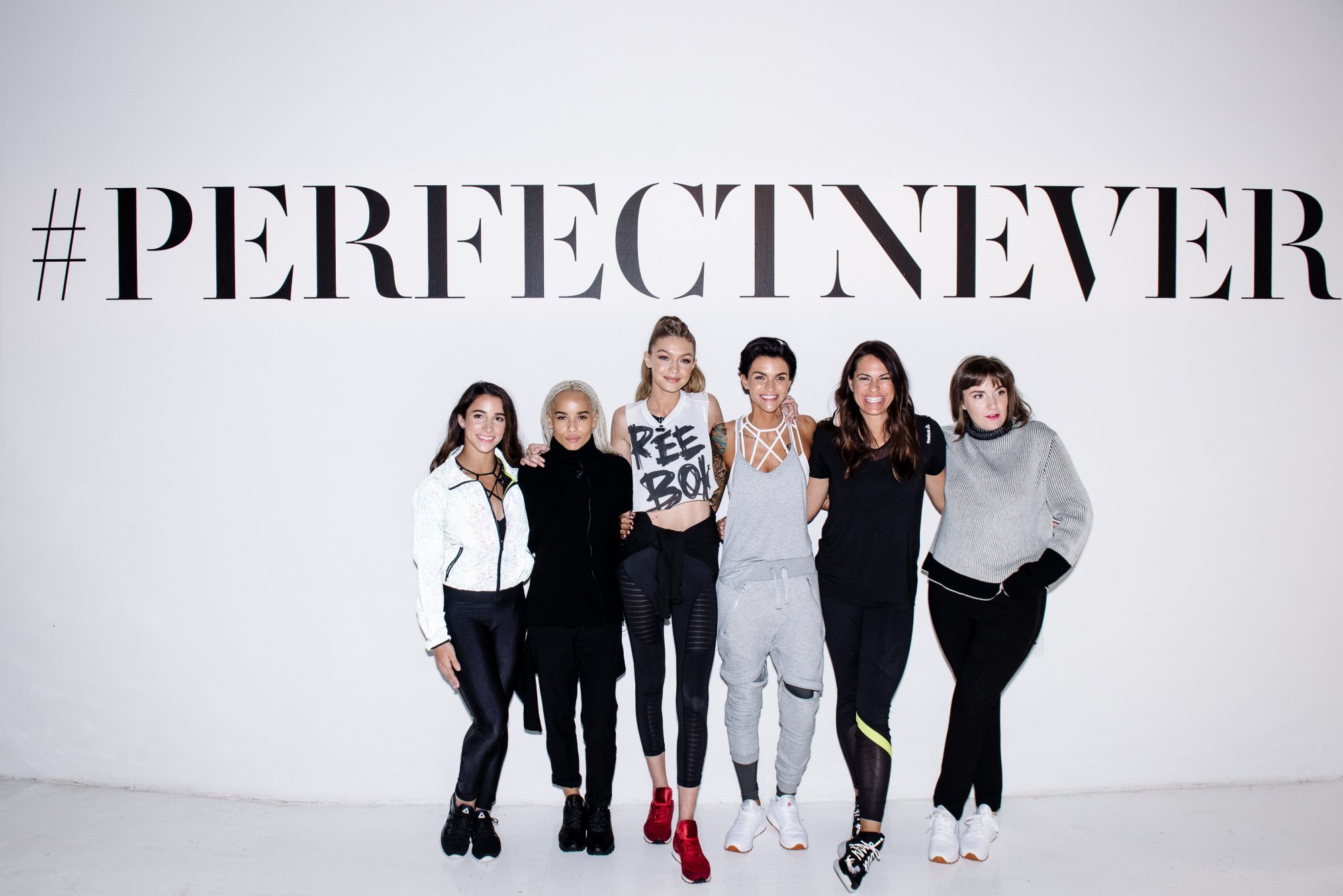 After drinking my fill of complimentary coffee and detox juice (hello, stomach), all of the women attending gathered in a huge, gorgeously lit white room where a Reebok ambassador introduced Gigi and the #PerfectNever campaign. 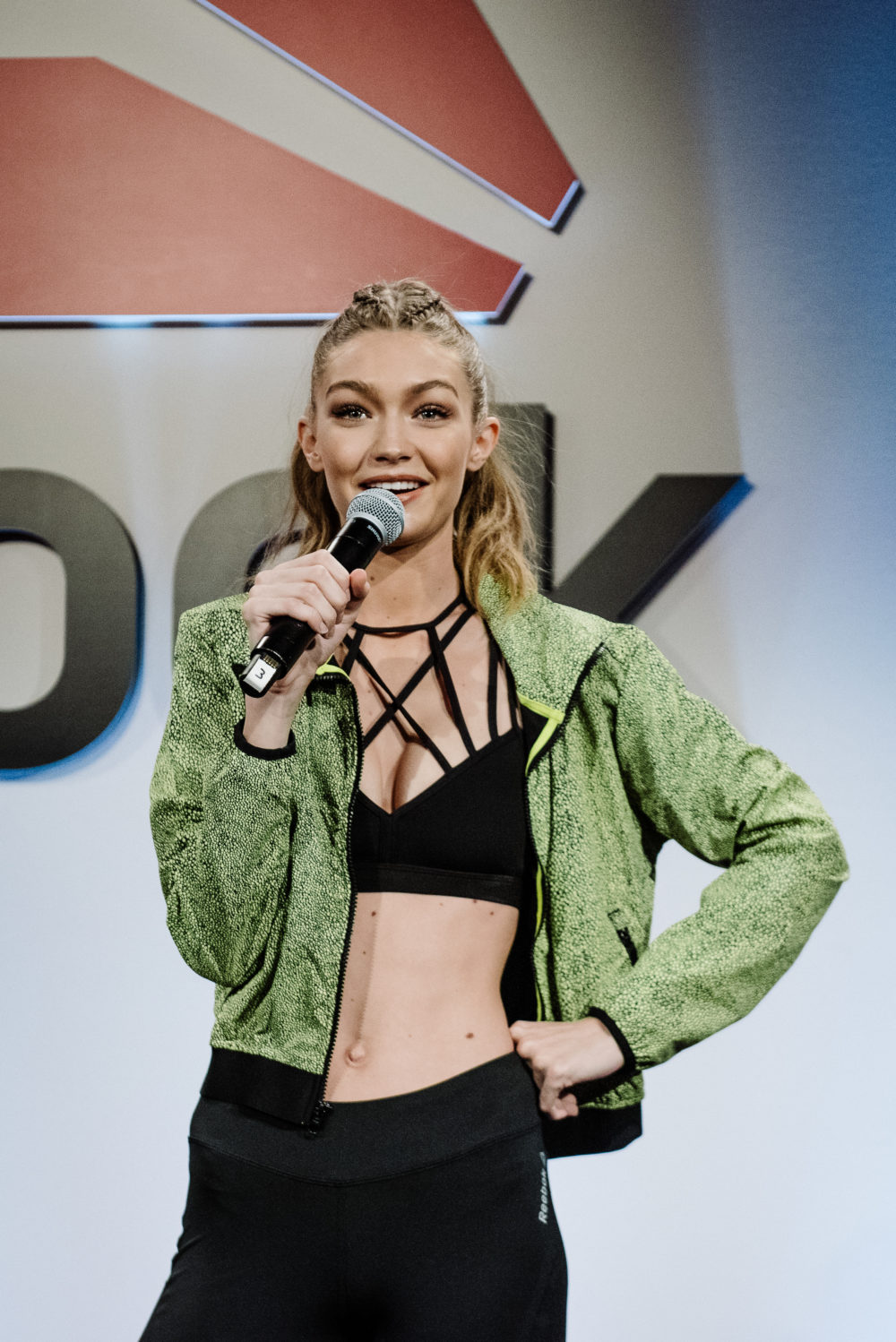 Her presence was warm and she eased us in by making a few jokes about how excited she was to be there. She also shared how being an athlete in high school has provided her with a meditative space to escape the noise of the world.

After Gigi charmed us with personal anecdotes, a few hyperactive Reebok trainers entered the stage and blasted trap music while leading us through an upbeat 45-minute long exercise routine. 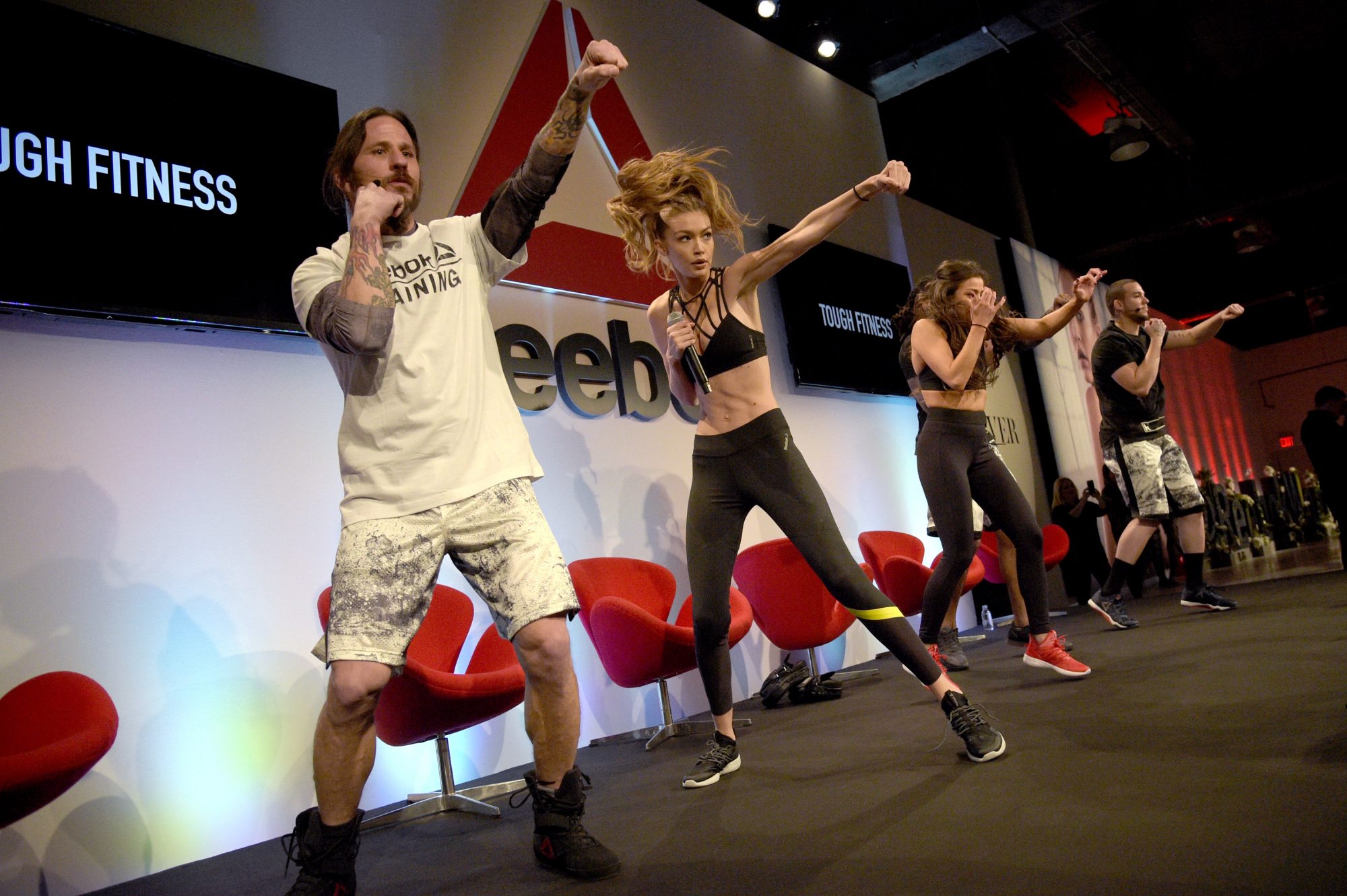 Gigi intermittently joined in on stage. I was pretty sure I sweat out half a cup of coffee while Desiigner blasted on the speakers. I wanted to be mad about the fact that it was actual exercise, but it was good for me.There was even a hype girl who bounced around giving us high-fives.

After we finished our workout, the room was cleared for a panel discussion that included other big names, such as writer and comedian Lena Dunham, the musician/actress Zoe Kravitz, Olympic gymnast Aly Raisman, the smoking actress Ruby Rose, and, of course, Gigi herself. 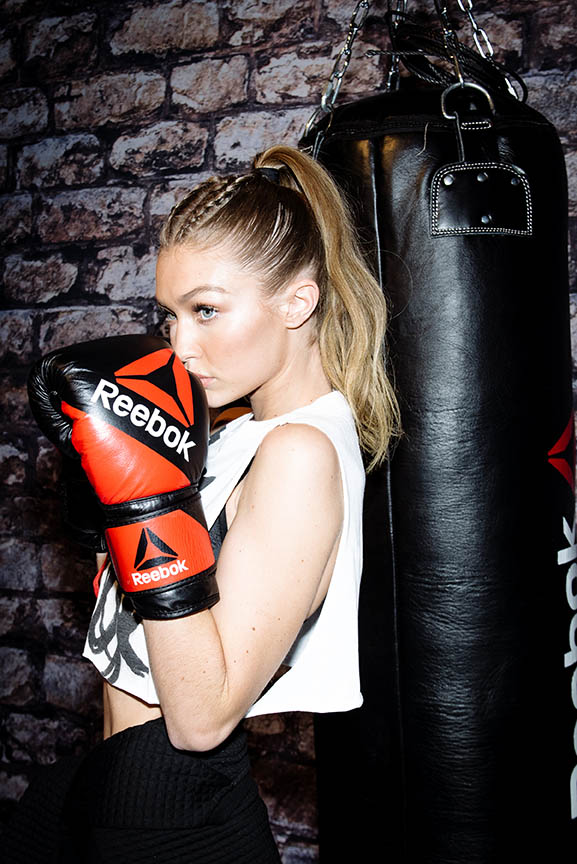 The panel was led by Olympic medalist and ESPN broadcaster Jesse Mendoza, who engaged the women in a series of questions that explored their vulnerability, insecurities, and how they manage the unquenchable pressures of the spotlight. 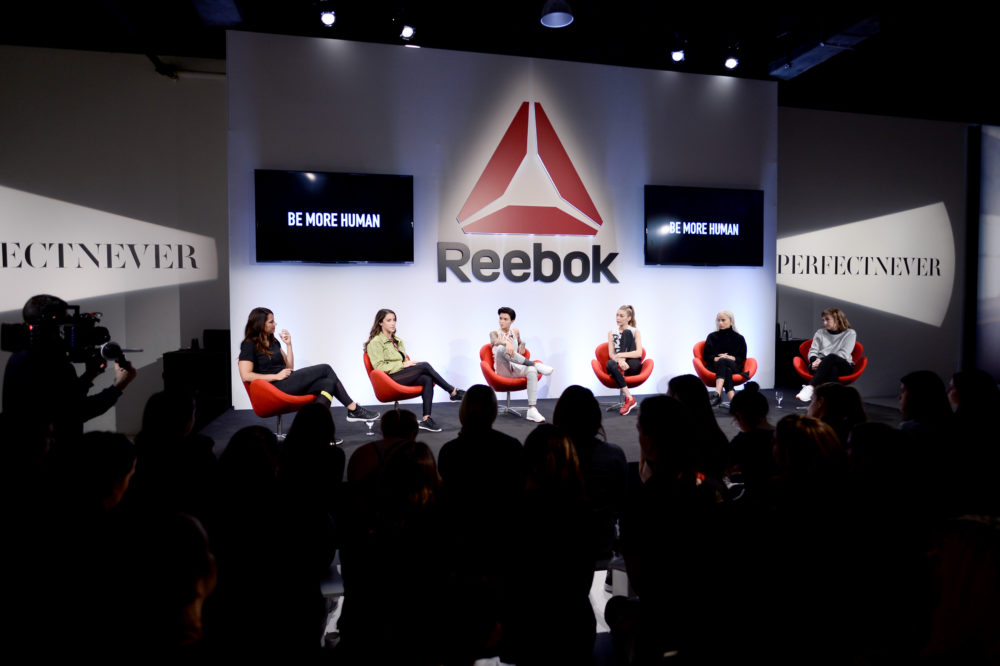 I let my guard down during the panel because all of the women were very genuine, even in the public forum.

At one point, Aly admitted to recently starting therapy and suggested everyone benefit from self-help, while Ruby joked about her friendship with Gigi and how makeup artists and photographers everywhere sing the glories of Gigi’s kindness. Lena cracked jokes about how she overcompensates by spending time talking to fans so they won’t think she’s mean, and Zoe emphasized the need for all of us to practice gentleness in our lives.

You can catch the full live-stream here to get a taste of the conversation.

By the time the panel was over, my sweat from the workout had finally dried (thank god), and I was able to partake in the lush meal of chicken and couscous while the panelists posed for professional photographs. A photographer made the rounds with a Polaroid so that attendees could write messages for Gigi.

Ruby opted to smooch one of the full-size posters. 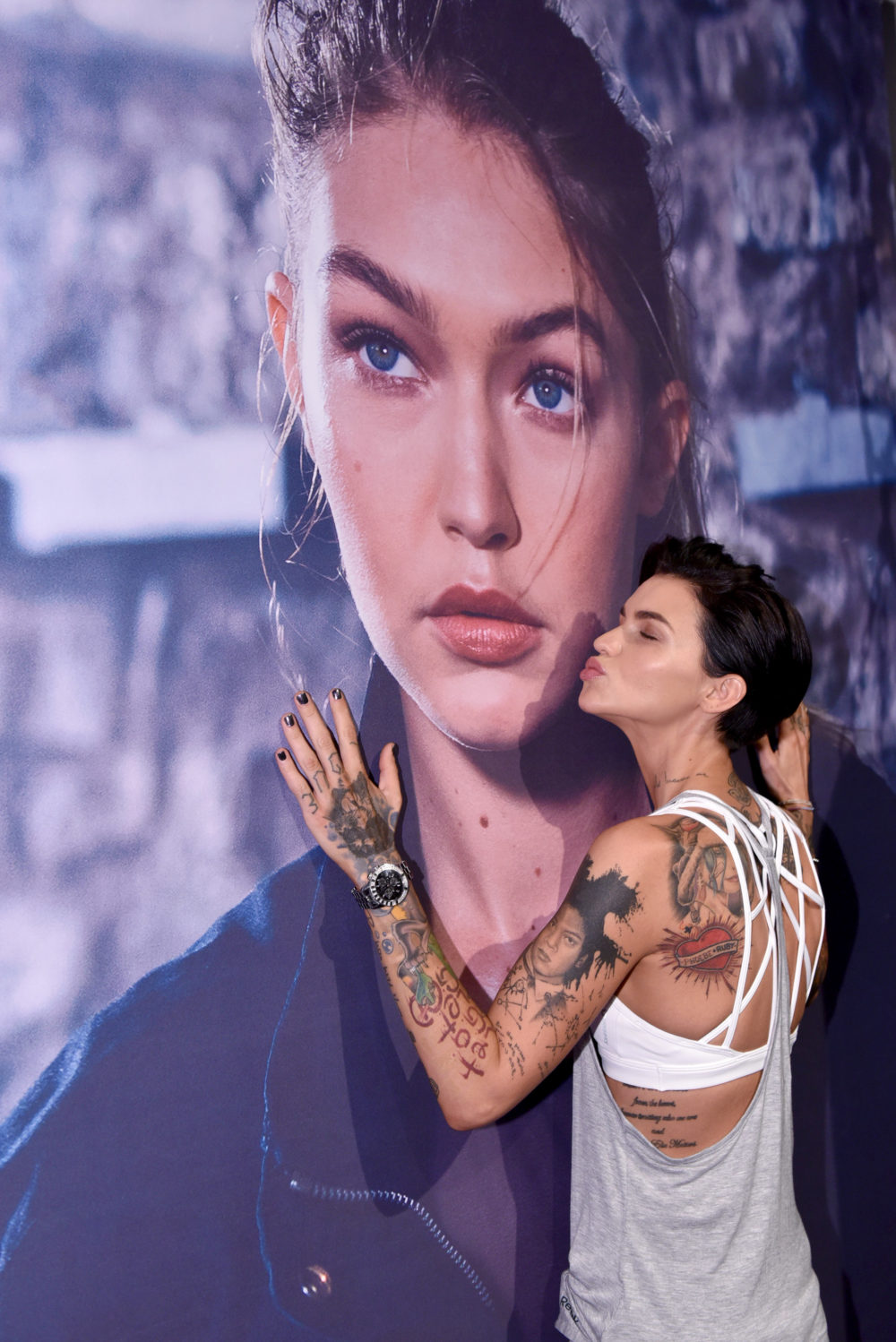 All in all, I don’t think true women’s empowerment will ever come about through a brand’s campaign. But I did appreciate that Reebok provided a forum where people could get a deeper connection with these inspiring women on the panel. They were generous with their vulnerability, which in its own way, fits into the concept of #PerfectNever.