For many of us, our childhood exposure to hypnosis involved the Bugs Bunny cartoon, The Hare-Brained Hypnotist, or some other over-the-top scene showing a shifty character swinging a watch back and forth while the protagonist falls into a terrifying trance. Even in our current day and age, we’re still primarily exposed to hypnotism as a dark and spooky presence. In one of the most recent examples, Jordan Peele’s Get Out, hypnotism is used as a tool to ultimately lull Daniel Kaluuya into complacency as he’s gradually kidnapped by racists.

Unsurprisingly, to those intimately familiar with the real and positive possibilities of hypnotism, these common misrepresentations are not only misleading, but paint a picture very different from reality. In actuality, the practice of hypnotism is much closer to a guided meditation than a drugged trance (although for some people the two sensations are inseparable).

I’ve previously read and heard anecdotes of positive results through the grapevine, but never experienced hypnosis for myself. So when I was given the opportunity to attend a hypnotism session at Maha Rose Healing Center in NYC, I was immediately on board. As with most therapies addressing your emotions, daily stressors, and mental state, hypnotism sessions can be tailored to a specific intention or need.

Even before I arrived at the center, I knew I wanted to focus my session on external self-confidence and truly feeling at peace in my physical body. 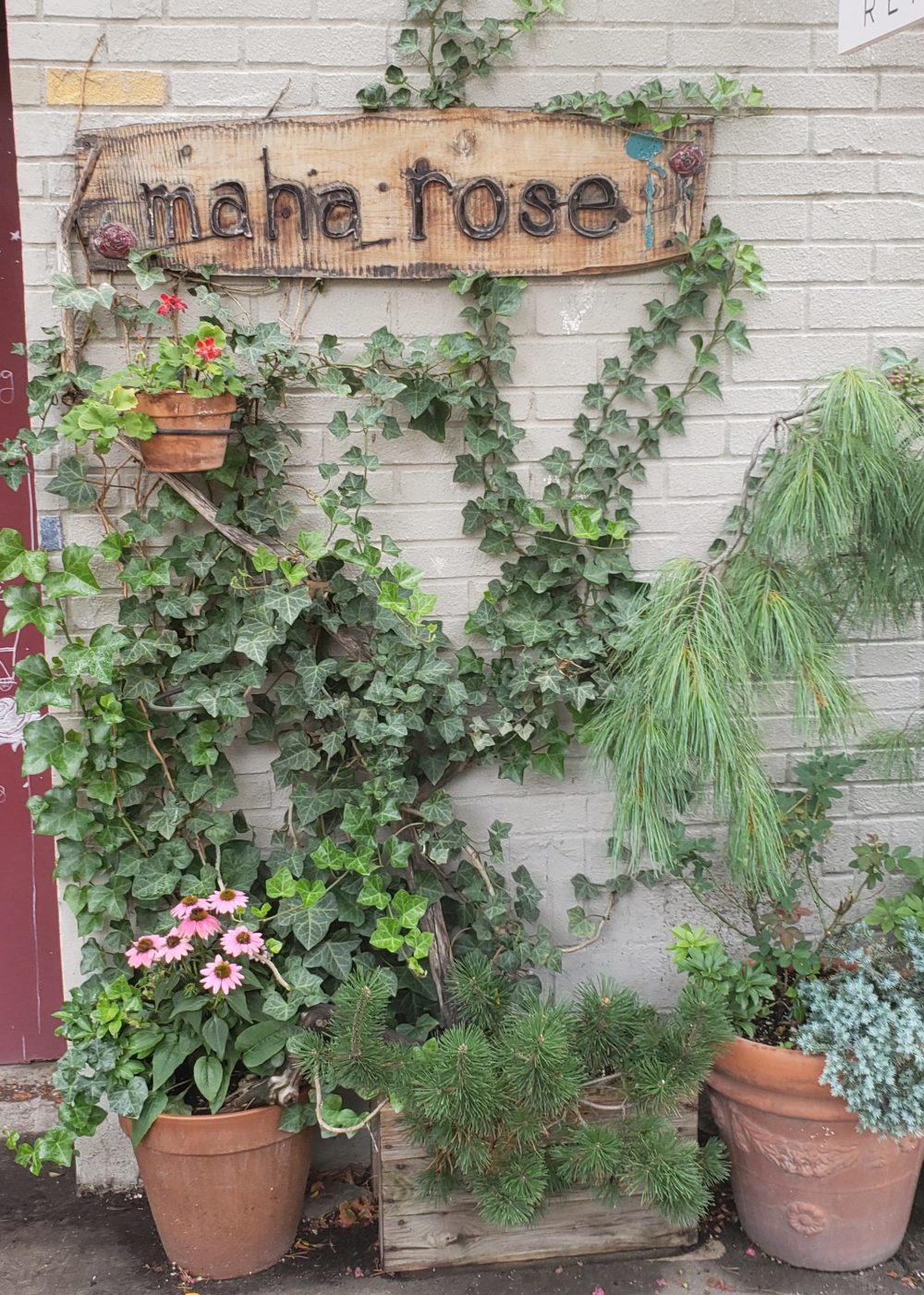 When I first arrived, I immediately felt my humming level of anxiety calm down. There were purchasable crystals everywhere, books on meditation, drinking water soaked in crystals, glass beads, and ceramic eyes decorating the front. It was a space obviously curated to get people in the zone for Reiki, sound baths, or hypnosis. 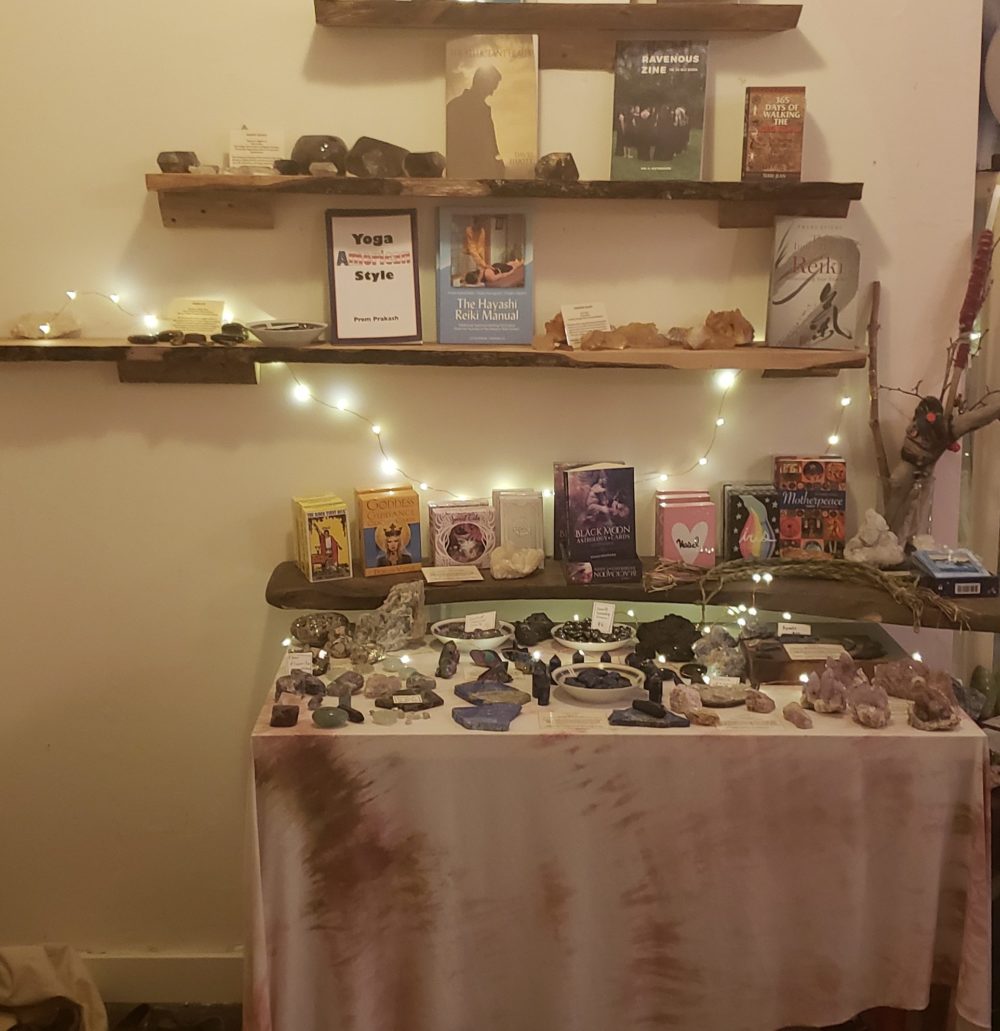 My hypnosis session was with Shauna Cummins, who very warmly welcomed led me to the back room to explain the process. Before beginning, Cummins noted it was my first time, made sure I didn’t have any specific anxieties about the process, and asked about my intention for the meeting.

When I told Cummins I wanted to feel a calm focus in my body, an ability to exert a confidence that matches both emotionally and physically, she was 10 steps ahead. She called what I was describing integration, and shared that she specifically loves to help clients enter this space of “collaboration with themselves.” 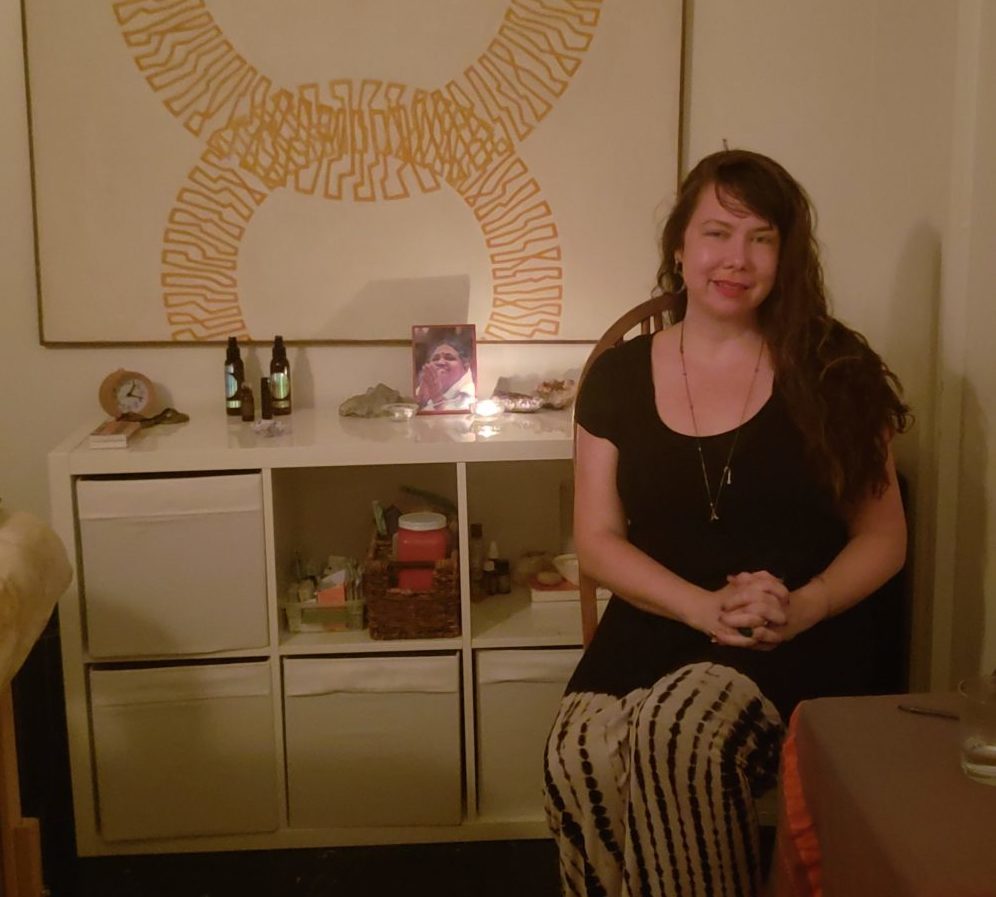 Cummins explained that one of the core beliefs in hypnotism is that our bodies already contain all the knowledge and energy we need.

The practice is meant as an exercise to help us access whatever trait we’ve misjudged ourselves as lacking in, and so for me, this meant the ability to feel at peace in my body. 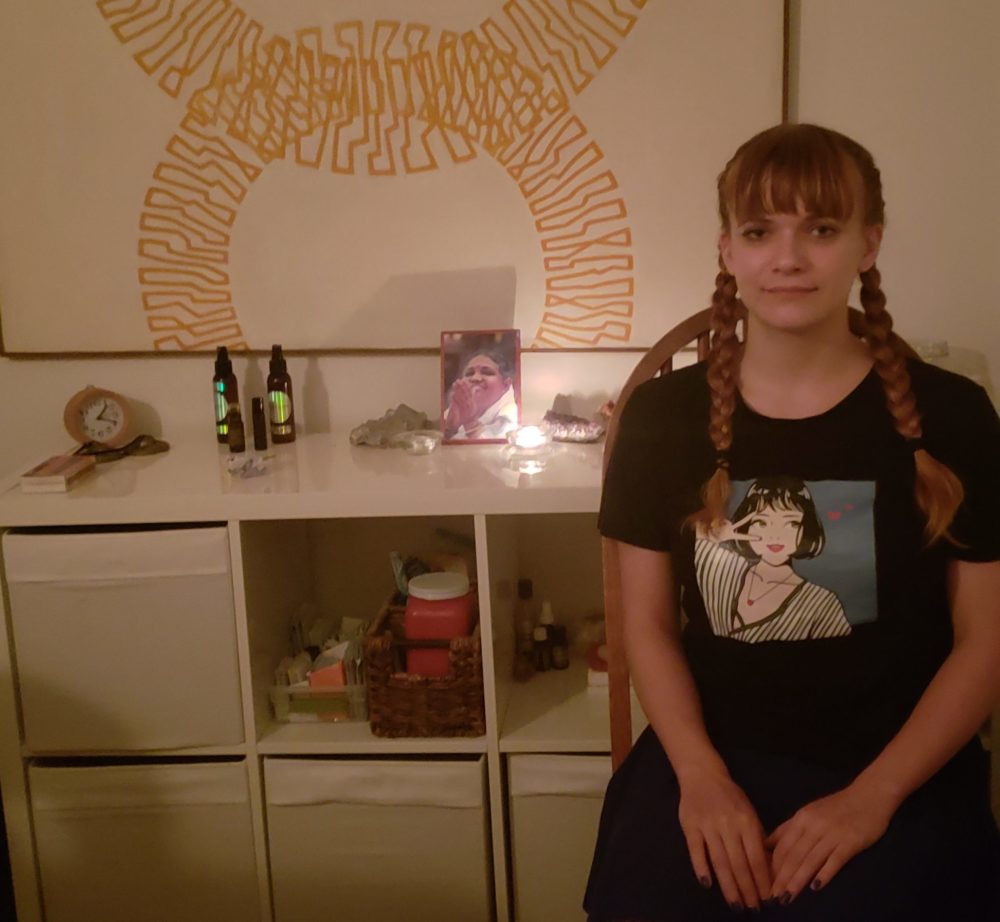 The session officially started with me slowly lifting my right arm, while Cummins guided me. I soon closed my eyes, and was instructed to visualize myself locating my stress. Once I had located a core area stress in my body (whether through obvious physical pain or my imagination), I was then directed to imagine my breaths clearing that stress out and making space for what I need.

At first, Cummins was largely narrating and instructing the session. I would take a breath, visualize my stress and self-doubt as a solid object (for me it was a rock), then proceed to envision myself scooping it out of my body. 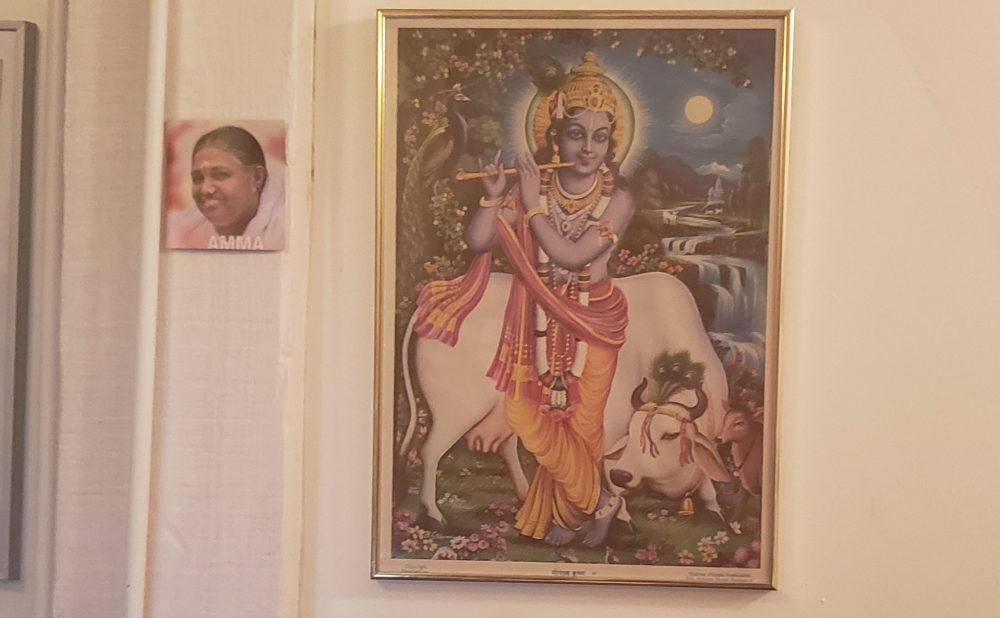 After the first 10 minutes, Cummins moved me to the bed where we moved on to the interactive portion of the session. This was where the collaboration with myself really began. Cummins prompted me to share traits I want to exhibit in the next few months, before visualizing scenes of my life months from now, with those qualities on lock.

She then asked me to name a time in my life where I needed support, and instructed me to visualize my future self visiting my past self to give her affirmation. Throughout this affirmation process she cued me to share words between my future evolved self and my past hurting self. My time-traveling selves were meant to name ways in which the other self was doing a good job. This process, Cummins said, is a form of integration between where I desire to be and where I have been.

The ongoing conversation and prompted visualizations of myself traveling through my emotions required more speaking and rapid thinking than I had anticipated, and in that sense, it felt far more like active therapy than a trance.

When we finished the session, I felt more aware of the way my body interacted with space physically. I believe this was partially because I’d been visualizing myself in the calmness I desired. I felt more aware of how my bangs fell, the ways I was fidgeting my legs, and how my skin felt, but not in a self-conscious way. This was more of a feeling of rediscovery, like when you leave a movie theater and adjust to how bright everything is outside. I liked it. 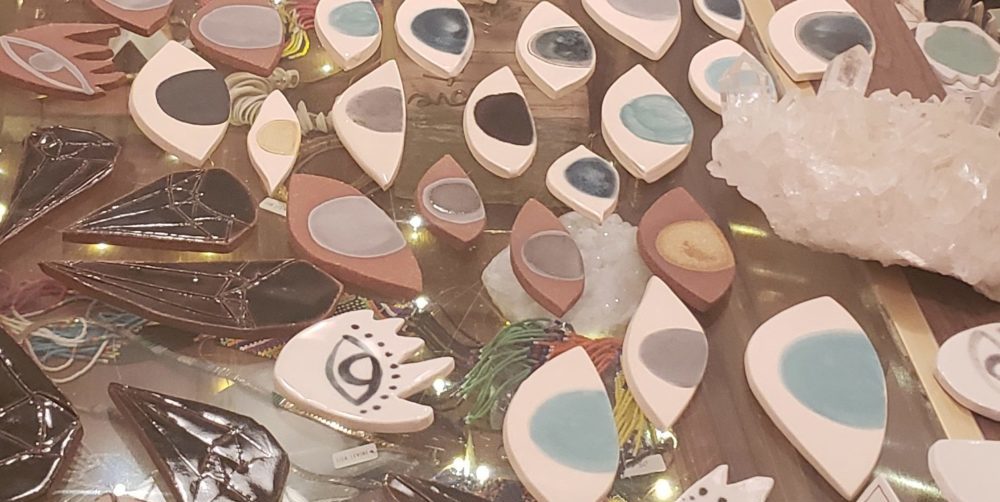 When I asked Cummins if people practice hypnosis by themselves, as many do with meditation, she said both yes and no.

It’s different from meditation, because hypnosis is an interactive process; it’s hard to lead yourself as deep as you can go with a hypnotherapist. However, Cummins does encourage clients to create a daily practice before bed to make their visualizations sink into their brain. For me, she recommended I take three states of mind I want to feel (for example: clear, present, free). Before bed, I’m supposed to write down the three states of mind to plant them in my subconscious. In the morning, I’m supposed to read and repeat those states in the mirror. And, at the end of the day I’m supposed to recognize and name three things I did for myself throughout the day.

These practices, Cummins says, are meant to create habits of compassion toward myself which help make it easier for me to feel calm and comfortable in my body. Since I’ve only attended one session, it feels premature to stamp a definitive verdict on how hypnosis affected my comfort in my body. I will and can say, though, that the process was surprisingly relaxing. It was work that required vulnerability, and exploring my needs through my imagination forced me to sink into my own skin. I felt less jittery for days, and the at-home exercises have forced me to breathe deeper and slow myself down, which makes me feel much less like crawling out of my skin (both out of insecurity and anxiety).

This was the first time I tried hypnosis, but it won’t be the last. I look forward to exploring how these exercises can build increased comfort in my own skin, both on my own and with someone to guide me.