When I found out I was pregnant, my husband and I had just moved into our first home. We had been trying to get pregnant but thought that it would be a long process. As it turns out, we were fortunate that it didn’t take us that long. As I fumbled with the packaging of the pregnancy test, I tried not to get my hopes up. But when the test strip showed the unmistakable pink lines that signaled a baby was on the way, all efforts at remaining nonchalant disappeared.

“Oh my God, Dany; we’re pregnant!,” I yelped, my voice cracking with pent-up emotion. My husband burst into the bathroom with an indescribable look of wonder and excitement on his face as I waddled to hug him with my pants still down by my ankles. We were laughing and crying, unable to believe that the miracle we had been praying for was actually happening.

Immediately, I began Googling pregnancy nutrition and health tips and downloaded a pregnancy app so that I could track the baby’s growth and development. I followed Instagram accounts that covered every stage of pregnancy, eagerly looking forward to crafting my own adorable posts. Calling my gynecologist to set up my first appointment, I was determined to approach pregnancy the same way I had approached college, career, and virtually every aspect of my life: with an overwhelming desire to take control of the situation and to prove to myself and everyone around me that I was more than capable of succeeding. I’d always dreamed of being a mom, and now that my dream was coming true, I was set on being the best mom.

However, my plans for a flawless pregnancy started to fizzle as I began the sixth week of pregnancy. Suddenly, I was incredibly nauseous, and it wouldn’t subside, no matter how many dry crackers I munched on or ginger candies I chewed. The nausea gave way to vomiting, which I initially dismissed as a bad case of morning sickness. After all, my pregnancy app warned that this would happen, and I saw it as a badge of honor; I was checking all of the symptom boxes and everything was going according to plan.

But when the vomiting escalated from two or three episodes a day to over 15, I knew something was wrong. Everything I ate or drank refused to stay down. From the moment I woke up the nausea was unrelenting, and the slightest movement provoked intense vomiting spells. Desperate for relief, I tried every morning sickness hack I could find—sea bands, ginger teas, acupuncture—but nothing helped.

None of the pregnancy Instagram accounts I followed or the pregnancy apps I downloaded portrayed anything even remotely close to my symptoms. I felt as if I had somehow been excluded from the hordes of happy, healthy, pregnant women, cut off and left to struggle with my mysterious symptoms on my own.

As the mysterious condition worsened, it became hard to walk. If I tried, my legs would shake uncontrollably, and my husband would have to carry me from the bed to the bathroom because I was so dizzy. My physical frailty filled me with frustration, and I would often break down, unable to cry because of how dehydrated I was. It was infuriating that there was no remedy for my suffering, no telling how long it would last or when it would stop. Sleep was the only time I could escape from the prison that was my body. There were days when I wanted to die rather than face hour after hour of nausea and vomiting. But then I would remember the tiny life growing inside me and pray that, unlike me, he or she was doing just fine.

By the time I went to the doctor for my nine-week checkup, I had lost fifteen pounds and hadn’t eaten in days. The nurse took one look at me and promptly sent me to the ER.

It was there that I finally learned that I was experiencing hyperemesis gravidarum. Characterized by incessant nausea and vomiting, hyperemesis gravidarum, or HG, is a rare pregnancy complication that occurs when nausea and vomiting cause extreme weight loss and dehydration in pregnant women. Women suffering from HG often require medical intervention in the form of IVs, feeding tubes, and powerful anti-nausea medication. HG doesn’t only affect women’s health, however; many lose their jobs, while others are unable to care for their families, let alone themselves. For the estimated 0.5 to 2% of pregnant women who suffer from HG, there’s also the constant fear that the condition will take their lives or the life of their unborn baby. 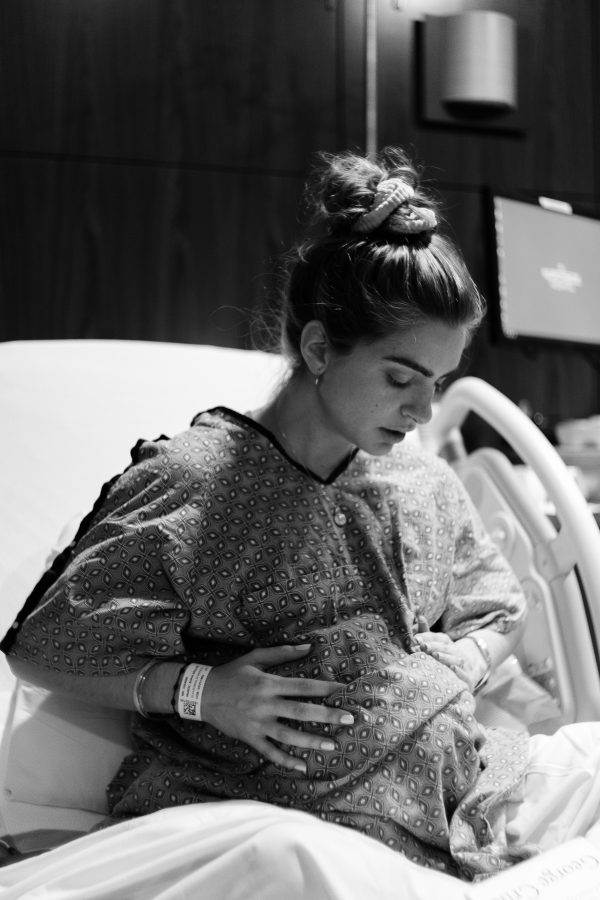 I lost 12% of my pre-pregnancy body weight and had to be hospitalized twice for dehydration and malnutrition as my kidneys were on the brink of malfunctioning. After my first visit to the ER, I was sent home with instructions to remain hydrated, but I wound up back in the emergency room less than a week later. This time, the doctor took my condition seriously and had me admitted to the hospital for a week. I then received fluid and medications through an IV as my doctor tried different treatments to help me manage the nausea.

As I laid in the hospital bed and looked down at my emaciated body, fighting the urge to vomit yet again, I kept thinking how this was all wrong. I wasn’t supposed to feel this way. My body wasn’t supposed to be reacting like this. This wasn’t the pregnancy experience portrayed by social media, apps, or articles, and it certainly wasn’t the pregnancy experience I had envisioned for myself.

Instead of radiating healthy, glowing, mom-to-be vibes, I was a shadow of my former self: skeletal, wracked with anxiety, perpetually nauseous. Why had I never even heard of this version of pregnancy?

Unfortunately, treatment for HG is limited. My doctor suggested a powerful medication commonly used to treat nausea in chemotherapy patients. The only drawback: The medication could cause a heart defect in the baby. My options were to begin taking the medicine immediately or to wait another week while the baby’s heart finished developing. I felt there was no choice: I had already fallen in love with the little person growing inside me, and I was determined to fight to give my baby the best chance, no matter the cost. I was mentally and physically depleted, but some kind of mama bear instinct kicked in and gave me the strength to withstand one more week without medication.

My husband supported my decision and stayed by my side as we waited for the week to creep by. Once my doctor did start the medicine, I was vomiting less and able to eat some bland foods. I was eventually discharged, determined to regain the weight I had lost while also building back up the muscles that had atrophied after weeks of laying in bed.

After returning home from the hospital, the road to recovery was difficult; I still had days when the slightest smell provoked debilitating nausea. I was also comparing how differently my pregnancy was unfolding from other people’s. Instead of indulging in mom-to-be activities like spitballing baby names or decorating a nursery, I was fighting for my life and the life of my baby. Every day I was tempted to blame myself for not measuring up to the standards set by other moms and by society at large. Because of my condition, my pregnancy felt like something to keep hidden away, rather than something to celebrate. Yet I pushed on, knowing that all of the pain would be worth it to hold my precious baby in my arms.

The most frustrating aspect of HG is that many healthcare professionals dismiss HG as exaggeration on the part of the pregnant woman, or the result of some psychological imbalance. This happened to me the first time I was admitted to the emergency room. The physician’s assistant dismissed my symptoms as “really bad morning sickness,” making me feel like I was being dramatic or simply unable to handle the normal discomforts of pregnancy. Family and friends mirrored these comments—they would helpfully suggest I drink ginger ale. Even worse was when smug women would tell me that they too had “been really nauseous” during pregnancy, but going on a walk did wonders for them. “Have you tried that? Going on walks? It’ll clear your nausea right up.” Never mind the fact that I had no strength to get out of bed or even stand on my own.

I started downplaying the severity of the condition, too, if only to better fit into the perception of what pregnancy should be. When friends asked how I was feeling, I would answer positively, not wanting to be branded as one of those women who complain instead of sucking it up. Whenever I did open up, I felt I was burdening the listener with information they simply didn’t want to hear because it didn’t sound like the perfect pregnancy.

With the help of my doctor, my HG became manageable and even subsided by the midpoint of my pregnancy. Within six weeks of being discharged from the hospital, I started to gain weight and was down to vomiting three to four times a week, instead of every hour. But the effects of those nightmarish weeks continued to impact me, not just physically but psychologically. Since then, I’ve avoided certain routes on my commute that I associate with vomiting. I’ve experienced recurring nightmares in which I relive the ordeal. I’ve constantly feared that my baby would be affected by the condition and I’ve worried over the idea of being pregnant again, because there’s a high likelihood that I’ll experience HG again.

Then there’s the isolation and loneliness I experienced when I was suffering through HG. For weeks, the only people I saw or interacted with were my husband, doctor, and parents; I was too sick to see anyone else. Gazing at pregnant friends’ picture-perfect social media posts made me want to withdraw even more, rather than reach out for the support I so desperately needed.

Social media and women’s publications consistently tell us that when we’re pregnant, we’re supposed to look and feel a certain way: that carrying a tiny human should make you glow, make your hair glossy, and suddenly make you look amazing in maxi dresses. But for those like me who had a less than idyllic pregnancy, these expectations can make us feel alone and guilty.

Why was my body rebelling against pregnancy? Had I done something wrong to cause this condition? Was this a sign that I would fail as a mother?

Fortunately, websites like HER Foundation provided advice and tips and made me feel less alone. Fellow HG survivor Amy Schumer’s Instagram offered me a comical reminder that other women had suffered HG and survived. Poring over these resources reminded me that even though my pregnancy looked different than most, it was no less special. In fact, the suffering I experienced added to the beauty of my pregnancy, rather than robbing it of its splendor.

I think there’s a fear that if we portray something besides a picture-perfect pregnancy, we’re being ungrateful, complaining too much, or simply oversharing. There’s this notion that no one wants to know about your struggles, they just want to double-tap on your adorable gender reveal video and keep scrolling, as if the only worthwhile things in life are those that pop with a Valencia filter. But if there’s one thing I learned from my pregnancy, it’s that often the most difficult experiences—the ones that push you to your limits, cause you to question yourself, and mercilessly challenge you—can also be the most transformative and amazing.