The power of the Internet is a beautiful thing – particularly when super-smart folks use it to spread information they worked out for a loyal fan base. For example, when that one person used IRL math to figure out the Muggle-money worth of every single item assigned a wizarding-money value in Harry Potter, and we realized textbooks are a rip-off even to magic folks.

And now, genius The Walking Dead fan Matt Lieberman uses similar reasoning to figure out just how many humans in the world are alive in the show’s universe.

The answer – 382,885 humans – is jarring, to say the least. After all, we’re seeing new humans seemingly every week on the show, right? But I guess a show just about hordes of walkers roaming around looking for food wouldn’t be that exciting.

To reach this number, Lieberman first started looking at context clues in the show’s prequel, Fear The Walking Dead – for example, technology used by the characters (e.g., an iPad 2) and also the fact that the Los Angeles-based characters were wearing winter clothes. The lack of holiday décor around allows Lieberman to conclude that the time the outbreak first occurs is sometime in winter 2012 (even though The Walking Dead premiered in 2010).

Then, he takes the total global population at the time (almost 7 billion) and considers the fact that the creator of The Walking Dead stated in the graphic novels that walkers outnumber non-infected humans by a ratio of 5,000:1 – which means around 1.4 million people were still alive/uninfected by the time the outbreak spread worldwide.

He then takes the number of characters we’ve met (347) and the number of deaths we’ve seen (252), and uses that to conclude that almost three-quarters of the earth’s population has perished since the beginning of the outbreak – which leaves only 382,885 people alive worldwide in the show’s current timeline (around early December 2013, according to Lieberman’s calculations. 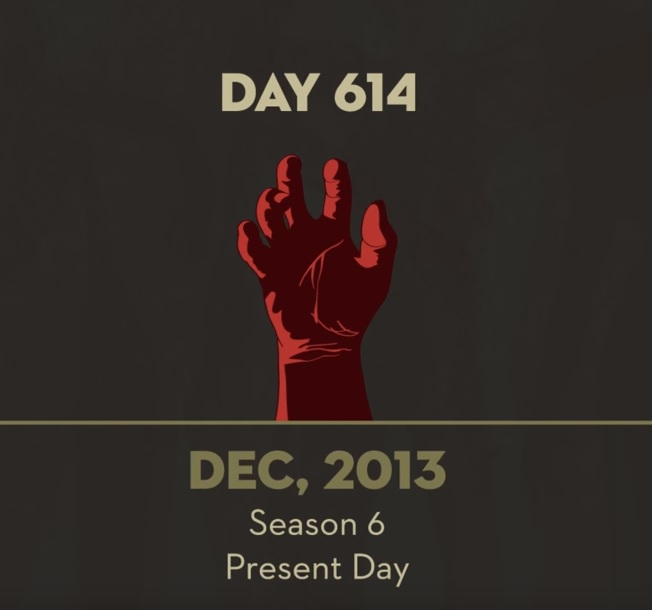 That’s pretty scary. We’re glad The Walking Dead is just a TV show, because it’s safe to say if it was real, the odds would definitely not be in our favor. And we’re prepared for more deaths – just keep #Richonne (and Daryl) alive, and we’ll be fine.

You can watch the entire video below, where Lieberman impresses us with an explanation of exactly how he came to his conclusions.