You know how if you want something done right, you have to do it yourself? Most people wouldn’t necessarily apply that mantra to something like surgery, or commercial building demolition, or cutting your own hair. All things you should leave to the pros. I’ve cut my fair share of hairs, most of them on other people’s heads—mostly the heads of boyfriends and ex-boyfriends because boys are apparently way more trusting (read: cheap/can’t be bothered) towards a girl who owns a pair of hair-cutting shears than the whatever barber over on Schmo Road.

For the past two years, I was growing out what I can only call an antagonistic (albeit well done) haircut that brought me from a layered chin-length chop with baby bangs to boob-veiling lengths. Until recently, I was nearly back to boob-grazing until my blonding prompted me to have that chopped, too, giving the stylist fairly free reign to “do whatever you feel is best.” He cut off the really frazzled ends—all five inches of them—leaving me with razored ends just past my shoulders, with no layers.

That’s all fine and good for people with thin or fine hair, but for someone with thick, ropey strands, all this equals triangle head. For once in my life, a stylist gave me short hair with no layers—so editorial chic—which looks great on the pages of Dazed or V or other oversized quarterly mags that cost as much as paperbacks; I, however, do not have an on-set hair architect making my triangle hair looking perfectly acute.

Had this been my born-again virginal hair, I don’t think triangulation would be an issue. But as those who’ve gone the platinum route can attest, the double processing does change the texture of your hair. It’s different for everyone, and in my case, my hair made like a spooked cat, haunches arched, tail pouffed. My head is basically covered in puffy cat tails, like the love child of Boo Radley and Medusa.

I have a vague memory from a past hairdresser who suggested that if I wanted to go short, under-shaving would remove the bulk. Dude, what even? Not that I’m a buzzer baby, but the prospect of having to grow that out in any graceful way is just unfathomable. I’ve had my Chinatown hairdresser straight-up slice out chunks of hair from the mid-layers to remove bulk, but this was also in conjunction with long layers, so while I could never detect where the chunk was and how much of it was gone, the fact that there were layers meant that I didn’t really care.

Nothing against my last hairstylist, who did a great job, but a day or two after he cut me, I kind of went to town trimming what he did, about two inches, so it wouldn’t rest in a weird way on my shoulders and poke me in the collarbone. Having cut and trimmed my own bangs many times before, I thought, how hard could it be to trim my own hair? I’m one of those people who pay close attention to whoever is working on my hair to quietly lurk on their technique, just in case I ever wanted to use it on myself. 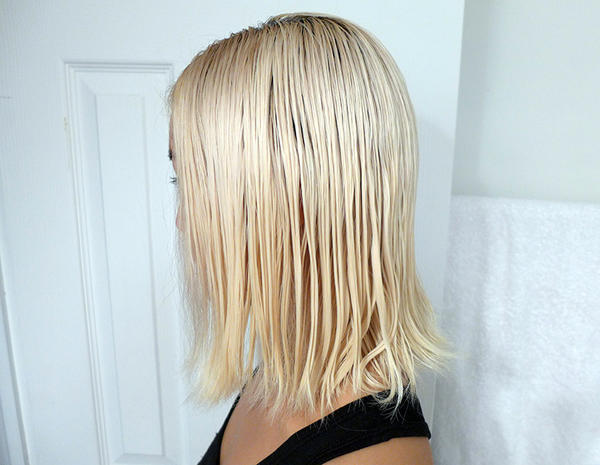 Filed Under
how to
Latest