How to continue fighting rape culture after Inauguration Day, after the Women’s March, and beyond

The other day, I casually grabbed one of my favorite sweaters as I headed out for work — then, I quickly shoved it back in my closet and slammed the door. It took me a moment to pinpoint the reason why I suddenly had an aversion to this particular item of clothing — I had been wearing it on Election Night, when I watched a man who talked about “grabbing women by the pussy” become America’s president-elect. As someone who was diagnosed with PTSD after being raped, it’s no surprise that my symptoms have intensified in the weeks since November 8th.

When I say that Election Night was a traumatic experience, I’m not exaggerating.

I still won’t touch any of the clothes I wore that night — the same as I’ll never again wear the skirt or top that was torn off my body when I was raped.

Occasionally, I’ll be going about my daily activities, and suddenly zone out as I flash back to the moment I realized Trump would win the election. I’ll remember the moment I watched him take the stage to deliver his acceptance speech. These flashbacks invade my mind in an eerily similar way as the flashbacks to my sexual assault.

To be clear, these symptoms are directly related to my pre-existing PTSD — I’m not traumatized because I’m a sore loser who can’t stop crying after her candidate didn’t win the presidency. And I’m far from the only sexual violence survivor who has experienced significant setbacks in the weeks since Trump’s election.

The Huffington Post recently reported that a number of survivors are struggling to have sex again, even with trusted partners.

It’s also incredibly important to note that Trump himself isn’t the only person in this election who re-traumatized survivors. In fact, I’d argue that the 62 million Americans who knowingly cast their votes for a man who has been accused of numerous sexual assaults are my main concern. It will undoubtedly be painful to say “President Trump” for the next four years. As a news junkie, I won’t be able to avoid the sight of this man’s face — this man who bragged about “grabbing women by the pussy” will now move to 1600 Pennsylvania Avenue. 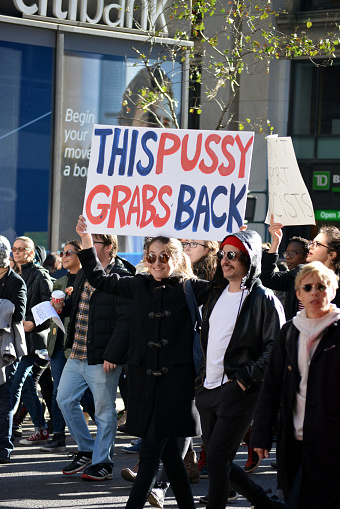 But I’m not naive and I’m all too aware that men like this exist. The root of my despair lies in the fact that 62 million voters knew about the Trump tapes — and decided they weren’t a deal breaker.

I can’t speak on behalf of all survivors, but for me, these voters represent the people in my life who invalidated my experience.

They’re the people who asked if I was absolutely sure that I said “no,” who wanted to know exactly how many times I said “no” and “stop.” They raised an eyebrow when I admitted that — in my frozen and petrified state — I didn’t physically fight back. They’re the people who were understanding at first, but quickly lost patience when they realized my PTSD wasn’t going away any time soon; I wasn’t simply going to bounce back to my bubbly, social butterfly self.

In short, they’re the people who think sexual assault just isn’t a big deal — even if the perpetrator happens to be seeking the highest office in the land.

It’s always been important to challenge rape culture — but there has never been a more important moment than right now to to fight back against the dangerous ideology that claims sexual assault is a “gray area” or a “misunderstanding.

Those have always been pathetic, infuriating excuses — and this election is direct evidence of just how much damage this mindset can cause.

Although I hate that I came forward under these circumstances, I never spoke publicly about my sexual assault until the release of the Trump tapes. The week they were released, I noticed that my Facebook newsfeed was full of women opening up about their own experiences with sexual violence. I knew many of these women well, but I didn’t know their stories — just like they didn’t know mine. We reconnected and the solidarity provided a great deal of comfort, especially after November 8th.

Despite my own experience, I’ve been known to stay quiet during conversations about sexual assault, especially when I’m with a large group of people — but I won’t be silent any more. Like every single other survivor of sexual violence, I have nothing to be ashamed of and, if my story can change the mindset of just one person, then it’ll be worth the discomfort of speaking up.

Now is the time to start important conversations with our friends and family members. It’s the time to call out every single inappropriate comment that either deliberately or inadvertently perpetuates rape culture.

We can no longer sit in silence when a casual rape joke is made in our presence, even if the person has no malintent. Because, so often, rape culture starts with a simple, seemingly harmless joke — and then it quickly snowballs into the normalization of a horrific crime that leaves survivors physically and mentally scarred.

Not every survivor in your life will feel comfortable admitting that he or she is struggling — and, while you should certainly respect their boundaries if they decidedly don’t want to talk, please don’t be afraid to check in with us. We’ll tell you if we’re not in the mood to talk about it. Often, people have the best of intentions and think they’re being respectful by not bringing up the topic — but, in my own experience, it’s been helpful when someone encourages me to have a conversation. It reminds me that I’m not the one who should feel humiliated.

Finally, if you have free time to volunteer, survivors need you now more than ever.

After the Trump tapes were released, sexual assault hotline traffic increased by 33%. If you’re interested in volunteering, here are some amazing ways to support RAINN, America’s largest anti-sexual violence organization.

Sign up to volunteer for the National Sexual Assault Hotline.

Find out how to become a fundraiser for RAINN here.

Get the details about organizing your own event here.

If you’re a college student, bring activism to your campus.

We’re Stronger Together and we will survive a Trump presidency — but it won’t be easy, and we need to be fighters. A huge part of that fight is taking on rape culture, and we can all play an important role.