How to accept constructive criticism gracefully

Like death and taxes, a constant in life is the fact that none of us is perfect. Whether we’re just starting out in a new career or are experts in our fields, whether we’re novices or pros at, for example, all things exercise, whether we’re inexperienced or really adept when it comes to relationships, etc. — chances are there will be a time (or many times!) in our lives when we could use a little correction and guidance.

In our professions, we need to respect our superiors and get things done. And in our relationships, it’s important to acknowledge if we’ve formed bad habits, even if we aren’t thrilled that a family member is pointing it out to us.

Criticism can be a hard pill to swallow.

But in order to improve at most things, it typically can be helpful to receive a little nudge in the right direction. Those of us working in fields in which we are constantly being corrected or critiqued (ahem, writer!) know that learning from criticism is necessary if we want to improve in our craft and advance professionally. So, from someone who has a lot of practice, here are a few things to keep in mind when trying to accept constructive criticism gracefully: 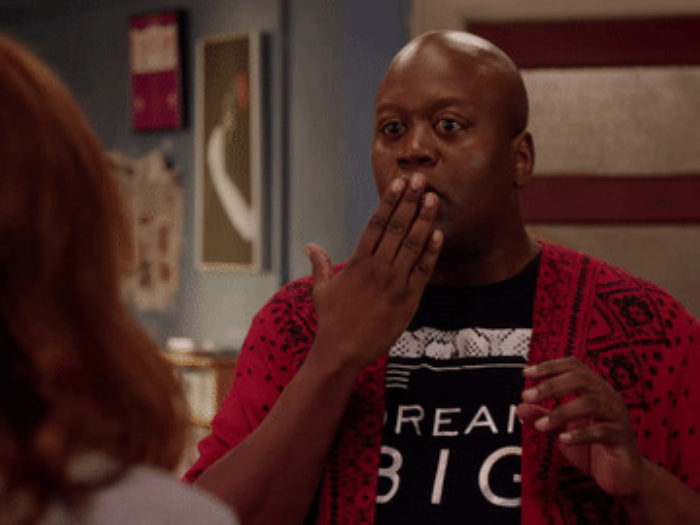 Who is this person offering you feedback — a boss? A parent? A friend? Does this person have experience backing up what they’re saying? Or, if they don’t have more experience than you, do they still excel at something you aspire to? Most importantly, are they in charge of you somehow, like a supervisor?

If so, whether you like it or not, you should probably pay attention to what this person is saying. They know what they are talking about — and even if they don’t — it’s typically your prerogative to respect their opinion, follow their guidance, or at least keep it in mind.

Not all people who give constructive criticism are in a position of power or authority over us. And that’s okay, too. They can still be capable of giving valuable feedback. Even if what is being said doesn’t turn out to be helpful, generally speaking, remaining respectful in the situation will benefit all of those involved – and it is also just the nice thing to do.

Remain calm. Breathe. Remember, if someone is being constructive — not abusive or mean — they are likely trying to help you. It probably won’t do you any good to get defensive. Doing so can make you come off in a negative light, and can also keep people from wanting to help you in the future. Not to mention it’s likely that you’ll later regret the things you said (or how you may have acted) while in the heat of the moment.

Sometimes, being quiet and taking in what is being said is all you should do when receiving feedback — especially if your impulse is to jump in with an explanation for whatever it is you’re getting critiqued over. Carefully listen to what the person is saying. Make sure you understand them by repeating or rephrasing key things they’ve said, if that is something helpful for you and appropriate in the situation. Once you’re sure you understand the point that is being made, thank the person. Again, they are trying to help. And critiquing someone else is sometimes a really hard thing for people to do.

Don’t immediately obsess over the situation. Give yourself time to clear your head by focusing on something else for a while, and sleep on it if you can. It can take time for wisdom to sink in, or for you to cool off if you’re upset about the remarks. Chances are, you’ll be better able to respond thoughtfully after some time, so waiting before doing so is often a good idea.

If you’d rather listen before speaking or asking questions (as noted above), after telling the person who is giving constructive criticism that you’d like some time to process what they’ve said, ask if you can set a time in the near future to seek clarification. When asking questions, make sure they reference what was actually said. Ask for specific examples of the type of behavior that is being critiqued. Ask for specific examples of how improvements can be made.

Give yourself a break

Some of us tend to take criticism hard — even if it’s constructive and offered in a kind or professional manner. Try to remember that everyone has things they can improve on. The fact that you have the opportunity to improve is a positive thing. Don’t be so hard on yourself.

After the information has sunk in, you may understand the criticism with more clarity, and even find yourself on the same page. If not, at least you haven’t made the situation worse by how you reacted to the critique.

Accepting constructive criticism can be super challenging — especially doing so gracefully — but it’s something we all have to do.

The better we are at accepting, digesting, and implementing feedback into our future actions, the more likely we are to improve at whatever goal it is we are working toward. When we keep that in mind, as well as give other people the benefit of the doubt, it makes growing that much easier.