Monogamous couples may expect to spend Valentine’s Day together, but what about polyamorous couples? Even for monogamous couples, Valentine’s Day can be a bit tiresome, forced, or stressful. The pressure to organize a perfect date on the Hallmark holiday can make partners forget what they are even celebrating in the first place. For poly couples, this stress may be even more compounded considering the presence of more partners in the relationship.

I talked to two poly people — one married and one currently dating — to find out how they spend February 14th.

Wedding registry site Zola recently conducted a study of married couples that found most couples are more intimate on Valentine’s Day than they were on their wedding nights. Moreover, 41 percent of couples found that their most memorable Valentine’s Day was spent at home. I spoke to Tess,* who has been married to her spouse for two years and together for nine and a half.  They don’t have any outside partners currently, but they do date and have sex with other people. But since they aren’t emotionally connected to any of those other people, they haven’t considered spending Valentine’s Day with anyone but each other. 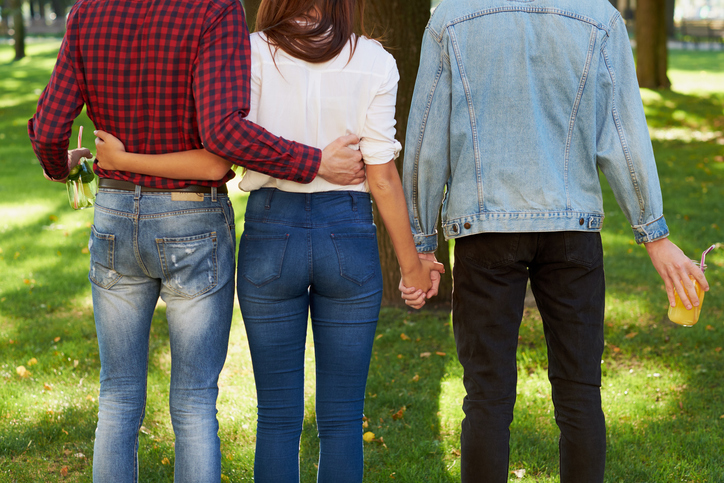 “We usually celebrate Valentine’s Day by going out for dinner and having a really nice, long, deep conversation,” says Tess. “The only difference with Valentine’s Day is we might dress up a little or choose a slightly fancy restaurant.” Like any long-term monogamous couple, the pair’s lives are incredibly intertwined and they spend holidays together, but Tess adds, “I think we would consider spending Valentine’s Day separately at some point.”

I also spoke to Emilie. This will be Emilie’s first Valentine’s Day as a poly person with two partners. They say that “it’s so beautiful” to be in a poly relationship, and that all three partners share holidays, special events, and birthdays together: “It’s more complicated, and the planning is a lot more tedious, but in the end it’s all about love.”

While I am in a monogamous relationship now, I did spend three years in a poly relationship.

In that partnership, I explored various ways of dating, celebrating pivotal events, and defining clear boundaries. It’s important to discuss your options with your primary partner. Since poly relationships come in all forms, with various dos and don’ts, it’s up to the people involved to create their own boundaries. In a poly relationship, especially a poly relationship with many partners, the people involved should remember to not make any partners feel unimportant. Discussing assumptions and expectations with a partner is considerate and important for a poly agreement.

Weigh out your options.

Since Tess and her husband are married, she says that their anniversary is usually the only special day she feels they should firmly spend together. “As we get further into this journey [as a poly married couple], I think it’s quite likely that we’ll meet more serious partners who we’ll incorporate into our lives more. I also think our society (especially people our age, late 20s-early 30s) are becoming a lot more open and accepting of non-monogamy, so it won’t be as big a deal or raise as many eyebrows in a few years,” she explains.

For others, it may not be so obvious regarding whom to “choose” for the special day. Since Valentine’s Day is on a Wednesday this year, consider instead celebrating the weekend before or the weekend after with various partners, if you find this feasible. According to Zola, only 3 percent of newlyweds would like to spend Valentine’s Day as a self-care day, but I find this to be a great idea — especially for couples or thirds who find the idea of making a choice to be daunting and stressful. Valentine’s Day doesn’t have to be the day when celebrations occur.

Emilie says, “I cannot expect my partners to read my mind. So, if I want to spend a holiday with one partner in particular, I need to communicate that clearly and early enough so that if there are any concerns, they can be dealt with in a healthy and loving manner.”

Since couple’s privilege may cause a third partner to feel left out or abandoned, remember to discuss your plans with everyone involved in the poly relationship. Emilie explains that the term “primary” can be used to “create a perceived hierarchy among partners.” They continue, “I’m still working on finding my own language to describe my relationships.”

Tess adds, “These days, I love to know that he is on a date with someone he really likes, and will probably have really great sex with them, and I get a lot of pleasure from him coming home and telling me all about the time they spent together. It’s the emotional intimacy, the trust, and the access I have to his mind that makes me feel close to him, no matter what he does with other people. So if either of us wanted to spend Valentine’s Day with someone else, I think we would both enjoy the conversation around that decision, and would get a lot out of that process.”

Polyamory is about shared experiences

Dossie Easton writes in The Ethical Slut: A Practical Guide to Polyamory, Open Relationships & Adventures, “It seems to me that faithfulness has very little to do with who you have sex with. Faithfulness is about honoring your commitments and respecting your friends and lovers, about caring for their well-being as well as your own.”

“This year’s Valentine’s Day is about to be a damn dreamsicle,” says Emilie. Their partner is dating someone new and wants to spend the night, and since Emilie isn’t a night person, they are going out together earlier in the day. In the evening, Emilie is sharing time with their other partner. Emilie continues, “We will probably send each other selfies. We have a group chat on Facebook and it’s disgustingly adorable.”

Being in a poly relationship doesn’t have to be stressful on a day dedicated to love. For poly couples, the more the better — and finding those boundaries and communicating truthfully can create an amazing day for all partners.