I have trichotillomania, and microblading my brows changed my life

This is a story about how cosmetic tattoos transformed me from a self-conscious person with mental illness to a glamorous, confident queen (who also still has mental illness, but hey, you win some, you lose some). Trichotillomania, or trich for short, is an impulse-control disorder (within the family of obsessive-compulsive disorder) that causes an insatiable desire to pull out one’s own hair. I have trich, and because of this, I have no eyebrows—literally zero-percent hair above my eyes.

When I first started experiencing trich symptoms, I turned to makeup. I tried every pencil, gel, and powder in the game and landed on what would become my all-time favorite brow product, the waterproof brow gel, Wunderbrow. I painted this liquid gel onto my face every day for months until I found eyebrow wigs. My favorite ones, from Cardani, are made from real human hair, applied like fake lashes, and can stay on for 12 hours at a time. This was an excellent solution until a year ago, when my anxiety medication made me gain a lot of weight. I decided to make a Lifestyle Change™ and started working out regularly. The same way you probably wouldn’t wear fake lashes to the gym, you can’t really wear eyebrow wigs. If you sweat excessively, they fall right off. Plus, they only lasted a few months, and at $50-$100 per pair, that meant I was spending a lot of money.

In two years, I had spent roughly $1,000 on eyebrow products. If I didn’t figure out another option, I was going to have to keep spending $500 a year to maintain my eyebrow wigs and still wouldn’t be able to work out comfortably. Enter microblading: a form of cosmetic tattooing that places pigment just below the skin on your eyebrows, giving you that full, roll-out-of-bed-with-perfect-brows look. It’s a serious commitment cost-wise, as it comes with a price tag of $600 and up. After a lot of research and some serious support from my partner, I booked a microblading appointment with NYC artist Saki Lee, who I can now say, with complete bias, is the greatest microblading artist in the history of microblading artists. You’ll soon see why. 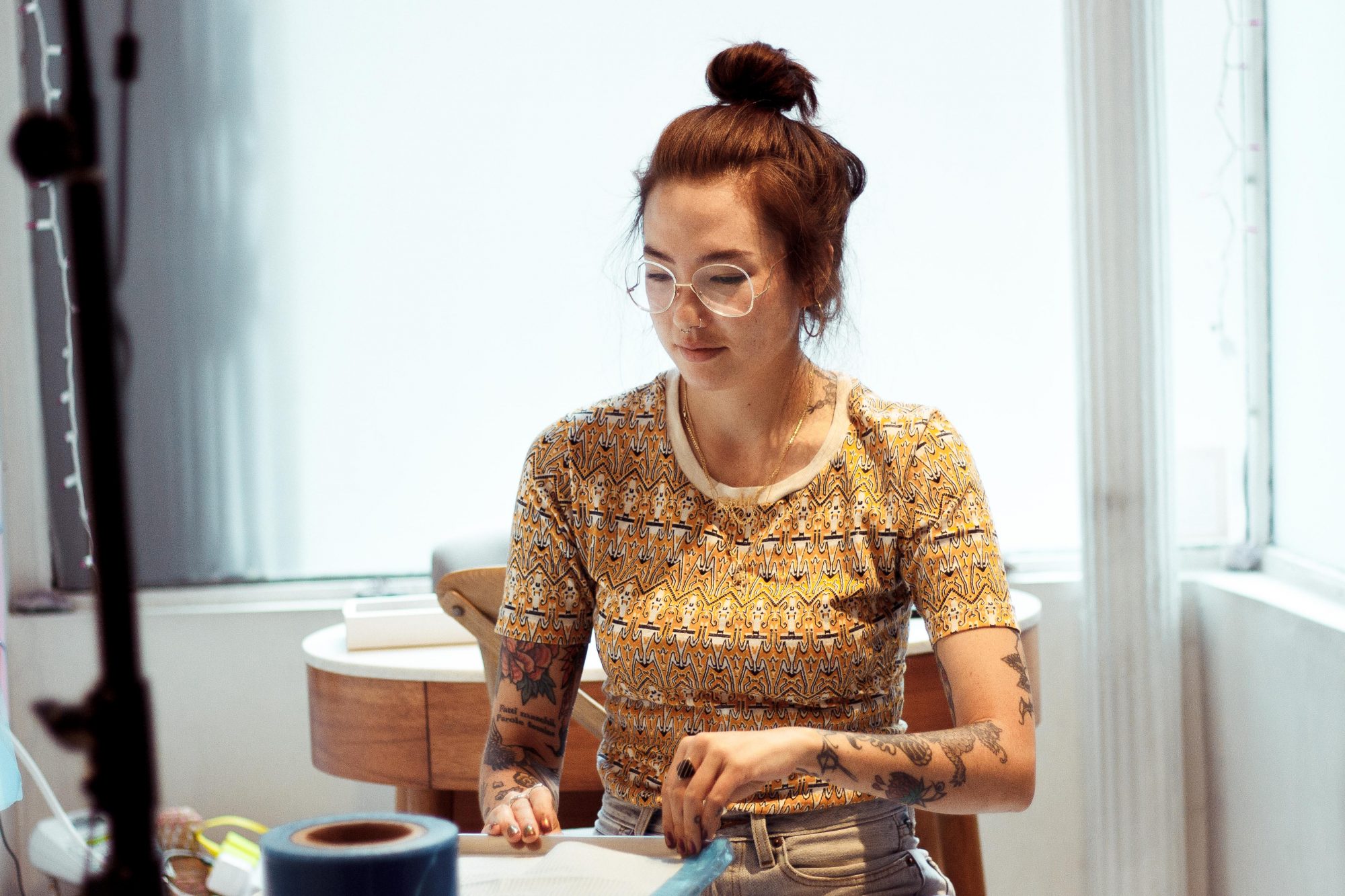 When I walked into Laurel NYC, a quaint, expertly designed studio in the East Village founded by Claire Vuillemot, I was greeted by a small woman with a ponytail, giant glasses, and the sweetest disposition. She told me to take off any makeup I had on, so with my heart in my stomach, I peeled off my eyebrow wigs. 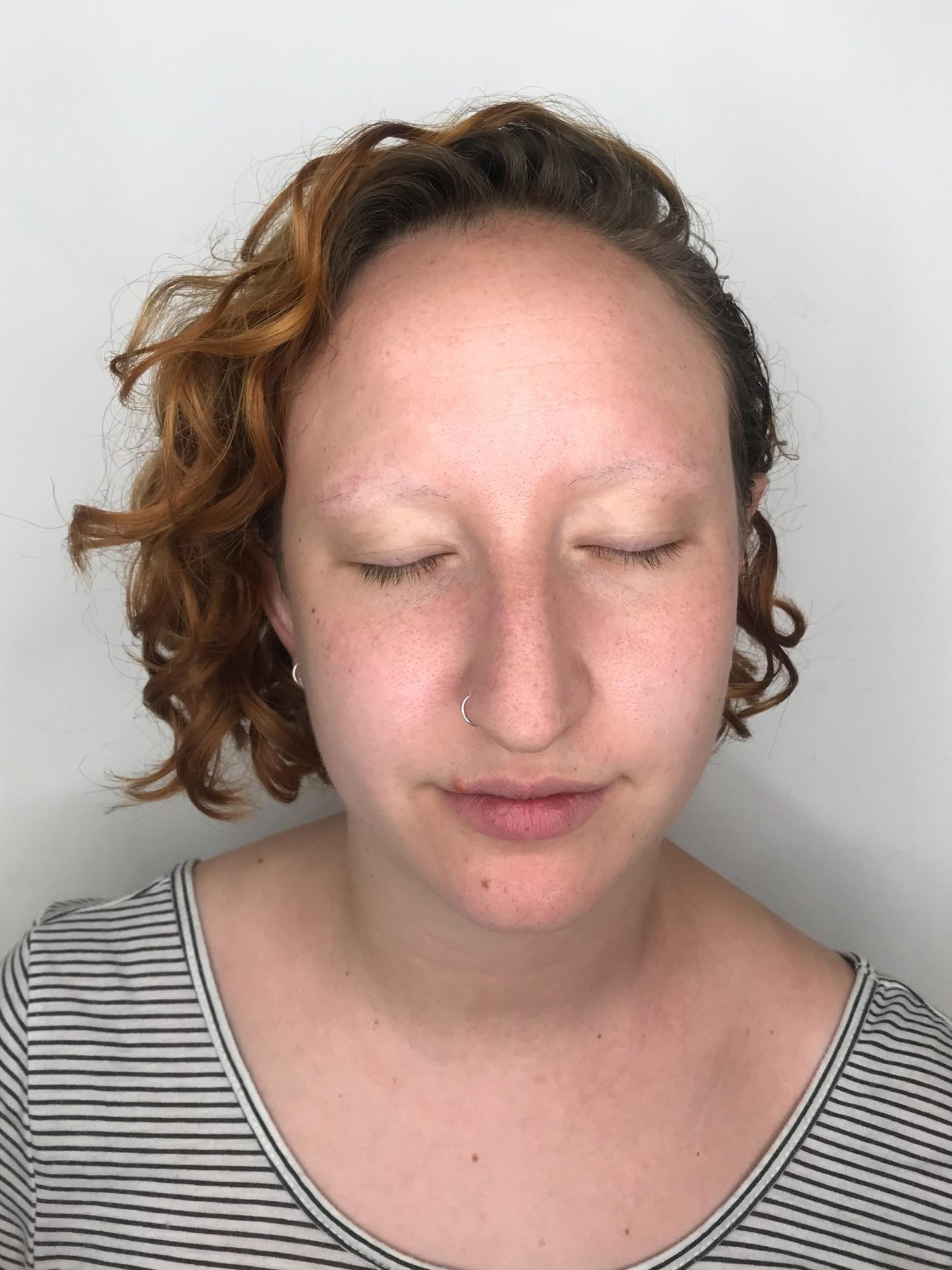 Without skipping a beat. Saki started to numb my face while telling me about another client she had with trich. I was thrilled that she broke the ice first. I had, of course, done thorough research to choose my artist, and had landed on Saki because her microblading work looked impossibly real, and because she had previously worked with people who had hair loss disorders. Saki revealed that microblading on hairless skin is both a blessing and a curse. “In some ways, I like it. It’s easier to see what I’m doing than it is when there is a lot of natural brow hair,” she told me. “On the other hand, my mistakes are more obvious. There’s more pressure. But you still have hair follicles, so I can follow your natural brow path.” 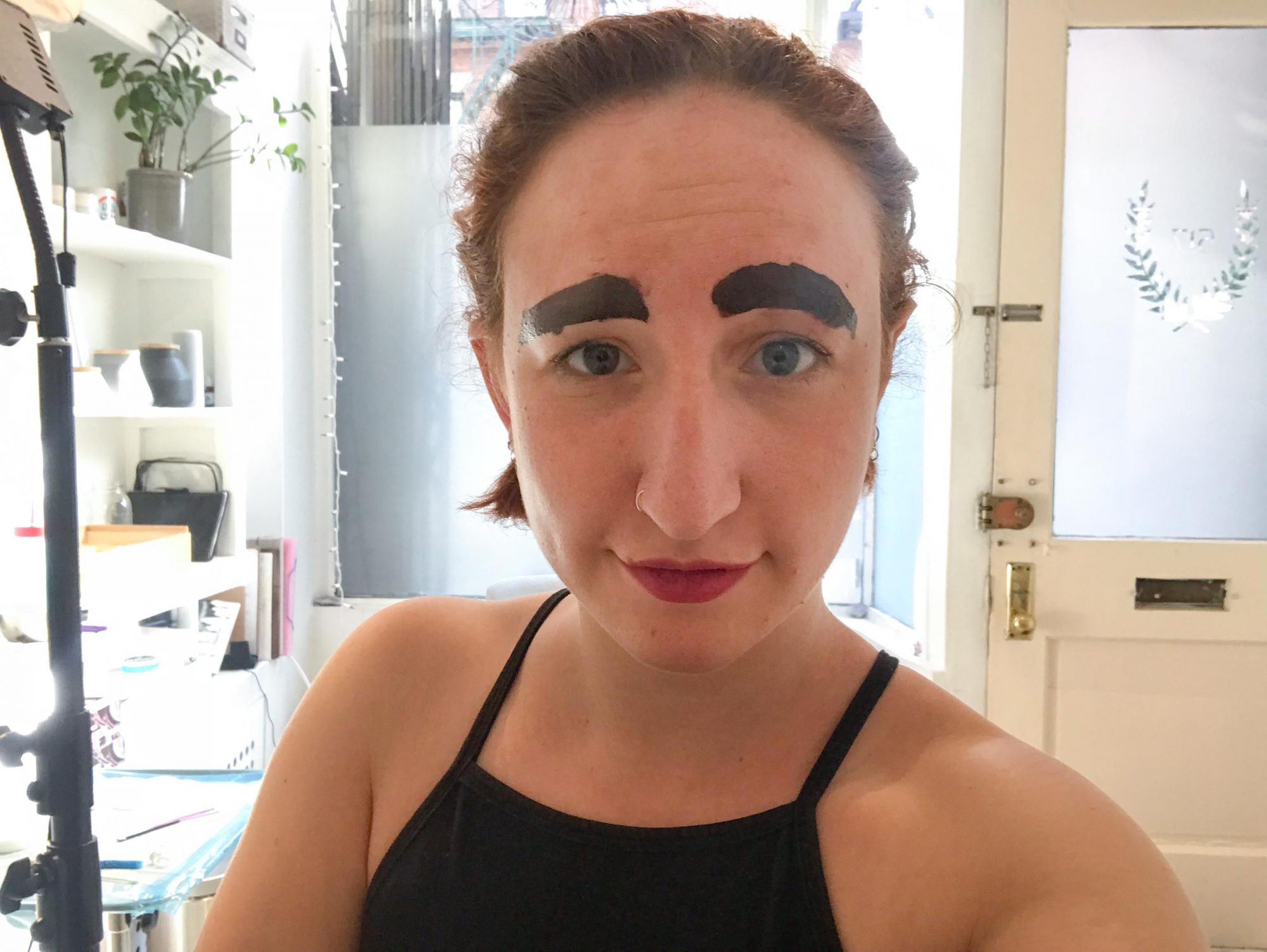 She took out a brow pencil and drew on some brows, then had me check to make sure I liked the shape and color. She then began scraping her microblading tool across my face. It hurt less than a tattoo but more than pinch. I kept my eyes firmly closed the entire two hours she worked on my face so I wouldn’t have to see the needles up close. Three rounds of microblading, numbing, and pigment masks later, I had the realest-looking brows I had ever had. Saki walked me through the aftercare procedure, which is not the same as traditional tattoo aftercare, and scheduled me for my touch-up (included in the $600 price). 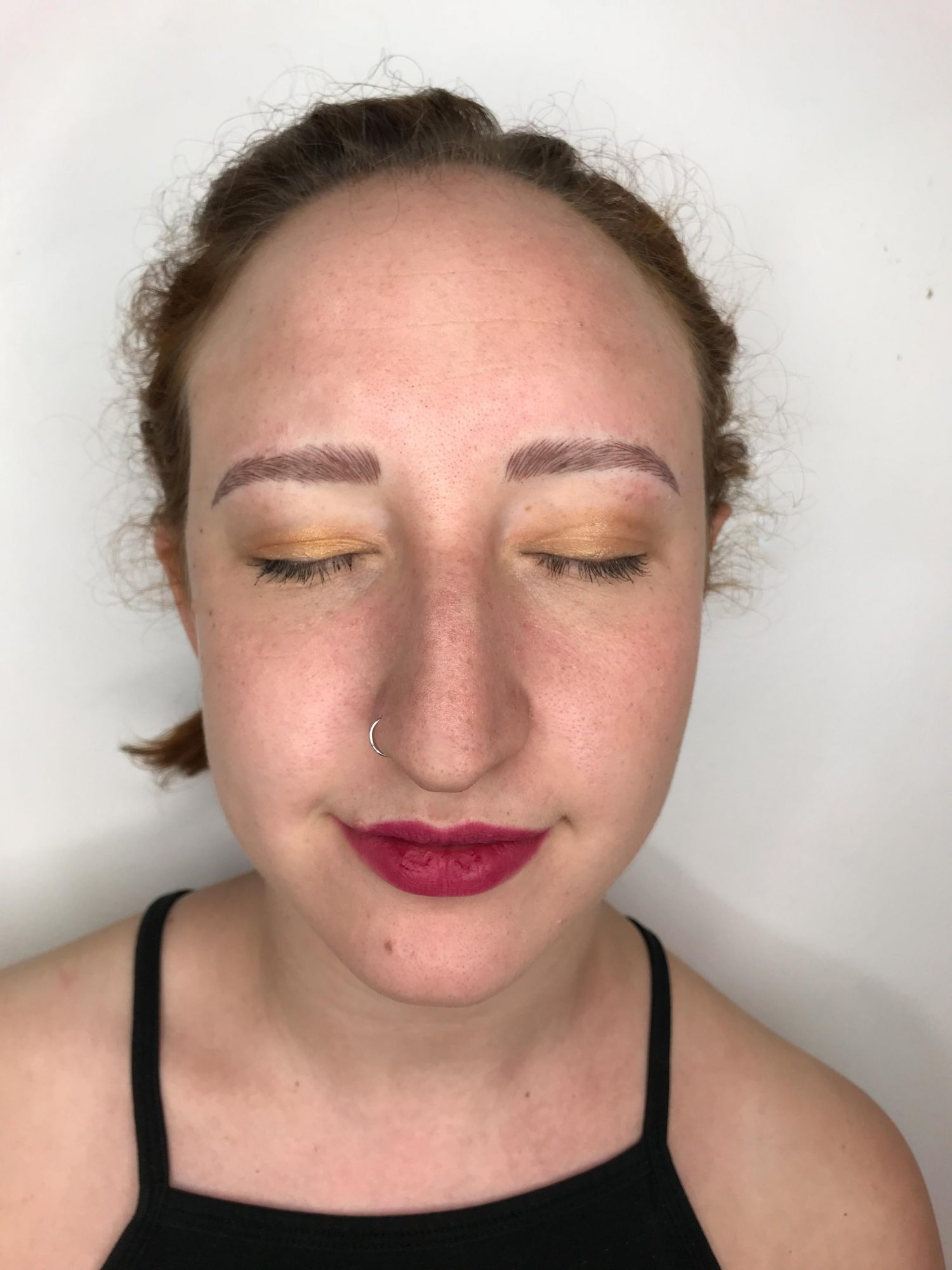 Saki’s method of healing included keeping my brows as dry as possible for 10 days. That meant no exercising, keeping my face out of the shower stream, and blotting my brow area five to six times a day. It also meant that I couldn’t touch my brows. For the first time in years, I took a break from pulling my brows, and it was, to be frank, excruciating. The moment I reached day 11, I started to pull again. At this point my eyebrows had mostly healed, but I noticed that the pigment wasn’t sticking everywhere. By the time my follow-up came six weeks later, my fully-healed brows actually looked like real brows, but were slightly lighter and patchier than I wanted.

The touch-up went really well. It barely hurt, I went a little darker and a lot fuller, and I left deeply satisfied. While my in-studio experience was spectacular, the healing was infinitely harder. After a month of having beautiful brows that I could also pull, I had to cease pulling again, and well, I failed. Six days in, I pulled a few hairs when I was bored at work. I haven’t noticed any big gaps yet, but I’m nervous the touch-up won’t stick as well. Saki warned me I may need a third session to get the best results, but knowing that I’ll need to get regular touch-ups if I continue to pull, I’d rather save my money for six months down the road.

So, here I am. I have incredible brows. They are truly a work of art, and I feel so lucky that Saki gave me such a gift. I can work out, swim, and my brows stay on my face. I can hide in plain sight. Perhaps my biggest takeaway is this: I am a person with mental illness and will probably always be a person with mental illness. I’m going to have good days, bad days, and really bad days. I will have to endure some mental pain, but for the first time in years I can wake up on a Sunday morning and stumble to the closest bodega for a bacon, egg, and cheese without taking 20 minutes to put my face on. I can wake up late for work, forget to put on brow gel, and still be passably healthy. I can take a dip in the bay off my grandparents’ house in the Florida Keys. I can live my damn life.

If you’re living with trichotillomania and you have the means to get microblading done, I can’t recommend it (and specifically Saki Lee) enough. It gave me my life back, and for that I am endlessly grateful.