How I Bought That takes a peek inside the process of making a major purchase, whether your budget is big, small, all your own, or supplemented by family and/or financial institutions. In this series, we look at many different spending situations, from how people afforded big purchases like first homes to electric vehicles to splurge-worthy bags.

I always described my post-grad dreams as a made-for-TV movie. I spent 22 years of my life in Kansas, and ever since I can remember—or maybe just since I started watching Sex and the City—I had plans to move to New York City to be a writer. Now, at age 23, it’s been almost a year since I first moved to Brooklyn without originally having a job. In the movie version of my life, I’d be the clumsy main character navigating the new city on my own, but in my honest narration, there are two supporting characters I just can’t leave out: my parents.

When my parents took me to visit my brother, who had just moved to N.Y.C., in 2015, my love affair with the city began. My family and I did everything first-timers were supposed to do: We rode bikes in Central Park, went to the Top of the Rock, paid too much for mediocre street food. As horribly cheesy as it sounds, I didn’t feel like a tourist; I felt like I already belonged there.

So I started manifesting it—working to speak and visualize my dream into reality. When senior year came around, I never dreaded the question, “What are your plans after graduation?” because I would confidently reply, “I’m moving to New York.” I did more than just talk the talk, too. I had several internships throughout college, established industry connections, and built my résumé. I give myself a fair amount of credit, but, in reality, I know that this story would not exist without the constant support of my parents.

They said this when my brother wanted to go to an expensive art school for college, and they said it again when he wanted to move to New York. They also said this every year that I wanted to play competitive volleyball and the fees kept getting higher. I knew that we didn’t have as much money as the families of my teammates who had pools in their backyards and got brand-new cars when they turned 16, but I never fully understood the difference between us. That’s because my parents never wanted me to. Only as I’ve gotten older have I learned that the words “we’ll make it work” really meant going into debt, taking out a second mortgage on the house, and my dad selling his old baseball cards to bring in some extra cash.

My parents shielded my siblings and me from money talk growing up. I think this was, in part, due to Midwestern manners. The rest, I know, was because they wanted us to believe that anything was possible without financial burdens getting in the way.

This is why I never questioned whether or not I would be able to move to New York. When it came time to find an apartment and start actually planning the move, my parents had agreed to be my financial safety net. (Only now do I realize that I never even had to ask.) After graduation, my best friend from high school and I started looking for apartments in N.Y.C. I interviewed for a few jobs post-grad, but I didn’t secure any offers, so I used an imaginary income to calculate what I could pay for rent. I found online that the average salary for an editorial assistant—my goal job—in New York City was around $35,000-$40,000 a year. With the idea that rent should be 30% of overall income, a rule of thumb passed down from various adults in my life, I calculated that I could potentially spend between $875-$1,000 on rent a month.

My best friend, a roommate I had yet to meet, and I decided on a three-bedroom apartment in Brooklyn that was $2,775 a month, $925 per person. By N.Y.C. standards, this is relatively reasonable, but going to my parents and asking them to sign on the lease with me felt pretty unfair. I had no job offer—and, even though I worked throughout college, I was terrible at saving, so, overall, I had very little money to my name. If my parents were a bank and I was asking for a loan, they should have denied me outright, but they didn’t. They helped me pay the deposit and drove me and a car full of my belongings over 12,000 miles to my new apartment. I had never felt so much guilt and gratitude at the same time, as I was preparing to leave my parents behind to live the life that they had made possible for me—but I knew that it was what they wanted, too. 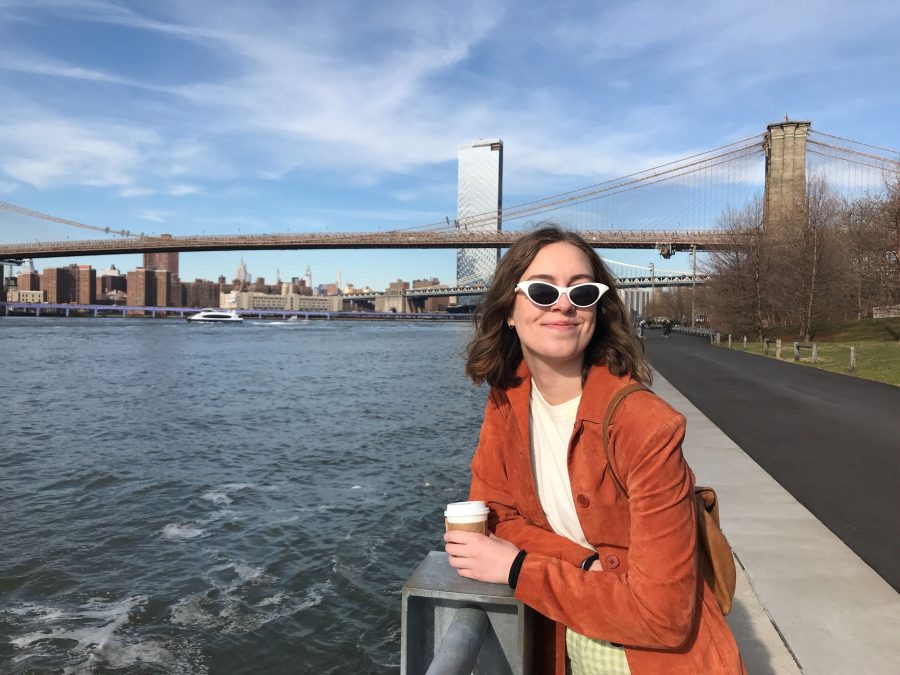 When I moved in July of 2019, I was lucky to be making some money from freelance writing, since I kept connections with an editor from my previous internship. In the first couple of weeks after moving, an alumna from my school connected me to another editor, which led to more freelance opportunities. I was able to pay the next month’s rent and part of the month after that, and it was incredibly satisfying to know that I wouldn’t have to ask my parents for money help. Financial independence has always been my goal so that I could relieve that burden from my parents. I felt like I was really doing the damn thing, living the city-girl hustle—but the jobs were few and far between and I knew the freelance income wouldn’t be sustainable for long. So I allowed myself the first month after my move to keep freelancing and applying for magazine jobs before I decided I would need to start a job as a barista to secure more income.

In mid-August, right around the same time I started training for my barista job, I was offered an internship at Paper Magazine. The catch? It was unpaid.

Alexandria Ocasio-Cortez’s line “Experience doesn’t pay the bills” kept running through my head, and I became acutely aware of the privilege I had to even consider an unpaid internship.

I believe that unpaid internships act as a gatekeeping mechanism, keeping out those who can’t afford to work for free. After talking with my parents and one of my old journalism professors, however, I decided to accept the internship in order to get my foot in the door into the industry. So I have to recognize that, even though my family isn’t the most financially stable, it was a financial privilege that allowed me to take on unpaid work and gain access to more of that experience capital.

Between my barista shifts and freelance work, I was usually able to pull together $925 for rent, filling up my bank account just enough to empty it on the first of the month. For other living expenses, I relied on my parents to fill in the gaps. I hated going to my parents for more financial help when they had already given me so much, but I can’t deny that part of my story. Without their safety net, I would’ve needed to pick up way more shifts and I wouldn’t have had as much time in my schedule to network, apply for jobs, go to interviews, complete edit tests, and—eventually—secure a full-time position.

My experience wasn’t entirely luxurious, but in addition to financial support, my parents gave me the gift of time and peace of mind—which was, without a doubt, a luxury. In early November, a few months after doing the freelance-writer/barista/unpaid-intern grind, I was offered the editorial assistant position at HelloGiggles, which I still have. The position pays enough that my current rent costs less than a third of my income, leaving plenty left over for me to feed myself, have a little fun, and make a small dent in the lifelong debt I want to repay my parents.

Just as my parents saw it as their duty to protect my siblings and me from the reality of money problems growing up, I now see it as my duty to do everything I can to resolve money problems in adulthood. Though my current income doesn’t allow me to magically erase my family’s debt, I’m working little by little to become more financially independent and provide financial help to them as I can. I have more dreams of my own to chase, like getting my own apartment someday and traveling abroad more, but my biggest dream is to relieve my parents’ financial burden and to do what I can to give them a piece of the privileged lifestyle they gave us.