How both pain and pride helped me claim my bisexual identity

When I first came out to my parents, I didn’t tell them I was bisexual. I explained to my mother that I didn’t want to be labeled, but I just happened to fall in love with a woman. Labels scared me, not because I wasn’t proud of who I was, but because I’d never had to choose an identity for myself before — I refused to let anyone make me label myself now. Why couldn’t I simply identify as “Hello, my name is Beth, and I’m in love with someone who loved me back?”

Throughout the first year I dated my partner, she always referred to me as the straight girl she snagged. I never owned up to being anything else, so why not? Refusing to be placed inside a box is a stance that often leaves that person standing outside all the boxes alone.

I no longer fit within the cookie cutter outline of a heterosexual relationship, yet I didn’t recognize myself as a lesbian.

Bisexual seemed too complicated of an identity, and besides, I had only dated one woman — so can I really claim the bisexual label? What if it’s just a one-time thing for me, even if it’s long lasting? 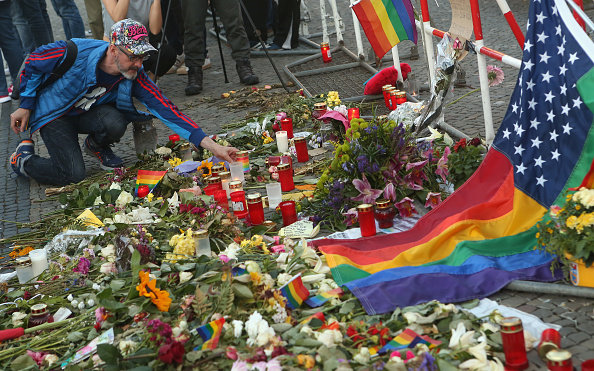 One year later, my partner took me to a vigil in Pittsburgh that took place shortly after the Pulse nightclub massacre.

This vigil was the first LGBTQ community event I had ever attended, and for the first time in my life, I felt like I had found a place where I truly belonged. Church groups spoke out against hate and for acceptance. Politicians stood in solidarity with us, committing to our side in the constant battle for equality. Activists made a call for action.

No one there cared how you identified — they only cared that you believed in everyone’s right to love who they love. One of the attending organizations unfolded a massive pride flag. We all stood together holding a piece of it, and that’s when I realized that these were my people. These open, loving, compassionate, welcoming human beings were mine, and I was theirs. So I shed my label rejections, and slipped into something a bit more bi.

This year, my wife and one of our best friends took me to my first Pride in Pittsburgh — the second organized LGBTQ event I have ever attended.

The impact of Pride’s infectious positivity was equal to — yet starkly different from — the impact of the Pulse vigil almost exactly one year ago. The emotions triggered by both events existed on such opposite ends of the spectrum, but they carried equal weight.

My experiences at Pride and the Pulse vigil reminded me of the line commonly spoken in wedding vows when each person promises to care for the other in both sickness and in health.

The Pulse massacre was a sickness from which we will never fully recover, but we’re fulfilling our promise to care for one another in our pain and through our healing. To me, Pride feels like the LGBTQ community’s healthiest moment every year, regardless of the political climate. A thin, wavering line exists between pure happiness and raw devastation, because they’re the peaks of our emotions. Everything else exists within that valley between them.

After the parade, my wife (that’s right, I held on to that one) walked through the streets of Pride, in awe of how much the Pittsburgh event has grown since she last attended five years ago. We often rightly wonder how far we’ve come since the Stonewall Riots, so the surge in public support during Pride is an important reminder of how many people are on our side.

A petition is circulating the city of Pittsburgh, asking the Mayor to make the rainbow painted-crosswalks a permanent fixture, celebrating Pride all year.

Just in case that doesn’t happen, my wife and I ventured over to the crosswalks before we drove back home that weekend. Not only did I make a point to capture that rainbow in a picture, but I danced in the crosswalk to celebrate my pride in who I am.

My name is Beth, and I’m a proud, bisexual woman.